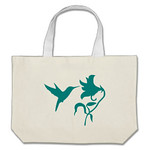 Five years ago I photoblogged the birth of two hummingbirds. The mother had built her nest on a storage hook hanging from a support beam underneath our patio overhang. Donna and I would watch her through the sliding screen door to the patio, then dash out to check on her eggs whenever she flew off. Later, we photographed the chicks as they grew into tiny hummingbirds. We were heartbroken when one died, but the other one lived, and there’s been a nest on that hook every spring since.

Probably there’d been a nest on that hook in previous years, and we just hadn’t noticed it. Hummingbirds live only three or four years, so the current nesting mother is most likely a child of the mother bird we first observed. And sure enough, there’s a new nest on the hook now, this time containing just a single egg.

I’m going to try leave this mother bird and her chick alone and not take too many photos, but of course I’ll take some. Like this one, which I took this morning:

I thought I might get some really good shots with our big digital SLR camera, but the nest is tucked up so tightly under the overhang there’s no room for it, and I’ll have to use our small point & shoot Canon G9 as before. Fortunately, it too is a very good camera … especially when I remember to force the flash to eliminate the shadow under the patio roof.

In other domestic news, Polly and her boyfriend David are taking our old couch away today, along with a gas barbecue we’ve been holding for her. When we got a new gas grill years ago we refurbished the old one for Polly, but it’s only now she’s finally able to take it off our hands. The old grill’s been on the patio long enough for at least two generations of hummingbirds to get used to it … I wonder if the current mother hummer will notice its sudden absence.

Donna says I need to get out and expand my social circle, so yesterday afternoon I went to a Baja Arizona Kossacks meet-up. When I started contributing diaries to Daily Kos a representative of the group, which is composed of dKos diarists who live in the Tucson area, invited me to join. I did, and we started exchanging messages and comments. Well, now I have faces to go with names, and I’m glad I forced myself to be sociable (so unlike my normal self). Members of the group are mostly men and women of my own age, politically progressive and with a wide range of interests, and I think I made some new friends. I’ll certainly go to future meet-ups. By the way, if you click on the Baja Arizona Kossacks link, there’s a live blog of yesterday’s gathering (with incriminating photos).

Interestingly, yesterday’s host had an old BMW motorcycle under the carport, and I instantly fell in love with it. When I asked him about his bike he told me he doesn’t ride much any more and is thinking of selling it. It’s a bit rough and needs some work, but might be just what I need. In a previous post I talked about replacing the Goldwing, which is stupid because the Goldwing is the perfect ride for me … but maybe what I really want is a vintage bike to tinker with and use as a townie, saving the Wing for longer road trips. Here’s a photo, not of my host’s bike but one of the same model and year:

What do you think? Is it me?