Air-Minded: On a Boom and a Prayer

There I was, inverted, at 40,000 feet and Mach 2.2 … here’s a war story I first posted in August, 2007. I’m bumping it up to the top of the blog because it’s a good one and I suspect few readers get into the archives, what with the press of busy lives and current events. Please enjoy. Every word of what you’re about to read is true. —Paul 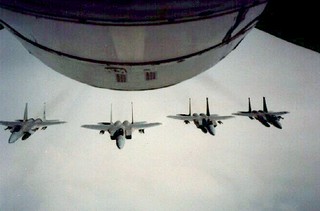 Here’s a war story for a Sunday afternoon.

It’s about an aerial SNAFU* I was involved in one day while leading a four-ship of F-15s in Alaska. An F-16 squadron from the Lower 48 was visiting Elmendorf Air Force Base, flying dissimilar air combat training with our squadron. It was a beautiful but cold winter day when we launched: light rains in the Anchorage area, good ceiling and visibility, forecast to get even better, no alternate landing field required.

Just about the time my wingmen and I were hitting bingo (enough fuel remaining to return to base and land safely), the temperature at Elmendorf suddenly dropped to 20 below. Since the ground was already frozen, the water on the runways instantly turned into ice and the braking action went to zero. One F-16 pilot couldn’t stop on landing, so he lowered his hook and took the cable on the east/west runway. Two minutes later a second F-16 took the cable on the north/south runway. There were sixteen jets still airborne, eight F-15s and eight F-16s, all of us now at or near bingo.

Fighters don’t carry a lot of fuel, and what they carry they burn at a great rate. Although we had enough to return to Elmendorf, take our turns in the pattern, and land, we didn’t have enough to wait for the cable crews to get the F-16s clear of the runways and reset the cables, a procedure that can take twenty to thirty minutes. That’s how tight we were on gas.

For some reason (I seem to recall it was mainly political) we were not allowed to land at Anchorage International Airport, even though the runways there were equipped with cables. Since two KC-135 tankers were airborne in the local area, the Elmendorf supervisor of flying radioed the flight leads of the F-15 and F-16 four-ships, directing us to rendezvous with the tankers, offload a couple of thousand pounds each, and fly to the nearest “legal” alternate, King Salmon Air Force Station, some 350 nautical miles to the west.

Refueling and flying on to an alternate would have been a cakewalk if there were only four of us, but sixteen? I was leading the first four-ship to reach the tankers, which were flying in a lead/trail formation about five miles apart. We rejoined on the trailing tanker and I cleared my number four, who was lowest on fuel, to the boom. By then we could hear the second Eagle four-ship checking in and starting a rejoin on the lead tanker.

As four approached the boom, the F-16s checked in on our frequency, and they didn’t sound like they had a whole lot of gas to play with. This racheted up the pressure and number four got nervous and started ham-handing his stick . . . it took him an agonizingly long time to settle down and connect with the boom. By then one of the Viper four-ships was lined up one mile behind us and the flight lead was asking me if I could drop my guys back and let them refuel first. A similar conversation was going on between the Eagle and Viper flight leads on the lead tanker.

Fortunately we were above the weather and in visual contact with each other, sixteen fighters and two tankers, and we were headed west toward King Salmon as we refueled. I asked number four to come off the boom after taking on just a few hundred pounds. I’d already checked two and three’s fuel, and knew we had just enough to wait while the Vipers refueled . . . as long as they got on and off the boom smartly.  Fortunately for us the Viper pilots were crusty old Air National Guard types with tens of thousands of hours between them, each one an airline pilot in his other life.

The F-16s refueled in a heartbeat and we were back on the boom, then on to King Salmon. The two flights on the lead tanker refueled and followed us to King, where we all landed. The tankers, bless their hearts, had enough fuel to orbit Elmendorf for hours (even after refueling sixteen fighters) so they were able to wait out the cable crews and eventually land there.

The rest of us gassed up at King, and an hour or two later took off again for Elmendorf. By the time we landed and debriefed the officers’ club was closed. Too bad . . . we all could have used a drink.

It occurred to me, as I was getting ready to climb in bed at home, that the moment the two F-16s closed the runways at Elmendorf we should have headed for Anchorage International, politics or no. We were in a tight situation. Even though the supervisor of flying directed us to refuel and fly to King Salmon, I was stupid to accept his decision. One screwup and we’d have lost one or two jets to fuel starvation . . . no, let me rephrase that: as a flight lead and the senior pilot airborne that day, I would have lost one or two jets. It would have been my fault, not the SOF’s. And all this time Anchorage International, with two long cable-equipped runways, was five miles south of Elmendorf AFB . . . right where it always was (and most likely still is).

I didn’t get much sleep that night.

* SNAFU: situation normal, all fucked up.

3 thoughts on “Air-Minded: On a Boom and a Prayer”