It’s in the Bag 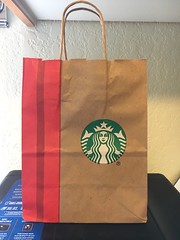 What’s in the bag? Why, baby Jesus, the reason for the season! Now begone, Ghosts of Fox News Past, Present, and Future, and take your #WarOnChristmas with you!

Gotta be honest, we’re not feeling it this year. Granted, the holiday spirit kicks in later every year, and Christmas is still ten days away, but something’s off this year and we both sense it. By mutual consent, there’s no tree in the living room, no lights hanging from the eaves, not even a wreath on the door. Not saying it’s not gonna happen, but so far we’re meh about the whole thing.

Nor am I saying we’re sad or feeling bah-humbugish; we’re our normal reasonably happy selves. We’ve done our seasonal due diligence, sending out letters and cards to family and friends, buying gifts to exchange, planning festive Christmas Eve and Christmas Day meals. Maybe it’s just that the last traces of childish anticipation, now we’re both firmly in our 70s, are gone. Maybe it’s our growing apprehension over what Nancy Pelosi calls Trump’s “monstrous endgame,” and the knowledge that we live among people who look and act like us on the surface but who, underneath, would happily watch the less fortunate die rather than see them get taxpayer-funded medical care, while rounding up and deporting anyone who doesn’t look and talk like them.

Well, before I go off the deep end, let me put in a positive word for the cheering effect of pets. Last night, as I prepared the curry and peanut sauce for chicken satay, two brownish blurs streaked between my legs and around the corner of the kitchen island before my eyes could register what I saw. I heard the doggie door slap twice in less than a second, and a Yip! as a hurtling body collided with its edge.

“Donna,” I said, “did you ever see Maxie and Mr. B chase each other like that before?” And she said, “That wasn’t Maxie, it was one of Polly’s cats.” I should have known. The rule is the cats aren’t allowed out of Polly’s room, but inevitably they encroach and slowly become part of the household (not unlike Polly herself, now embarking on her third year in the guest bedroom, a condition best defined as homelessness-but-for-parents-to-live-off-of … and now, I think, I may be zeroing in on another reason behind our holiday blahs).

One of the main Christmas gifts I ordered for Donna came in a less-than-plain, clearly-marked envelope, and wouldn’t you know Donna brought in the mail that day. It’s okay, though, because I have a pretty good idea what she ordered for me, and I know we’ll both be pleased. Donna and her friend Mary Anne are taking a three-day road trip between Christmas and New Year’s Eve, and I might hop on the motorcycle and go somewhere myself (destination TBD, but there aren’t that many possibilities this time of year that won’t involve below-zero temperatures on at least part of the route, so it may have to be a couple of out & back day rides instead).

I haven’t blogged about words and language lately, so here’s one for my fellow English majors: 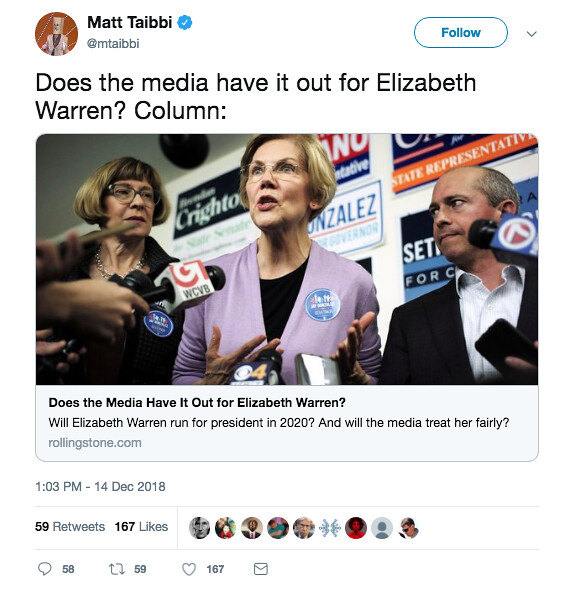 Is “have it out for” a regionalism? I grew up with “have it in for,” and I’m from the Midwest, so maybe people say it differently in other parts of the country and this is just the first time I’m seeing it. Any experts out there?

By the way, Elizabeth Warren and I have something in common. We both took DNA tests. I wanted to verify what I’d always been told, that I come from an unbroken line of whitey tighties (check). She wanted to find out if family stories about a native American ancestor were true (they were). They say Warren damaged her chances at a presidential run by taking that test, even though any one of us would have done the same. Maybe we should all agree humans are humans, no matter our genetic makeup. Maybe our country will decide to take a cruelty break over the holidays, putting the monstrous endgame off a week or so. Maybe pigs will fly, and maybe we’ll put out an inflatable Santa at the last minute.

One thought on “It’s in the Bag”