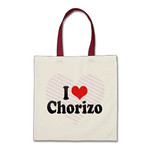 One of Tucson’s attractions is its abundance of carnicerías, Mexican butcher shops, each with loyal customers who swear by their favorite shop’s hand-made chorizo. We buy our chorizo at Safeway, philistines that we are, but the brand they carry actually does come from a local carnicería, and that’s what we had for breakfast this morning, scrambled with eggs, flour tortillas on the side.

Polly slept over last night. Donna and I kick the covers off in our sleep, so I closed our bedroom door lest Polly see our nakedness and die of shock. That in turn guaranteed that at some point in the night Mr. B would wake up and realize he was locked in the bedroom. That happened at 4 AM. We got up and cracked the door for him, at which point he curled up in his doggie bed and went back to sleep. He just wants the option, that’s all. I get that.

“Sovereign citizens” and Bundy Militia types have a boner for county sheriffs, have you noticed? Besides yammering about maritime flags and posse comitatus, they hold up elected country sheriffs as the only legitimate authority, whose word trumps not only state and federal judges but other law enforcement agencies, from the FBI all the way down to local police departments.

I hadn’t made the connection between the sheriff fetish and racism before, but yesterday Attorney General Jeff Sessions, a former Deep South senator with a lifetime history of racist and segregationist activism, praised sheriffs as a “critical part of the Anglo-American heritage of law enforcement,” and it all clicked into place. Sovereign citizens, the Tea Party, evangelicals, armed militia groups, survivalists, Trump voters, Republicans in general? They’re all one, and the thing that unites and motivates them is race.

I realize the rest of you came to that conclusion long ago. Well, me too, but sheriffs weren’t in the mix until Sessions made the connection explicit.

Here’s another fetish for you: Yeti products. I bought a Yeti coffee thermos a few months ago. Every time a millennial or Gen Xer comes by the house, it disappears. It eventually comes back, but sometimes not for weeks.

Only a fool would believe Trump’s proposed increase in the military budget will go toward pay, retirement, or health care. It would be nice if some of the money was used to pay for more training hours and better equipment, but I suspect almost all of it will go directly to defense contractors. Major General Smedley D. Butler nailed it back in 1935: War Is a Racket.

Like attracts like, and nowhere do we see that more clearly than in the Trump White House. We’re nowhere near the bottom, if there even is such a thing (and I’m beginning to believe there isn’t).

On a more cheerful note, I’m off to the library for a reserved book that has come in, then to Safeway to get what I need to make a Valentine’s Day dinner for my bride.