I recently dug out Keo’s Thai Cuisine, a cookbook that’s been sitting on our shelf, unopened, since 1992.  What got me off my ass, Thai-cooking-wise?  Shame. 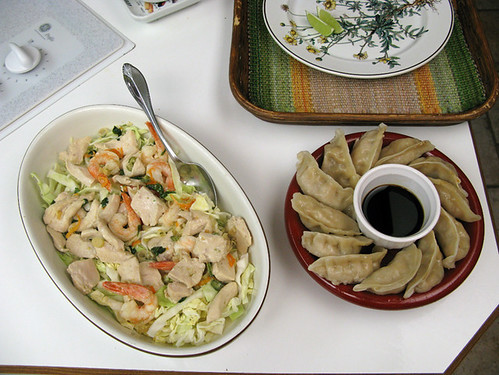 You see, I admitted on Facebook to making Pad Thai from a package, and one of my friends called me out on it: “You didn’t make it from scratch?”  I responded by whining “It’s haaaaaard,” by which I meant that it’s difficult to find the right ingredients in Tucson, Arizona.

But is it really?  I began to wonder, and pretty soon I’d dusted off Keo’s cookbook and started writing grocery lists.  So here we are, my first attempt, truth be told probably not a real Thai recipe at all, just some Americanized concoction Keo whips up for the haoles in Waikiki.  Still . . . I present my version (modified for southwestern desert denizens of the USA) of Keo’s Evil Jungle Prince with Chicken (& Shrimp):

Cut chicken into thin 2-inch strips. Grind together red chili peppers, lemon grass, and kaffir lime leaves in a food processor or pound in a mortar. Heat oil to medium high and sauté pepper mixture for three minutes. Stir in coconut milk and cook for two minutes. Add chicken and shrimp and cook for five minutes or until cooked. Reduce heat to medium low. Stir in fish sauce, salt, and basil. Serve on a bed of chopped cabbage.

I wasn’t able to find everything:

I didn’t expect to find lemon grass, but Sunflower Market has it (and, I would guess, Whole Foods). If you can’t find lemon grass where you are, you can zest a lemon.  Most supermarkets carry coconut milk; it comes in cans and is shelved with Oriental foods.  Fish sauce is an Oriental cooking staple; you should be able to find it anywhere.  Using peanut oil is my idea . . . Keo just says “oil” but I use peanut oil for anything Oriental.  Adding shrimp was also my idea; Keo’s recipe calls for chicken only.

I ground up the peppers, lemon grass, and zested lime with mortar & pestle, but next time I’ll use the food processor.  Lemon grass is hard and woody, and mortar & pestle doesn’t really do the job.

I wasn’t sure this one dish would be enough, so I picked up a package of frozen potstickers at Sunflower (it came with the packet of sweet dipping sauce you see in the photo). Not exactly Thai, but it went well with the Evil Jungle Prince.

Very tasty and Thai-like.  I am emboldened now, and working my way up to some Thai curry dishes.  Hence the new recipe category added to this blog today: Thai.

Update (3/23/10): Took another whack at this dish tonight.  Used less chili, added some items for color.  Here’s a photo of the ingredients: 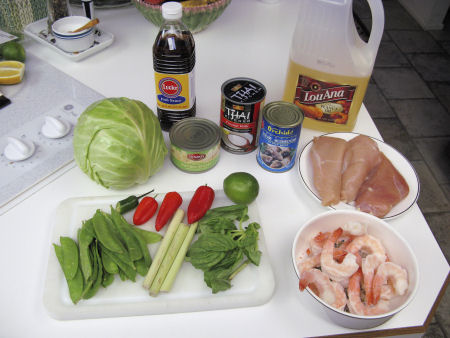 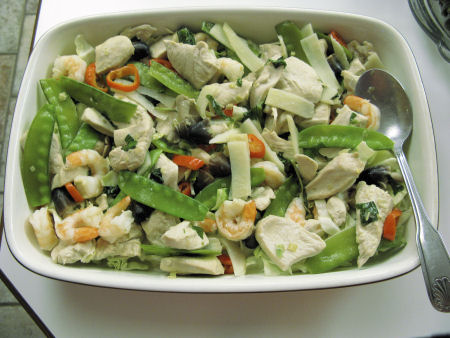 The extra ingredients were right on.  I cut back the chili too far, though, and the result was decidedly less spicy.  Next time more chili, though not as much as on the first try!

Look at that S Car Go!