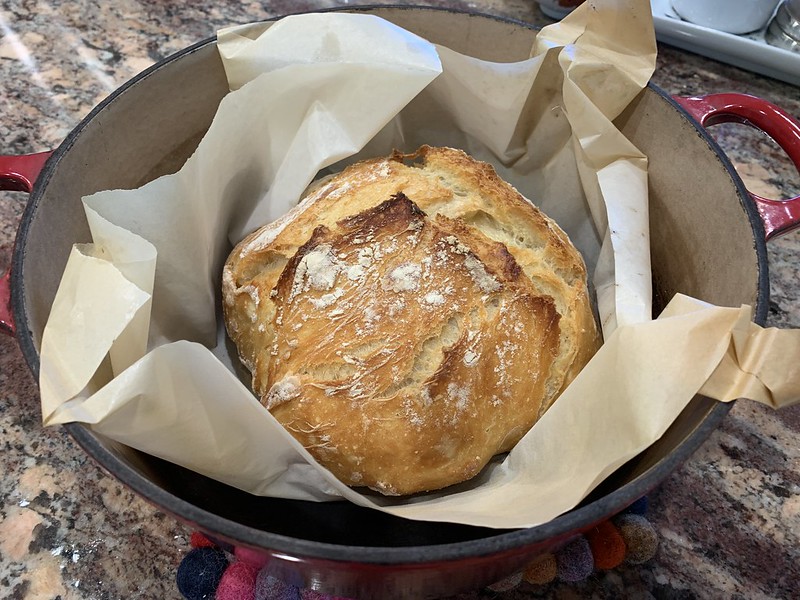 This is adapted from several similar no-knead bread recipes I found online, and may I say how much I hate food and recipe bloggers who make you scroll and scroll to get to the information you came for; namely, the ingredients and instructions?

Crouton’s Kitchen readers, I promise to give you want you want right up front.

Whisk flour, salt and yeast together in large bowl. Add water and stir until dough forms. It’ll be wet and sticky to the touch. Cover bowl tightly with plastic wrap and set aside in a warm place overnight or until dough rises, bubbles and flattens on top.

Heat oven to 450° F. Once at 450°F, place a 6-quart Dutch oven (lid on) in the oven. While the Dutch oven is heating, punch down the dough and scrape it from the bowl onto a sheet of lightly-floured parchment paper. Put a little flour on your hands and shape the dough into a ball. Cover it with plastic wrap and let it rest until the Dutch oven has heated up to 450°F, about 30 minutes.

Remove Dutch oven from oven. Remove the plastic wrap from the dough and lower it, still on the parchment paper, into the Dutch oven. Put the lid back on the Dutch oven and return to oven.

Bake at 450°F for 45 minutes covered, then another 10-15 minutes uncovered until bread is baked through and golden brown on top. Let cool on a wire or wooden rack before slicing. 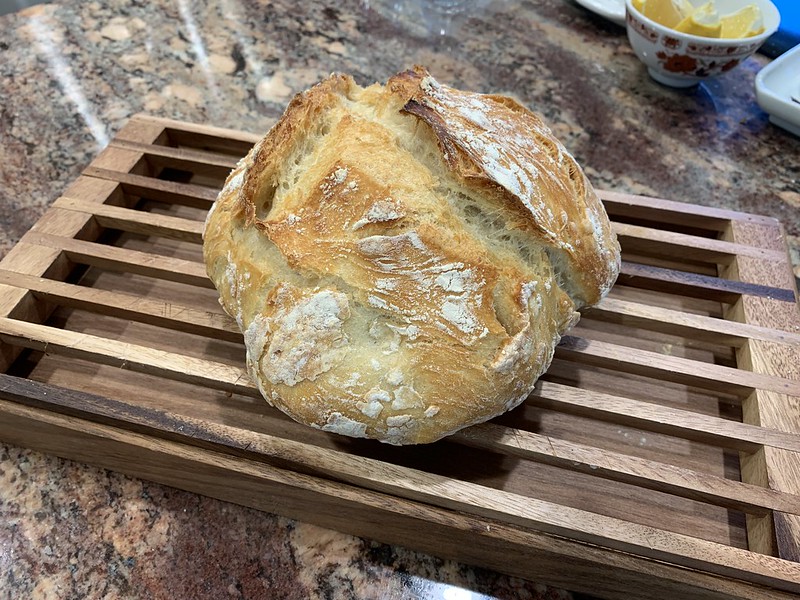 Some no-knead bread recipes say to let the dough rise for as long as 24 hours; some specify shorter times. I’d go with overnight: make the dough in the afternoon, bake it the following morning.

Shouldn’t have to say it, but be careful handling that 450°F Dutch oven when putting the dough in and removing the finished bread, and be extra careful where you put it after removing the bread. It’s going to stay hot a long time! Probably the safest place to put it is right back in the oven with the door closed, so no one inadvertently touches it until it’s had a chance to cool down.