People who don’t know any better are starting to think the F-15 Eagle … like me … is ancient history. Witness this BBC News story, gleefully shared by a Facebook friend: 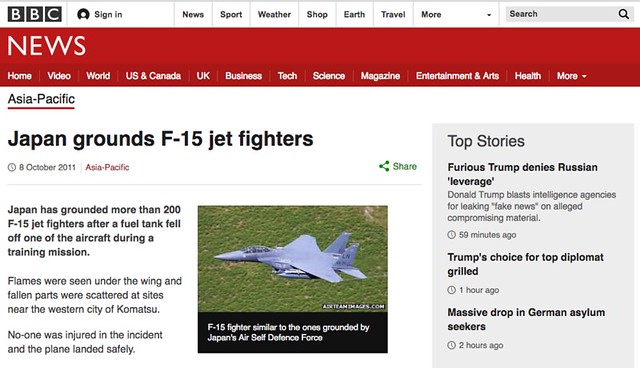 The linked story describes how Japan grounded its Eagle fleet after a fuel tank and training missile fell off a wing of an F-15J during a training mission.  From the article:

Japan Air Self-Defence Force officials said that all missions except emergency scrambles were suspended and will last until the safety of Japan’s 202 F-15 fighters has been confirmed.

The latest incident comes as Tokyo is seeking to replace its aging fighter jets. It is considering both US-designed aircraft and the Eurofighter Typhoon in a deal expected by the end of the year and worth more than $8bn.

Aging?  I thought that adjective was reserved for the B-52 Stratofortress, which has been around since the 1950s, and of which it is often said the youngest pilots to fly it haven’t been born yet.

In any case, when a fuel tank and training missile drop off a wing, the cause is far more likely to have been a pilot-induced oops than anything to do with the age of the aircraft.  You never touch the selective jettison controls unless you mean it.

Of course this is not to say the F-15 isn’t old.  Just that this incident in Japan doesn’t seem to have anything to do with age.  You want to read about an F-15 accident that had something to do with the age of the airplane, click here.

One of the historical aircraft I tell Pima Air & Space Museum visitors about is the Hawker Hurricane, a famous Battle of Britain fighter.  When I show them the Hurricane I always point out its distinctive stirrup:

Of course the stirrup is there to help you climb up onto the wing, which you must do in order to get to the cockpit.  And that allows me to ask the crowd if they know why you always climb into an airplane from the left side, rather than the right.

Supposedly it’s a holdover from the cavalry days: you mount a horse from the left side.  Don’t know if there’s any truth to that, but it’s a good story.

Now by “airplane” I mean mostly fighter-type aircraft with either a single seat or two seats fore & aft.  Granted, a lot of light aircraft … Cessnas and such … have side-by-side seats with hatches or doors on both sides, as do airliners.  But fighters, yeah, you mount from the left.

Yesterday, though, I got to thinking about it, and it hit me there are at least two aircraft on display at the museum that were designed to be mounted from the right.  Neither is a fighter, true, but both are fore & aft seaters: the Curtiss O-52 Owl and the Columbia XJL-1.  Of the two, the Owl is more obviously meant to be entered from the right:

The Columbia XJL-1, a seaplane, is a little less obvious.  It has recesses with hinged cover plates on the right side.  The idea is that you stick your hands and feet into the recesses and use them as a ladder to climb up to the wing and cockpit (you can see them in this photo, just ahead of the wing):

The Owl does not have a similar door on the other side, nor does the XJL-1 have steps and handholds on the left.  In the case of the Owl, I can see why the hatch is on the right: if you look through the cockpit to the left side you’ll see that the throttle and prop controls are on that side, right where the hatch would otherwise be.  But the seaplane?  Who knows?  Maybe the Navy just likes to be different.