Air-Minded: Eyes in the Sky

Air-minded.  Wow.  There’s a phrase I haven’t heard since I was an air-minded kid.  I ran into it again this morning in an online article at The Awl.

“Are You Airminded?”
The Slang Of War

“Airmindedness” is a term that used to be everywhere and now it’s nowhere. The word, as defined by the OED, means an interest in and enthusiasm for the use and development of aircraft. The expression emerged with the development of the airplane in the early twentieth century, during which an entire generation struggled to expand their conceptual boundaries skywards. Prompted by the invention of mechanical flight, this airminded cultural moment was sustained by the military incentives that ceaselessly pushed for improvements to air power.

Plenty more where that came from.  Well worth a read, my air-minded friends.

Air-mindedness arguably peaked in WWII and the early jet days, when aviation was advancing by leaps and bounds.  I was born just after WWII and first became fascinated with airplanes as a boy during the Korean conflict.  I stayed that way all through my teen years, building model aircraft and reading about flying.  I used to put myself to sleep by imagining myself in some sort of complex cockpit, soaring through the sky … a habit I carried well into adulthood.

So I guess it’s no surprise I eventually joined the US Air Force and learned to fly, where the reality of mastering a complex cockpit and soaring through the sky turned out to be even more fun than the dreams.

I’ve been out of the cockpit almost 14 years.  For the first 8 of those years I kept my hand in as a defense contractor, conducting and developing ground training for USAF pilots, so really I’ve been away only 6 years.  And now I’m a volunteer docent at the Pima Air & Space Museum, tantalizingly close to the cockpit once again, telling people about aviation, airpower, and airplanes a couple of hours every week, even starting to dream about flying again.

Maybe I’ll never grow up … and what’s it to you, buddy?

At the air museum, the first aircraft I show my tour groups is a replica of the original Wright Flyer.  I tell visitors that when the US Army awarded a contract for improved Flyers to the Wright Brothers in 1908, it envisioned using the revolutionary machines as observation platforms, like the manned observation balloons used by the French at the Battle of Fleurus in 1794 and the Union Army at the Battle of Bull Run in 1861.

Later in my tour I spend some time talking about our SR-71 Blackbird, a slightly more high-tech development of the original Wright Flyer, used for essentially the same purpose: observation.

But hanging over the Blackbird, suspended by wires from the roof of the hangar, is an even spookier observation aircraft, the Lockheed YO-3A Quiet Star. 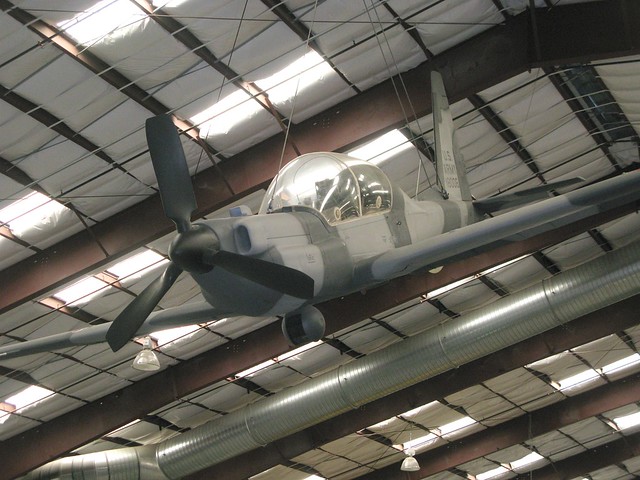 The Quiet Star was developed during the Vietnam conflict to observe North Vietnamese Army and Viet Cong troop movements.  What’s spooky about a small, propeller-driven aircraft?  It was, as its name implies, quiet.  Flying at treetop level at night, enemy troops couldn’t hear it.  Remember the stealth helicopter in the 1997 Mel Gibson movie, Conspiracy Theory?  Yeah, like that.  Only quieter.

The Quiet Star started life as a glider, so it was silent to begin with.  Lockheed added a heavily muffled engine and slow-turning three-bladed prop.  How quiet was it?  Flying as low as 200 feet over enemy troops at night, not one was ever shot down.  Not one ever so much as took a round.  Maintenance troops used to stand by the runway at night, listening while the Quiet Star landed, and if they heard anything the aircraft was grounded until they could repair it and make it quiet again.

In its day the Quiet Star was as classified as the Blackbird.  One landed at my pilot training base (Vance AFB in Enid, Oklahoma) in 1974.  It arrived in the dark of night and they folded the wings and wheeled it right into a hangar to keep Soviet reconnaissance satellites from photographing it.  The only reason I knew it was there was that I caught a glimpse of it through the partially-opened hangar doors when I was walking out to my airplane the next morning.  I knew right away it was something special, but it was years before I could find out anything about it.

Quiet Stars went into civil service after Vietnam.  The  Louisiana Department of Fish and Game flew them over swamps and bayous at night to catch poachers.  The CIA, we’re told, is not allowed to spy on Americans at home, but the FBI is … and they had Quiet Stars too.

I don’t know about you, but I find all this stuff fascinating.  It’s because I’m still air-minded.  Which is not at all the same thing as being air-headed!

One thought on “Air-Minded: Eyes in the Sky”