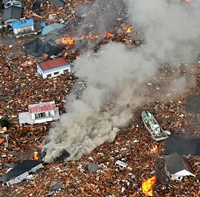 Nancy Nall on today’s earthquake in Japan: “I’m touched by the grocery-store employees whose first impulse is to try to protect the stock from falling off the shelves. We give our lives to our jobs and we take pride in even the smallest ones. We deserve a few benefits in the bargain, Gov. Walker, you jerk.”

Another observation, spotted on Twitter early this morning, posted by @daveewing: “The headline you won’t be reading: ‘Millions saved in Japan by good engineering and government building codes.’ But it’s the truth.”

Word.  Our military has plenty of personnel and equipment in Japan, and I’m certain we’re already busy trying to help.

But what’s this I hear about the Republican Congress planning to cut funds for the Pacific Tsunami Warning Center?  Concerned citizens and public servants worked hard to set up this vital government agency.  America should be proud of the job it’s doing, Mitch McConnell and John Boehner … you jerks.

A busy morning.  Walked the dog, rode the bicycle, bathed the dog.  If only Schatzi could ride a little doggie bike I could have spent the entire morning with her!  She’s recovering from her soapy ordeal underneath a nice warm halogen lamp on the computer desk as I write.  Chewie the cat is recovering from the ordeal of sharing her house with Schatzi and Polly’s fat cats by shedding hair on (what else?) a black T-shirt (and a red bra)  amidst freshly folded laundry on Donna’s new bedspread.

As always, click the thumbnails to enlarge them, and don’t forget to tell Donna how her lovely new bedspread brings out Chewie’s rattish highlights.

I suppose we all suffer from self-doubt, second thoughts, and occasional bouts of depression.  That may be why reading Franzen or Wallace is such a breathy experience.  I recognize their characters in myself, though I’m a rock of confidence and functionality compared to most of them.

I had to put Infinite Jest down in mid-read because one of Wallace’s characters was so convincingly suicidal that, knowing Wallace himself suffered from suicidal depression and had hanged himself, I knew I was reading the real thing and didn’t want to go there.  Franzen’s characters are the real thing too, but they’re not suicidal and that makes all the difference for me.  I love Freedom and (so far) The Corrections, even though both are disturbing reads.

Maybe David Foster Wallace needed a dog.  Hell, we all need dogs.  There are hundreds of homeless dogs in every community.  Get busy and adopt one, hear?