“He stared out at all of them like an actor who’d just forgotten the St. Crispin’s Day speech. ‘Get ready.’”
— James S.A. Corey, Memory’s Legion: The Complete Expanse Story Collection 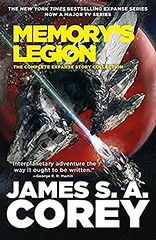 I’m so happy I waited for Daniel Abraham and Ty Franck to consolidate the short stories and novellas they wrote to accompany and flesh out the nine novels of their series, The Expanse, into one volume. I tried to pace my reading but in the end greedily devoured the last three stories (Strange Dogs, Auberon, The Sins of our Fathers) in one setting.

Is it a spoiler to reveal here that within these stories and novellas, fans of the series learn some what-happened-afters with regard to Anna’s daughter Nami, Marco and Naomi’s son Filip, and life on one new world, Auberon, after the Ring Gates close? If that’s not enough to tempt you, I don’t know what will.

These two writers built an entire universe. I could immerse myself in it forever. The TV series, truncated and incomplete as it is, is endlessly fascinating and I know I’ll watch it through again and again, but the books (and this collection of stories)? Even more so.

“Being her friend was like going to a tropical island for a little fun in the sun, only to be kidnapped by terrorists.”
— Lauren Beukes, The Shining Girls 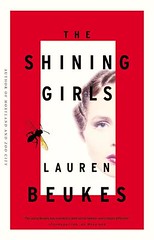 The Shining Girls
by Lauren Beukes

I’m a Lauren Beukes fan, so when I realized Apple TV’s Shining Girls series was based on one of her books, I decided to read it, assuming it would be a richer, more detailed, and possibly quite different version of the story I’d seen on TV.

Right on all three counts. It’s not that often I come to a book after watching a TV series or movie based on it … as with most of us, I think, it’s usually the other way around … but I always find the experience enriching. So you’re watching His Dark Materials on HBO? You say the series blows your mind? Wait’ll you read the books, brothers and sisters!

No details, no spoilers, but the story Lauren Beukes tells in “The Shining Girls” is fascinating, and she has great characters in the persons of Kirby and Dan. Harper, from the first time we see him to the last, exudes evil, a monster in human form, described almost entirely by the things he does, not with florid prose. Really great writing here, first page to last.

With this book I’ve added a new box to my category/genre list: supernatural. “The Shining Girls” to my mind is in no way science fiction (there is zero science behind the time-traveling house), nor is it fantasy (nary an elf in sight). It is, simply, supernatural, and the horror is in the eye of the reader.

“I’ll never be like you. I wasn’t made like you.”
— Silvia Moreno-Garcia, The Daughter of Doctor Moreau 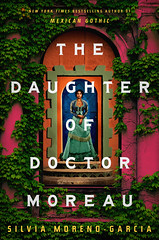 The Daughter of Doctor Moreau
by Silvia Moreno-Garcia

If I hadn’t selected Silvia Moreno-Garcia’s “Mexican Gothic” for last year’s October book club meeting, I’d have chosen “The Daughter of Doctor Moreau” for this year’s.

Book club aside, when I heard about “The Daughter of Doctor Moreau,” I couldn’t resist reading it on my own, so impressed was I with “Mexican Gothic.” Now that I’ve read it, I’ve recommended it to the other members. I know some at least will want to read it.

Short comments, as usual, with books I really like but have difficulty writing about:

Just the right amount of romance and creepiness, with a bit of science fiction to justify the creation of the hybrids. I like the way Moreno-Garcia slowly and gradually fills the reader in on the appearance and behavior of the doctor’s creations. The fascinating setting of the hacenado of Yaxaktun (thank goodness for online pronouncing dictionaries). The big reveal about Carlota, telegraphed almost from page one, still giving the reader a sense of surprise and wonder when finally delivered. The lessons in Mexican history, immigration, and rebellions. The poisons of racism and colorism between pure Europeans, Indians, Mestizos, Mayans, Black Mexicans. The absence of tee-heeing around Carlota’s sexual maturation. The way Montgomery grows on the reader, despite his essential shittiness (which autocorrect wants to change to shiftiness, which I like). Ramona, full of surprises. The Lizaldes, the whole lot of them (whom autocorrect wants to call the Lizards, also apt).

Couldn’t put it down.

“Perly stood as if frozen in place, watching the turmoil beneath him spread. ‘Just remember this,’ he said in a deep voice that cut neatly through the confusion. ‘Whatever I’ve done, you’ve let me do.'”
— Joan Samson, The Auctioneer 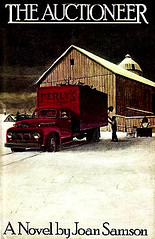 The Auctioneer
by Joan Samson

Since my birthday falls on Halloween, I traditionally host our October book club meeting. As host, I get to select the genre, and I choose horror. For October 2022 our selection was “The Auctioneer.”

A quick summing up: The devil comes to Harlowe. Elmer Gantry leaves.

Gotta say, I couldn’t stop reading, even as I rolled my eyes in disbelief over the Moore’s inability to say “no” to Perly Dunsmore and his band of deputized thugs as they systematically reduce them to penniless slaves. But then I thought of cults, past and present, and persuaded myself such things are at least possible, and anyway it’s fiction that has something truthful to say about the human condition, at least metaphorically, and that was all the excuse I needed to keep turning pages.

I couldn’t help thinking of Shirley Jackson’s “The Lottery” as I read, and wondering if Joan Samson could have made a more effective short story out of this, but in the end realized “The Auctioneer” is as long as it needs to be. The horror is the slow, steady dripping away of the villagers’ wills and independence in the face of Perly Dunsmore’s strange power.

And Perly’s dog Goldie! Familiar, much?

“It was as if he were driving a new pickup, he thought. He wondered how long it would last.”
— C.J. Box, Shadows Reel (Joe Pickett #22) 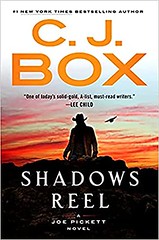 I’m reading C.J. Box’s Joe Pickett novels, set in a mountainous, sparsely-populated corner of Wyoming and featuring a game warden who finds himself and his family threatened by bad men intent on raping the West. They’re great reads, engrossing and impossible to put down, and I’m devouring the series.

It can be a struggle to write insightful, fresh reviews of individual novels in a series. I’ll start by repeating what I said about “Open Season,” the first Joe Pickett novel:

I really like this Pickett guy. He makes mistakes, and plenty of them. He worries about money. He trusts people he shouldn’t. He’s a regular Joe. I really like the depictions of Wyoming, a state I lived in as a teenager and remember fondly.

I will add that he’s notoriously hard on Wyoming Game and Fish Department pickup trucks.

In “Shadows Reel,” we finally witness the battle between good Nate and evil Nate ( Joe’s two-sided sidekick), so frustratingly teased in the twenty-first, incomplete-feeling novel “Dark Sky.” Joe is present at the battle, wielding a shotgun in a vacant lot in downtown Portland, Oregon, called in at the last minute by a wounded Nate (one can only marvel how easily Joe’s able to catch a flight from Saddlestring, Wyoming and arrive in the nick of time to save Nate’s ass). As to Joe and Marybeth’s separate adventure in back home in Saddlestring, that part of the story is another doozy, entirely satisfying.

I was struck by Box’s injection of Antifa and Black Lives Matter street fighting into Nate’s sections of the story. Initially it feels as if C.J. Box is following a frighten-the-old-white-folks Fox News script, but at the same time Nate’s naturally sympathetic to any kind of anti-government/anti-police sentiment, and in the end he has a new friend, a BLM activist who will doubtless play a role in future novels.

Did anyone else assume that when April tells Marybeth about her prospective job working for a private investigator, she’s talking about going to work for Cassie Dewell in Helena, Montana?

“Something that found you, undid you, rewired you, and so much more, before you ever had the know-how, let alone the nomenclature, to understand. For all of my adult life, and the majority of my kid life, too, that thing was a show I bet you’re familiar with called Buffy the Vampire Slayer.”
– Evan Ross Katz, Into Every Generation a Slayer Is Born: How Buffy Staked Our Hearts 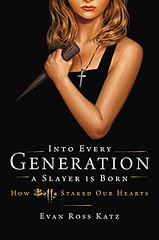 Into Every Generation a Slayer Is Born: How Buffy Staked Our Hearts
by Evan Ross Katz

75-year-old white cis male here. First watched Buffy five years ago when Netflix had it; got halfway through before they dropped it. Borrowed a box DVD set from a friend to finish watching. Begged my wife for a box set of my own so I could watch it again. Now on my 4th or 5th re-watch. (p.s. It’s on Hulu now if you don’t have a box set of your own.)

I read Evan Ross Katz’s book in a flaming Buffy stan frame of mind, totally into his paean to the best series ever to appear on TV. I began to bog down in some of the lengthy cast interviews (not SMG’s to be sure, but some others) when I realized they were beating around the bush. I bogged down even more in the second half, which in part focuses on the issues surrounding Joss Whedon and his treatment of cast members and writers, mainly because the interviewees were being vague and careful not to say anything that might be actionable.

I’ll admit to something other Goodreads reviewers won’t: I want to know which actors Joss hooked up with. I suspect you do too. You’ll not find answers in this book, or even informed speculation (for that there’s a subreddit: r/buffy). Instead, I found page after page of deflection. None of this is Katz’s fault, I hasten to say. Nor is the refusal of certain cast members to talk to him at all, on or off the record (I’m particularly disappointed in you, Alyson). I can only hope I live long enough to hear the full story, when actors younger than me decide to speak honestly.

I wanted to know what Katz, cast members, writers, and fans think about one episode in particular, Normal Again (s6/e17). In this I was also disappointed. While the episode is mentioned in an early chapter, there’s no discussion of its implications. And if you know the episode I’m talking about, you know why it’s important.

What I most enjoyed are the lengthy interviews with Sarah Michelle Gellar, who comes across as a terrific person and actor. I’m ready to finish my current rewatch, then without a break put on Welcome to the Hellmouth (s1/e1) again. Thank you, Evan Ross Katz!