You Can’t Read That! Banned Book Review: Out of Darkness 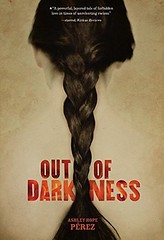 Ashley Hope Pérez’s novel Out of Darkness, published in 2015, is a Romeo and Juliet story set against the backdrop of an actual historical event: the New London, Texas, school explosion of 1937, which killed more than 300 students and teachers. The doomed teenaged lovers are Naomi, a Mexican girl, and Wash, a Black boy. Both are subject to the racism, prejudices, and rigid segregation of the era.

The novel has amassed an impressive list of awards and become popular with young adult readers: it’s frequently studied in advanced placement English classes and is a staple of high school and middle school libraries. In 2021, religious conservatives began to challenge the book at school board meetings. Over the past two years several schools have banned or restricted access to the novel, sometimes summarily withdrawing it from classrooms and libraries without following established review procedures. Out of Darkness suddenly shot to fourth place on the American Library Association’s list of most-banned and challenged books in 2021, and has likely earned a permanent place on that organization’s “top ten” list.

The 2021 incident that kicked off the current wave of challenges and bans is this one, in which an (alleged) parent reads an out-of-context passage from the novel to members of the Lake Travis school board in Austin, Texas:

The lady in the red dress plays it as if the entire novel is about anal sex, but the isolated, out-of-context passage she quotes is a description of racist and sexist trash talk directed against Naomi, the lone Mexican girl in school, by a group of gossipy, dirty-minded classmates. It illustrates the attitudes and prejudices Mexican girls of the period had to endure and navigate around. The woman reading the passage is in the classic curse-word-counter mold: the sort who triumphantly slaps down an itemized list of “God damns” and demands a book be banned because the author takes the Lord’s name in vain thirteen-and-a-half times. Never mind that the woman protested a book she’d obviously never read, the Lake Travis school board caved, bypassing its own challenged book review process and pulling the novel from school district libraries.

Subsequent challenges to Out of Darkness have followed a similar pattern: after objections to the same passage so hilariously quoted to the Lake Travis school board, and also to descriptions of Naomi and Wash beginning to explore their sexuality and attraction to one another, a staple of teen fiction, other school districts around the country pulled the novel from libraries and classrooms. In some cases, upon review, Out of Darkness has been placed back on library shelves; in others, bans remain in effect. The “controversy” over Out of Darkness is a manufactured one, and I doubt it’ll go away anytime soon.

One suspects (okay, *I* suspect) the real reason right-wing activists don’t want your children to read Out of Darkness is racist discomfort, misleadingly (and mistakenly) labeled CRT or critical race theory, an imagined conspiracy of leftist writers and academics to make white people feel bad about the way they treat Blacks and other minorities. It’s undeniably true that Naomi and Wash, the star-crossed lovers of Out of Darkness, are treated with sympathy and respect while the white adults and classmates who oppress them are unflatteringly shown as nasty, semiliterate racists.

That the sexual awakenings and adventures of white teens, the primary subject of many if not most young adult novels, rarely raise the hackles of conservative parents, is telling in comparison with their reaction to this and other young adult novels dealing with Black and minority sexuality, particularly those that also depict racism in American society.

Yes, Out of Darkness addresses teenage sexuality, often in frank and gritty detail. While Wash and Naomi never consummate their love, they do explore one another sexually (though to my mind the descriptions are anything but pornographic). What is frank and gritty, downright pornographic, is the hatred of New London whites toward the Blacks and Mexicans who live among them, the incestuous desires and ultimate rape of Naomi by her stepfather, and the attempted lynching of Wash and his family by white oilfield hands in the wake of the school explosion, men looking for someone to blame. It’s a bleak and upsetting read, but perhaps an important one for young people unaware of just how bad things were in the 1930s, echoes of which continue to reverberate today.