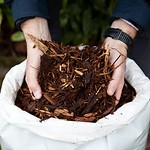 Donna’s walking around with a bandage on her face. Our dermatologist found what might be a basal cell carcinoma just below her nose and cut off a portion to have tested. “Might be” … yeah, right. Every time either of us has had a lump or patch of skin biopsied, it’s come back positive.

The nightly news has always included a three-minute block of feel-good fluff, but what did the networks use to fill those minutes before the internet and viral videos? I honestly can’t remember. It’s hard to get beyond my own wired myopia, but not everyone has access to the internet or even chain email, never mind YouTube and TikTok, so those recycled video clips they show on the news every night are being seen by a whole lot of people for the very first time. I tell myself that, but still want to scream at the TV for wasting my time with shit my friends and I made fun of on social media the day before.

Here’s a short video from yesterday’s stroll with the Gang of Three. You’d think they’d never seen another dog before.

When we walk, Fritzi and Lulu bark at anything and everything, including coyotes and javelinas barely visible in the distance. Mister B’s mostly deaf these days, but Lulu and Fritzi make enough racket for him to hear, and then he starts in too. I’ll be taking them out shortly for this morning’s walk, which’ll likely turn into another barkfest. It’s not so bad now … we go later in the morning and I don’t worry so much about disturbing the neighbors … but soon it’ll be hot again and we’ll have to walk at the crack of dawn, before the asphalt on the street starts to bubble.

I have nothing insightful to say about the Russian invasion of Ukraine, other than the common observation that Putin’s digging in and not likely to stop, no matter the level of immiseration inflicted on Ukrainians and Russians. Putin has the numbers. I, too, have wondered why his air forces didn’t immediately establish air superiority over Ukraine, wiping out its aircraft, airfields, and surface-to-air defenses, but expect that process to begin soon.

Although Russia has the numbers to overwhelm Ukrainian defenses, it isn’t demonstrating much of an ability to support and resupply its invasion force. Maybe what I learned in staff college in the 1980s is still true, that we have the only military capable of sustained operations far from home. Logistics is everything.

As to stories of poor discipline in the Russian ranks, and little old Ukrainian ladies single-handedly wiping out columns of tanks, there isn’t a pole long enough. Everyone has an agenda to push, and propaganda is flowing freely.

The Lakenheath-based F-15C squadron temporarily deployed to Poland has returned to the UK and will be deactivated this month, but a number of F-15E Strike Eagles, which can fly both air-to-ground and air-to-air missions, are still there, and apparently we’ve moved some F-35s forward as well. Not that I expect us to start policing the skies over Ukraine … we’d be pulled into a major European war tout suite. Any notion that we could stand off outside Ukrainian airspace and launch smart weapons against that 40-mile-long Russian convoy inching its way toward Kviv is fantasy. Like the Russians wouldn’t immediately figure out where those weapons came from?

There’s nothing good about any of this, and it’s impossible to see any kind of positive outcome.