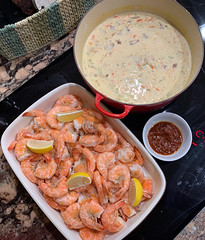 The lull between Christmas and New Year’s Day is traditionally the time for domestic bliss and best-of-year blog posts. Leastways, here at Paul’s Thing. Or is it?

Last year: I put up two photo posts (one DB, one best-of-year) and a rant about Covid. The year before that: book reviews and DB. 2018: more DB and a rant about uniformed military personnel going MAGA. 2017: one DB post; one about losing friends over Trump. I suppose I could go all the way back to 2004, year one of Paul’s Thing, but that’s enough. Okay: I was right about domestic bliss and less right about best-of-year stuff, and there’s more situational commentary than I remembered.

So, anyway: domestic bliss. I whipped up a pot of Dad’s clam chowder and boiled shrimp in beer seasoned with Old Bay for our Christmas Eve dinner. Polly made a charcuterie platter and our guest Mary Anne brought over a batch of cheese biscuits from Red Lobster. We ate on trays and watched Bruce Willis in “Die Hard.”

We had a quiet bathrobe & slippers kind of Christmas, which is how I described it on Facebook. One of my sisters commented, asking if Donna and I still exchange gifts. Yes, I responded: she gave me a bathrobe and I gave her slippers! We don’t need much, but we each got what we needed … and wanted. Donna made her fantastic eggs Benedict for breakfast, and we both worked on dinner: scallops and spinach over pasta, accompanied by leftover cheese biscuits from the night before. We had a nice Facetime chat with Gregory, Beth, Taylor, and Quentin in Las Vegas, and Polly came over in the evening to share dinner and open her gift from us (more needs/wants: a set of good frying pans). We watched “Don’t Look Up” on Netflix.

About “Don’t Look Up”: the movie (airing on Netflix) is way, way better than you might expect it to be, based on the blurb: “Two low-level astronomers must go on a giant media tour to warn mankind of an approaching comet that will destroy planet Earth.” You read that, you might expect a rehash of “Idiocracy.” Okay, there’s a bit of that, but this time it’s for grownups. And there’s much more. It’s polished and realistic, with an A-ticket cast. It depicts how things play out in the real world, not only our pretend-it’s-not-happening reaction to the stark facts of the climate crisis but the Covid pandemic as well, and some of the best political satire since 2009’s “In the Loop.” It’s what will happen; it’s what is happening.

I haven’t said much about what we’re watching on streaming TV, so let me plug Apple TV’s “For All Mankind.” It’s an alternate universe history of the Apollo-era space race, a what-might-have-been story about how things might have played out had the Soviet Union not only beat us to the Moon but put a woman cosmonaut up there as well (as you might expect, the United States responds in kind). It starts out a bit cringey, with a lot of over-used echoes of “The Right Stuff,” but quickly becomes absorbing. Also on Apple TV: “Dickinson” and “The Morning Show,” both brilliant. Donna’s very much into “Ted Lasso,” but I haven’t been able to get past my aversion to sports in order to watch it, as my friends tell me I should. One show I’m surprised Donna likes as much as I do: Netflix’s “Sex Education.” And we’re both huge fans of “Homeland,” an eight-season series from 2011 that originally aired on commercial TV but is now carried ad-free on Hulu. I could go on and on about “The Expanse” on Amazon Prime, but perhaps I’ll save that for a future post, after the current and final season ends.

The pups say hello. They got rawhide chews and new dinner bowls, and put on their winter warmups for this photo:

We don’t know a lot about Lulu & Fritzi’s background, but judging by the way they and Mister B frisked around as we exchanged and unwrapped gifts, yesterday clearly wasn’t their first rodeo. That tells us their memories of Christmas are good and happy ones, as are ours, and, we hope, yours.