You Can’t Read That! is a periodic post featuring banned book news roundups, rants, and reviews. This post is a review of Adam Rapp’s young adult novel “33 Snowfish,” subject of a recent banning attempt in Virginia. 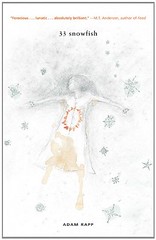 Adam Rapp’s young adult novel “33 Snowfish” came to my attention through a November 2021 news report from Fredericksburg, Virginia, where the county school board had directed its removal from high school libraries, with two members calling for copies to be burned as well as banned. The board’s order came after a religious-right activist parent, admittedly combing through school library shelves for books with LGBTQ themes and characters to complain about, stumbled upon this one, which she added to a new category of books to protest: “bad, evil-related material” with “sexually explicit” content. The school board, in addition to ordering the removal of “33 Snowfish,” directed schools to review all books with sexually explicit content on library shelves, a task librarians claimed would require evaluating thousands of titles.

A little over a week later, after counter-protests by teachers, librarians, students, and parents, the school board reversed its decision and “33 Snowfish,” along with an LGBTQ book that had been removed with it, was returned to library shelves. The order to review all sexually explicit books was also rescinded, and one of the two board members who called for burning the book apologized for his comment (but still wants it banned). The county school district superintendent, who sided with school librarians when the board initially banned “33 Snowfish,” has announced his retirement.

Here’s a synopsis of “33 Snowfish” from Goodreads:

On the run in a stolen car with a kidnapped baby in tow, Custis, Curl, and Boobie are three young people with deeply troubled pasts and bleak futures. As they struggle to find a new life for themselves, it becomes painfully clear that none of them will ever be able to leave the past behind. Yet for one, redemption is waiting in the unlikeliest of places. With the raw language of the street and lyrical, stream-of-consciousness prose, Adam Rapp hurtles the reader into a world of lost children, a world that is not for the faint of heart. Gripping, disturbing, and starkly illuminating, his hypnotic narration captures the voices of two damaged souls — a third speaks only through drawings — to tell a story of alienation, deprivation, and ultimately, the saving power of compassion.

My first impression of “33 Snowfish” was that I’d stumbled upon Cormac McCarthy’s childhood diary, so sad and barren is the story told by 10-year-old street kid Custis. His 14- or 15-year-old companion Curl, a child prostitute and drug addict, narrates a few dreamlike entries, while the older Boobie, a psychopathic arsonist and murderer, adds disturbing sketches, but it is Custis who tells the tale of their individual backgrounds and how they came together, narrates their flight across the winter landscape of the upper Midwest, and describes his eventual rescue by the kindly and charitable Seldom. It is, as the synopsis states, a bleak story with a bit of uplift at the end.

Is it the sort of book young adults might want to, or should, read? That’s not a decision I’d want to make. My childhood was nothing like the childhoods depicted here, but neither was it anything like Holden Caulfield’s, and I treasured “The Catcher in the Rye” when I was in high school. Many young adult readers will recognize and relate to the broken children in “33 Snowfish,” and while they’ll encounter crude language, shocking insights into the lives of sexually exploited children, and death, they’ll find nothing even remotely pornographic.

One thing that strikes me is that the parents and school board members who want “33 Snowfish” banned and burned seem to have skipped over the final chapters, wherein Seldom, a good and Christian man, takes in Custis and gives him the home he never had. They see only evil in this book — clearly because they never bothered to read it.

Here’s to the teachers, librarians, students, and parents of Fredericksburg, Virginia, who saw the value of “33 Snowfish” to high school readers and undid an attempt by the forces of ignorance to ban it.