A Laissez-Faire Approach to Seasonal Tasks

Annual holiday letters from friends and family have begun to arrive, despite warnings of postal delays. We love getting them, and of course that means we have to send one out ourselves. Like most families, one of us writes it using a combination of first-person plural and the third person: we adopted two new dachshunds in August; Paul started writing about banned books again; Donna organized a luncheon for the members of her sewing guild. Single people don’t have to wrestle with point of view, and yes we do have single friends who send annual letters, or at least fill up the blank areas and backs of Christmas cards with updates and best wishes.

I’ve written ours but won’t mail it until after Christmas. We’re spending the holiday with our son and his family in Las Vegas. Since our daughter’s coming along and both grandkids will be there, all three generations of our family will be under one roof. That hardly happens any more, so we’re seizing the opportunity for a Woodford family photo. Once we’re home and have copies of the photo printed, we’ll include them in our annual letter, which is why it’s going to be late. Will I post it to the blog as well? Of course!

Speaking of photos, Donna came out into the back yard just now and snapped this one of me and the pups after our morning walk. 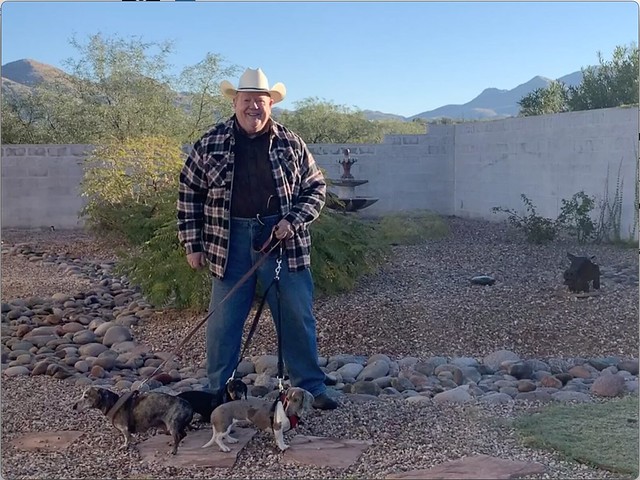 It’s crisp outside but sunny; typical December weather in Tucson. I’m wearing a fleece-lined shirt jacket, an early Christmas present to myself. It gets any crisper, we’ll have to dig out the doggie sweaters. We’re bringing Mr. B with us to Las Vegas but leaving Fritzi and Lulu with a Tucson friend who has dachshunds of her own … we’re not quite ready to trust the new girls on an eight-hour car trip.

The tornado in Kentucky, judging by the photos I’m seeing, looks like it squatted over downtown Mayfield and stayed there a while, which is strange and unsettling behavior. The tornado-caused collapse of an Amazon warehouse in Illinois is disturbing as well. My daughter works in just such a facility in Tucson, which from the outside looks like a solid structure but, I now realize, must actually be flimsy. We hear over and over how things like tornados and hurricanes will intensify with climate change, and now we’re beginning to experience it first hand. One good thing, though … they’re getting ready for a major storm in Northern California, with lots of rain and up to ten feet of snow in the Sierras.

I’m starting to work on end-of-year homeowners’ association stuff: organizing the annual general meeting, mostly, but also looking for a volunteer to replace me next year. Donna finished up her third or fourth year on the board of her sewing guild chapter and is now just a regular member, free to carp and complain as regular members are wont to do, and I envy her new-found freedom! God knows, there’s plenty of HOA stuff to carp and complain about … mostly due to my laissez-faire approach to management, about which I’m sure to get an earful at the AGM!