We’ve been living in an inverse Hitchcock movie. Several weeks ago the birds who visit the feeders in our yard vanished. They haven’t come back. The most likely reason, we’ve been thinking, is the presence of a predator. We don’t have a cat and neither do our neighbors. Turns out it’s another bird. 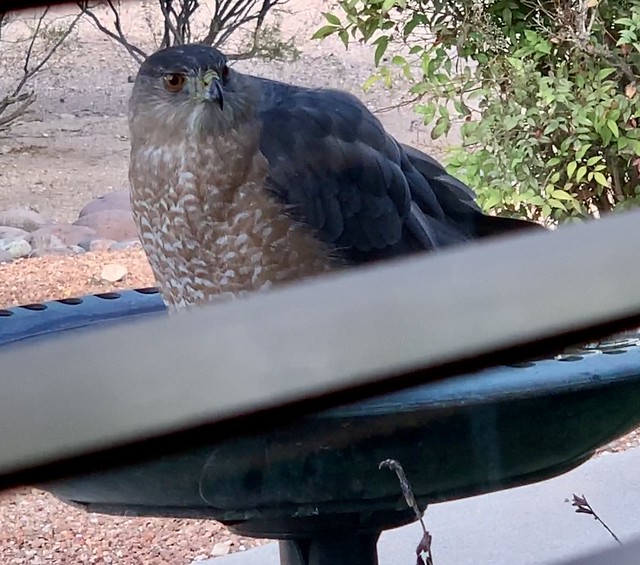 Sitting in my reading chair yesterday, I sensed a presence on the other side of the window at my left shoulder. I turned my head and there she was, not four feet away. Luckily my iPhone was within reach. Moving slowly and carefully so as not to startle her, I snapped a photo through the blinds. I’m pretty sure she was looking at me as intently as I was looking at her. Fritzi, Lulu, and Mister B were in the room with me and saw her too, but they didn’t bark. After a few minutes, she flew away. An hour later, I saw her perching in the palo verde outside the front door.

She’s a Cooper’s Hawk. She preys on, and eats, smaller birds. We know her because she’s visited us many times. In the past she’d drop by for a tasty snack, then move on to another yard with bird feeders, our place but one of many stops on her circuit. Now, though, it looks like she’s taken up permanent residence somewhere on our property. The bird feeders we last filled two months ago are still full, which tells us how long she’s been here.

To encourage her to move on and start visiting other neighbor’s yards again, I took in the bird feeders. I’ll empty the bird bath today. Sooner or later, we hope, she’ll fly off for greener pastures and we can put the feeders back out and refill the bird bath.

A bird of prey took a hunk out of one of our dachshunds a couple of years ago. We didn’t see it happen, but the talon-shaped wound on poor Maxie’s butt told the story. Could this hawk have been the culprit? Maybe, and that’s one more reason to encourage her to move along.

It’s both concerning and cool that the hawk has become comfortable enough around us to let herself be seen. I feel bad about trying to chase her away, but know that even if I succeed, she’ll be back.