This tweet, and the thread that followed, prompted a lot of people to say what they really think of pickup trucks and the assholes who drive them:

What started as a standard Twitter Two-Minute Hate was on the verge of becoming a mass movement, with riots and looting. Pickup trucks and their asshole owners were saved from acts of vandalism and public lynchings at the last minute when a celebrity couple confessed they bathe only rarely. I’m thankful for my narrow escape.

Let me just say this:

If you’re of the big & tall tribe, especially if you’re both, and you’re looking for a vehicle with a wide door that’s level with you and not down by your knees or ankles, a vehicle you can get in and out of easily and with your dignity intact, a vehicle within which your belly does not touch the steering wheel nor your head the roof, well then you might just be looking for a full-sized pickup truck. Sure, I occasionally haul stuff in the bed and have been known to tow a trailer, but when it comes down to it I drive a pickup because I’m big, damnit, and you’ll pry my truck from my cold dead fat hands.

Here’s our great-goddaughter Giorgianna playing with Fritzi and Lulu in the back yard.

Living with three dachshunds is going to be an adventure. We have our eye on Lulu, the black & tan, who seems to be gunning for the role of alpha dog. She’s a smart one, for certain, and Mister B is already deferring to her on many things … but not all. Who gets the bed on the floor by my desk, for one. This morning Mr. B and Lulu had a quiet fight over it. Eventually I looked down and saw this: 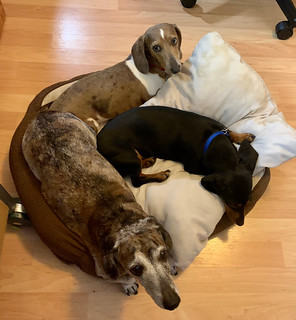 A historic compromise, but judging by the expression on Mr. B’s face, a short-lived one.

Even though fully vaccinated, I started masking up again over the weekend, at least to go into stores. Now the CDC is recommending all the rest of you fully vaccinated folks do the same. Okay, they aren’t saying “all,” just those of you who, like me, live in areas of the U.S. where the risk of COVID-19 transmission is high or substantial. Which is about two-thirds of the country at present and growing, thanks to the Delta variant and the stupids intent on dragging us all down. I wonder what surprises the Echo and Foxtrot variants will spring on us.

Before we go one word further, the son referred to in the headline is a teenager. Fourteen years old!

Police say the teenager had been “manipulating a loaded firearm” in the backseat of their vehicle as Pyatt was driving home from a grocery run. The firearm discharged, and a single round hit his sister in the right upper leg.

The teen told his mother the gun went off, but police say she kept driving home and she claimed she did not know her daughter had been shot. Once at home, the teenager got out of the car with the toddler, and set about throwing the firearm and other evidence in the trash while his mother unloaded groceries, according to police. Investigators say Pyatt did not try to remove the gun from the son, did not check her children for injuries, and did not report the shooting to police.

Eventually, the teen told his mother his sister had been shot, and Pyatt then took the child to Community Hospital of San Bernardino, where hospital officials called police. The girl was later taken to Loma Linda University Medical Center to be treated for the non-life threatening injury.

Pyatt was arrested on suspicion of child abuse, and is being held on $100,000 and is scheduled to appear in court Thursday. Her son was booked into a San Bernardino County Juvenile detention center.

You’re telling me a 14-year-old doesn’t know better than to mess around with a loaded gun? Bullshit. He may not have intended to shoot his baby sister, but he pulled the trigger knowing damn well the gun would go off.

And look at the language of the article. You’d think they were writing about a cop shooting someone, with all that passive voice. “Accidental shooting hits baby sister.” “The firearm discharged.” “The gun went off.”

No. That fucking kid shot his baby sister. He pulled the trigger; the gun didn’t go off by itself.

And it gets worse. His mom keeps driving after a pistol goes BANG! right behind her in the car. Did she even flinch? The kid says nothing and tries to hide the gun (and “other evidence” … like what?) when they get home. He doesn’t tell his mom he shot his sister. The mom doesn’t even check on her daughter, who must have been screaming, crying, and bleeding up a storm. The boy finally gets around to mentioning he put a bullet in his sister’s leg, but not until later, after mom has unloaded the groceries.

What the fuck is going on here? Dry run for the next season of Fargo?

Shame on me for being small, but who do you think that mother voted for? And what do you want to bet she’s “done the research” and decided neither she nor her son will get vaccinated?

God, enough with the evil and the stupidity already!

One thought on “Pickup Hicks”