Smoke ‘Em if You Got ‘Em 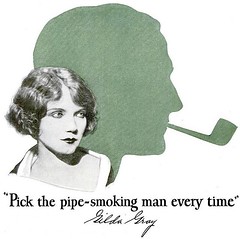 This bit of early 20th century tobacco industry propaganda caught my eye. As advertising art goes, I think it’s inspired. Classy, too, if you don’t think too hard about the product it’s flogging. I’ve been aching to share it with you but first had to think of a thematic way to work it into a blog post. Since tobacco and I have a history, there’s my excuse.

I grew up with a pipe-smoking man, my father, who always looked so dignified with a briar in his hand. People my age also grew up with tobacco advertising, which was pervasive in newspapers, magazines, and on radio and television well into the 1970s. Ads for cigarettes predominated, but ads for pipes and pipe tobacco were right behind. 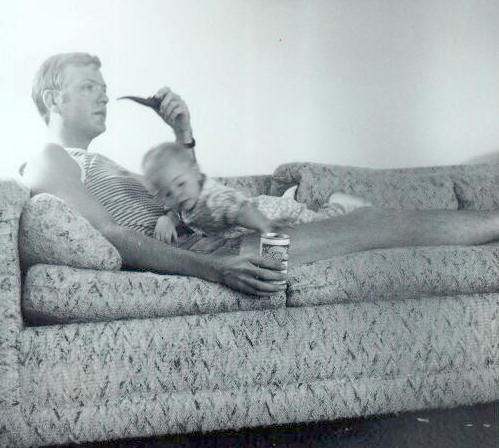 My junior high school friends and I started smoking cigarettes in Laramie, Wyoming, when I was 14. I quit a year later when we moved to Sacramento, California, but started again at 16. I began smoking a pipe at 19, early in my marriage to Donna, and used both cigarettes and pipes right up to the age of 32, when Donna had had enough and made me enroll in a Schick Center aversion therapy smoking cessation program.

That was during the summer of l978, when I was learning to fly the F-15 at Luke AFB in Phoenix, Arizona. I’d fly during the day and alternate nights studying at home and getting electric shocks in a smoke-filled cubicle in a nearby strip mall. I’ll always equate those two things—checking out in the Eagle and breaking the smoking habit—with the labors of Hercules, the hardest and most demanding feats I’ve ever accomplished. 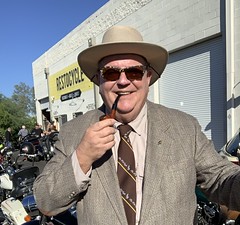 All total, I smoked for 17 of my 74 years. I pray I quit in time … and time will tell. I wish, though, we hadn’t thrown out my collection of pipes, pipe racks, tobacco humidors, and ash trays. They might be worth something on eBay today. Two years ago I went looking for an old pipe to bring to the annual Distinguished Gentleman’s Ride, a motorcycle charity event, but there was nothing to find and I had to buy a cheap one at a vape shop on my way to the ride. I’ll never smoke it, but will keep it for future DGRs (if the COVID pandemic ever lets up and they starting having group rides again).

Speaking of the pandemic, I masked up going into Ace Hardware and Lowe’s this morning, and was the only person in either store wearing one. How suddenly we’ve gone from near-universal masking to bare faces, vaccinated and not (and I assume half the bare faces I see in stores are not). People are starting to mask up again in California, where we were last week, but so far not here in southern Arizona. I’m not aware of the Delta variant making inroads in Tucson or Phoenix, but if it hasn’t it won’t be long before it is.

My purpose in visiting Ace and Lowes was to buy a pet door. When the plastic flap in the one we have started cracking a couple of years ago, we jerry-rigged a fix and inadvertently made it so we can’t just install a new plastic flap now that the old one is cracking again. We need a complete new unit, frame and all. Ace didn’t have the right size but Lowes did. Except that when we opened the box at home we discovered some asshole had raided the box and taken the plastic flap part, so now I have to grab my mask and go back to Lowes.

I was going to grumble some more about the injustice of that, but our son in Las Vegas just messaged us about having the replace the air conditioner and furnace in his house, so I don’t have a leg to grumble on.

The smoking lamp is lit. Enjoy your weekend!