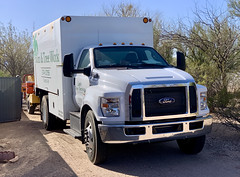 It was worth it, hiring a professional tree removing service, even if the original estimate went up after they took another look at the job to be done. A three-man crew showed up yesterday at seven in the morning with two trucks, an industrial wood chipper, and a trailer for the sweepings. They were done by noon, including clearing most of the branches, twigs, and mesquite thorns that fell into the fenced back yard and pool.

Yikes, though … that is one naked skyline. Might as well be living in Montana! The birds who called those trees home, in spite of the two- and three-inch thorns covering every branch, had to relocate. I was sorry to be the bad guy, but the trees, dead these past three years, had to go before they fell over on their own, possibly damaging the cinderblock fence.

Of course, when it comes to mesquite thorns, you never find all of them, and it’ll be a labor of weeks for me, being careful where I step, to pick the ones they missed out of the rocks with my old-man grabber stick. Yesterday I cleared leftover thorns from the grass by the barbecue island. That small patch alone took half an hour, and I found some I’d missed when I went back over it today. The rocks along the cinderblock fence will take much longer. I’m not going behind the fence to survey the back side until I find a pair of boots with thorn-proof soles, if there is such a thing.

The other side of the fence is a strip of land about as deep as the fenced part of the back yard and a bit wider, covered in brush, cactus, and smaller mesquites; beyond that strip is the highway to Mount Lemmon. The oleanders behind the fence serve as a sound barrier for traffic noise on the highway. They don’t block all of it, but I hate to think how loud it’d be without them. 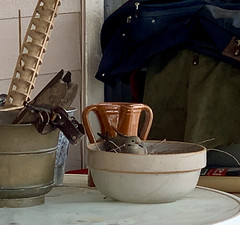 Some of our birds knew eviction notices were coming. The day before the tree removal crew came, I surprised a pair of pigeons on the patio when I ventured out on dog poop patrol. They were starting a nest in an old flowerpot on a table under the patio roof. Today, one of them, I guess the mom, is sitting on a single egg, and seems to be getting used to me coming out back.

Today’s home improvement project is mounting a curtain rod over the guest bedroom window. Donna finished the curtains a couple of days ago and can’t wait to see how they look. Polly promised to do the job, and indeed the guest bedroom’s been her project up to now. She did the hard work of repainting it, but she’s busy with work and it’s not like I have a lot to do around here.

Is it just me, or does anyone else wish they’d made the COVID-19 vaccination card credit card-sized so we could carry it in our wallets? I have a feeling we’re going to be carrying those cards for some time to come, just in case we have to show them to get into Disneyland or whatever. It wasn’t that long ago authorities were suggesting we carry birth certificates around with us. Remember the first wave of voter suppression, oops, ID laws, when you had to show yours to prove your citizenship, and overzealous poll workers wanted to see the notarized original with the embossed stamp? I always wondered how the hell that was supposed to work, carrying a flimsy piece of paper around with you, one that states charge hefty fees to replace when you lose or damage it, and then take their sweet time about doing it?

I’ve said it before and I’ll say it again: it’s time for universal ID. A credit card-sized piece of plastic with a photo and ID info, with an updatable RFID strip or embedded chip containing citizenship/voter registration/passport/driver license/shot records/blood type & donor status/home of record/all that shit. It’d be easy to do. And it’ll never happen, because deplorables and the conspiratorial nonsense they believe (or say they do just to be assholes).

Getting tired of always having to defer to the lowest common denominator types, but that’s the law of averages, innit? They drag the rest of us down and keep us from having nice things.

One thought on “Naked Came the Sky”