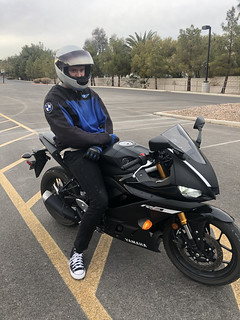 That’s our grandson Quentin in Las Vegas, practicing clutch, shifting, and brake work on a rental bike in preparation for a motorcycle safety course and a motorcycle endorsement on his drivers license. His dad Gregory, our son, is teaching him the basics, just as I taught Gregory years ago (and, more recently, our daughter Polly). Going back a generation, my dad taught me to ride his Harley in Wyoming when I was 14, then bought me a little Honda when I was 18 and starting college in California.

Dad quit riding after we left Wyoming, and the only reason he gave me the Honda later was to save money … I’d been driving the family cars up to that point and running up big bills on Dad’s Shell credit card. Unlike Dad, I never gave up motorcycles, and from time to time he’d rue ever teaching me to ride. He especially regretted the Honda, which put me on a two-wheel track straight to hell. Of course I worried about Gregory and Polly riding, and still do. And now I worry about Quentin. I hope Gregory teaches him well, and that Quentin absorbs and never forgets the safety rules he’ll learn in the formal course. But yeah, I’m a little proud too.

We probably rely on muscle memory more than we realize. I was thinking about that this morning as I carried my cup of coffee down the hallway. Donna doesn’t turn the lights on in the morning, and the hallway is a black hole. Why no lights? Donna likes to look out the family room windows and watch the mountains appear as the sky lightens. I have yet to spill a drop of coffee in that hallway, even though I can’t see my hand in front of my face.

It being winter, Mister B likes to wait for full daylight before taking his morning constitutional. We stayed in today until around 8 AM and the thermometer had risen to 48°F, but there was a brisk wind and it felt much colder. He’s a very good dog and he did his business, albeit quickly.

We’re waiting, along with everyone else, for the next shoe to drop in Washington DC. Twitter is buzzing with rumors of a Trump resignation, which would not surprise me. I feel bad about the Air Force folks who got caught up in Trump and QAnon cultism and participated in the Capitol invasion Wednesday, but am not surprised by that either. I was around for the first wave of Air Force Academy evangelicals in the 80s and 90s … I probably wouldn’t last a year in today’s Air Force. 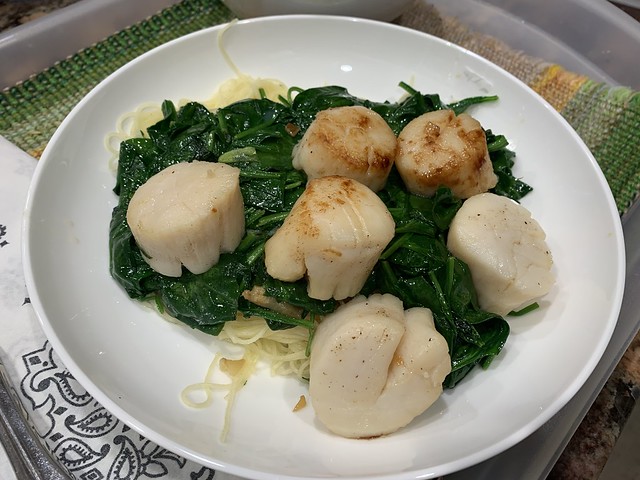 Donna made a terrific dinner last night, which we shared with our bubble friend Mary Anne. She seared scallops in olive oil and garlic, serving them over sautéed spinach on angel hair pasta. Mary Anne brought over some good French bread and a cheesecake, and we watched old episodes of Veronica Mars and Justified.

A quick update on our outside birds: yes, they found the feeders after I moved them. Not sure what this means, but they gobbled up all the seed in one day and now the feeders are empty. Normally, the seed lasts four to five days. Maybe our birdies are worried I’ll move the feeders again and next time they won’t be able to find them. Anyway, I hope they get used to the new location, settle down, and quit eating so frantically.