I used this photo of kilted and butt-painted Proud Boys in a previous blog post about Trump thugs and their racist rampage through Washington DC after Saturday’s “Stop the Steal” rally.

When I saw the photo I thought of similar rowdy scenes at Hash House Harrier circles, and said so on Facebook (many of my friends there are hashers). Reactions varied, to say the least, and I may have offended some friends. Still, hashers are known butt-painters and kilt wearers (though with our Southeast Asian expatriate roots, sarongs predominate). I myself have participated in almost identical shenanigans … though not with racist or murderous intent.

The last time I participated in a hash circle butt-painting, we boys painted the girls’ butts and the girls painted ours. Later we lined up, boy/girl/boy/girl/etc, bent over, lifted our sarongs, and saluted a passing Amtrak train. Our cheeks, if I recall correctly, spelled out “Iguana Hash House Harriers.” I was the “er” in “Harriers.”

I’m willing to bet these Proud Boys feel the same sort of clannish pride in, and affection for, their group we hashers feel toward ours. In both cases, it’s mostly fueled by alcohol, though they’re the mean drunks while we’re generally the happy ones. I wonder if they had thugettes to paint their cheeks or if they did one another, and if the latter was it in a gay way?

Well, as we say in the hash, fuck them.

Will the unrest and alternate reality bullshit stop now the election’s finally over and done with? I don’t know. As I write, on the morning of the day after the Electoral College certified President-elect Biden and Vice President-elect Harris, Trump is still tweeting from Earth 2, witness these from last night and this morning: 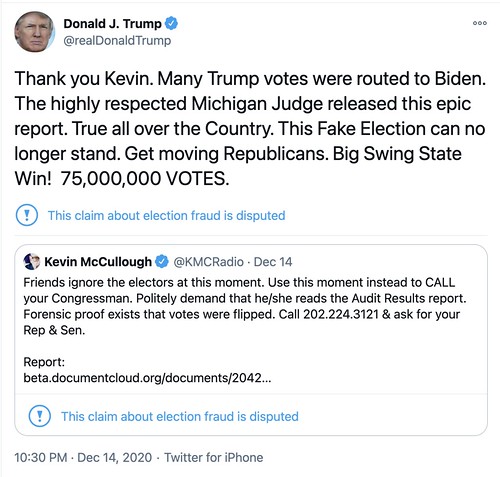 True enough there’s never been an election like this in our country. It’s unbelievable, save for the fact it’s happening right in front of our eyes. Tell you what, I’m not removing the Biden/Harris sticker from my bumper until Trump and his nasty family are out of the White House and Joe and Doctor Jill are in.

As you may have read here, I’m president of my homeowners’ association board. Our latest crisis is garbage pickup. We contract with Waste Management, which has suddenly gone all hard-line about picking up just one big garbage bin and one smaller recycle bin per residence per week, whereas in the past they’d always pick up extra bins when we left them on the curb. I ran WM’s automated voice message obstacle course, eventually getting through to a customer service rep at the Tucson branch. After getting nowhere with her, I asked other board members if anyone knew more. Everyone seemed to recall we had a written agreement with WM saying they’d pick up extra garbage. I found a copy of that agreement, along with the contact number of WM’s HOA account manager in Phoenix, who confirmed we’re grandfathered for two big bins plus the smaller recycle one, and said she’d straighten things out with the Tucson branch.

Right in the middle of that, neighbors started commenting on the patch job the gas company did after digging a hole on one of our streets two days ago: 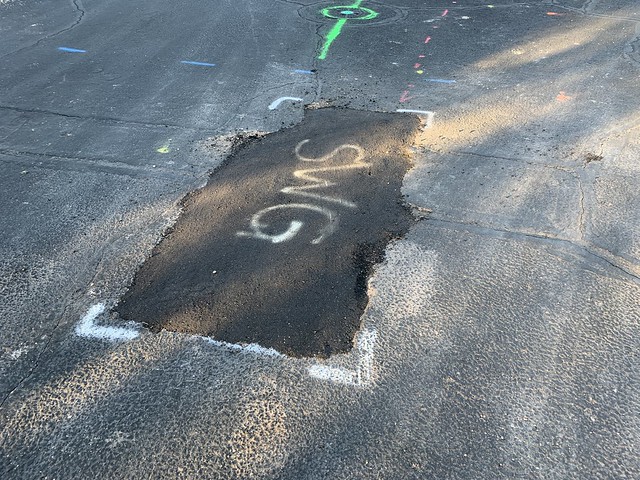 I was working with Waste Management (and for some reason thinking of Tony Soprano) when the patch issue surfaced, so I asked another HOA board member to call Southwest Gas. This patch wouldn’t be a big deal in most neighborhoods, but the edges are crumbling after just two days and it’s clearly not going to hold up to traffic. We pay for our own street surfacing and sealing through individual homeowner assessments, and the difference between our streets and those in surrounding neighborhoods that rely on the county for road maintenance is stark. It’s a battle worth fighting, and fight we shall.