Scroll down for added information and a short video — Paul

When I flew the F-15 Eagle, I occasionally wrote articles for USAF publications. One of my sisters found a stack of material I sent my father years ago, stuff I’d forgotten about. Two of my articles were in the pile. I shared the first one with you several weeks back. This is the second, which deals with the intricacies of air-starting the F-15’s engines with the built-in jet fuel starter, or JFS.

The JFS is a small jet turbine, similar to the APU (auxiliary power unit) on a jet airliner. It allows F-15 pilots to start the main engines without the need to connect to external engine starting equipment. By design, the JFS can be operated on the ground (for normal engine starts) or in the air (for emergency restarts).

The USAF originally ordered the F-15 with the JFS airstart feature disabled. There was a reason for that. When you run the JFS on the ground, you can hear and feel it. That isn’t true in the air, where main engine and ambient noise and vibrations blank it out. Suppose you lost an engine, then ran the JFS to restart it. Not being able to hear or feel it, you might forget to manually turn it off, and the JFS would keep running until it burnt itself out, possibly starting a fire down below the engines.

When the Israelis ordered their F-15s, they insisted the JFS airstart feature remain enabled. American Eagle drivers immediately saw the wisdom in that. Without the JFS, should you lose an engine in flight the only way to get it back was to get it windmilling at sufficient RPM to restart it. That takes speed, which you may not always have. If only, we all thought, you could simply fire up the JFS in flight and use it to motor the engine up to starting speed. The USAF eventually came around.

About two years into my F-15 career all USAF Eagles were rewired to enable JFS airstarts. As an FCF (functional check flight) pilot, it was my job to test it on FCF flights, which are performed after major maintenance to make sure everything’s working right before putting an aircraft back on the daily flying schedule. The FCF profile included shutting the main engines down in flight (one at a time, to be sure), then restarting them with both methods, windmilling and with the JFS.

I don’t know how often Israeli Eagle drivers ever had to use the JFS for airborne engine restarts; I do know it was an exceedingly rare event for us. About the only pilots to ever use the feature are FCF pilots, and there’s generally no more than one of us per squadron. Nevertheless, some line pilot might have to do it some day, and with that thought in mind I wrote this article for a USAF publication called TAC (Tactical Air Command) Attack, widely read in the USAF fighter community. 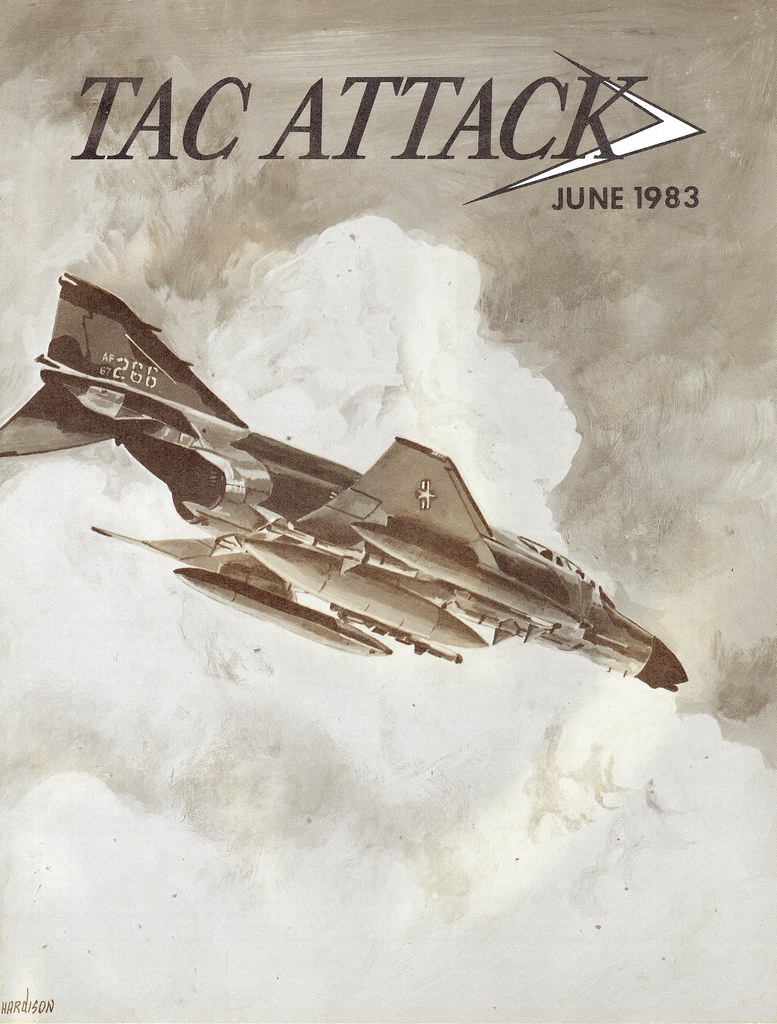 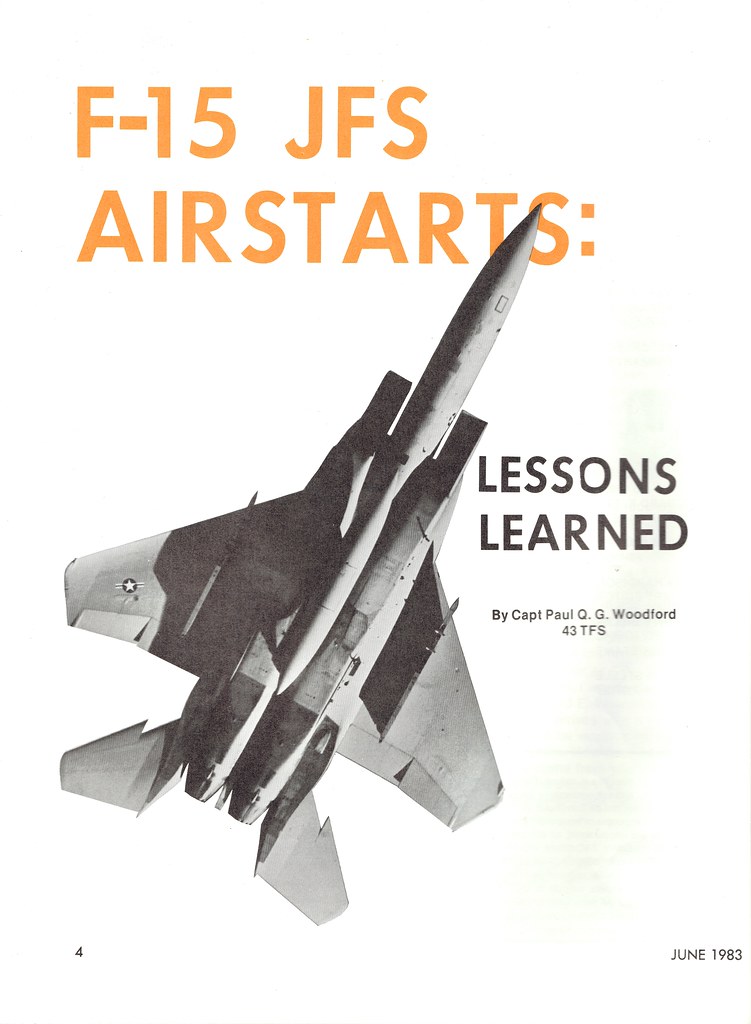 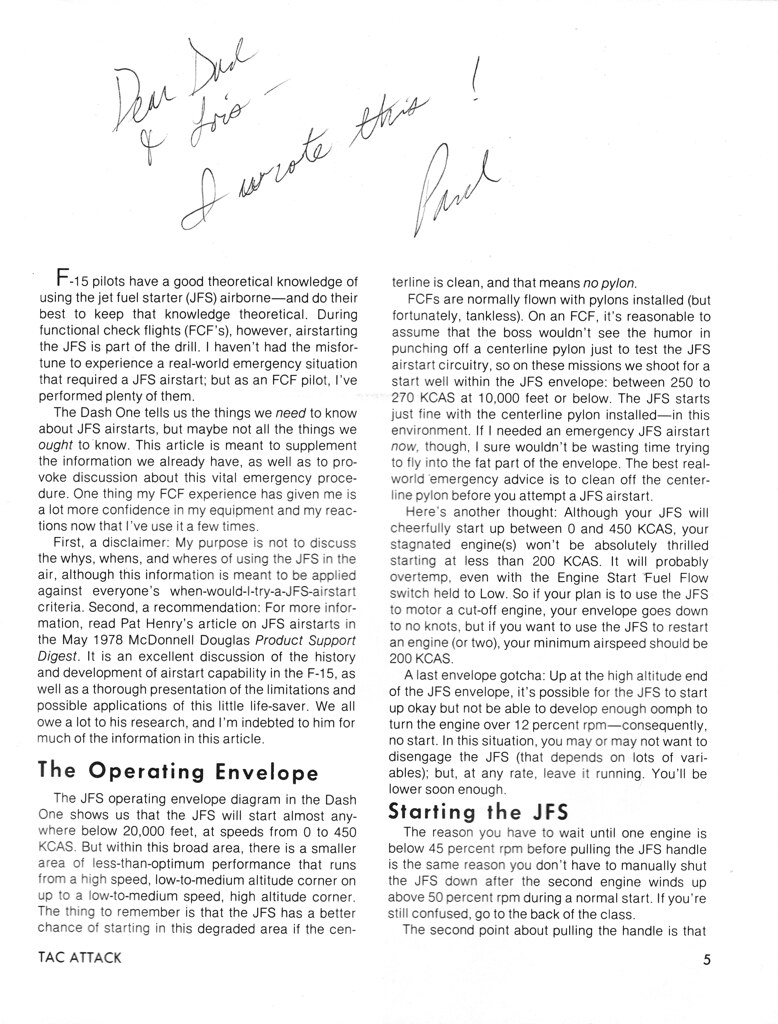 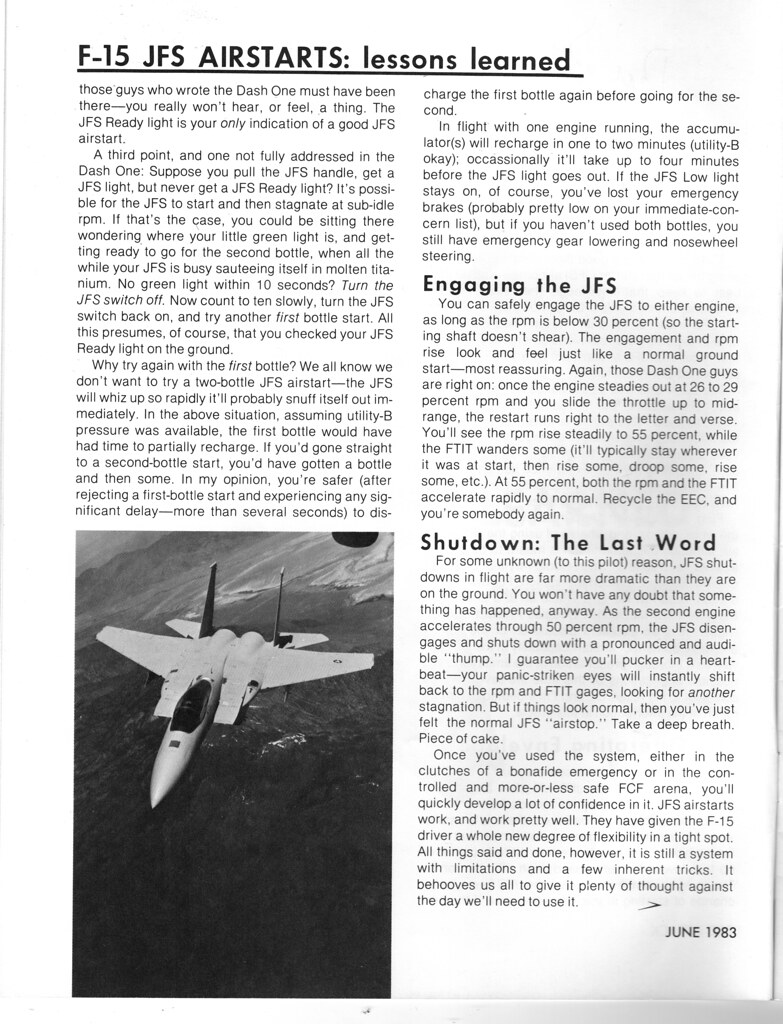 Update: If you’re interested, I’ve added a description of the Eagle’s JFS starting system and a video of it in operation on the ground. It’s from a longer post on different ways of starting aircraft engines I posted a few years ago.

The F-15 Eagle I flew during my USAF career incorporated a self-contained starter system consisting of a small auxiliary power unit called the JFS (jet fuel starter): you pulled a T-handle in the cockpit to discharge a hydraulic accumulator, which started the JFS (itself a small jet engine). Once the JFS was running, it powered a drive shaft to a central gearbox, which in turn transferred power by shafts to start each main engine, one at a time. When both engines reached idle RPM the JFS shut itself down. It wasn’t as fast as a cart start, but no external power was necessary. In this video you can hear the JFS running, each main engine starting in turn, followed by the sound of the JFS spinning down:

You might not think so, but starting the F-15’s engines is just as noisy to the pilot as it is to the ground crew outside, maybe even more so. The JFS is tremendously loud; additionally, when each main engine reaches idle and its inlet ramp slams down it’s a hell of a thump. Whenever I took non-pilot passengers up in a two-seater, I’d tell them there’d be a lot of strange and violent noises during engine start, plus plenty of shaking and alarming bumps, and not to get overly concerned unless they saw me jump out and run away.