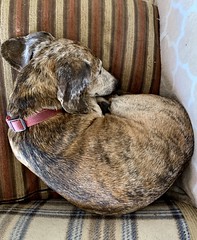 If this blog post seems disjointed and out of focus, here’s why:

Mister B has been to the vet three times in ten days. He’s panting, hacking, feverish, and listless. He’s been tested for valley fever (negative). The vet suspects pneumonia, and he’s on antibiotics. His symptoms, in particular the dry hacking and labored breathing, make me think of coronavirus, which Google says dogs can get (but apparently not spread to humans, which is a good thing because we’ve both been holding and petting him). Monday, if there’s no improvement, we’ll talk to the vet again and discuss whether to take him to an animal hospital.

We’re upset, as you can imagine. Donna canceled a weekend trip with her friend Millie to a ranch north of Phoenix. I bowed out of a group motorcycle run to Bisbee. We knew we’d only be thinking of poor Mister B and bringing everyone else down. As for Mister B, he stays by my side. I’ve taken to sitting in the pool with him to help get his temperature down a little.

Our other pup, Maxie, seems fine. Donna had a sore throat for a few days and what looked like food poisoning one night (although we both ate the same thing and I was fine). Anyway, she’s back to normal and I’ve been okay all along—that is if you discount mutual depression and anxiety over poor Mister B. Please keep our good boy in your thoughts!

Meanwhile, life goes on. We hired a guy to install the new TV in the family room and move the one it replaced back to the bedroom. Last night, for the first time, I watched TV at one end of the house while Donna watched at the other. Still trying to decide if this is a good thing or merely selfish. There are shows we like to watch together and we’re constantly on the lookout for new ones to add to our streaming watchlist. But yeah, if Donna wants drama when I want science fiction, we now have options.

With the TVs, our kitchen remodeling project is almost complete. Oh, I know I said months ago the kitchen was done, and it is, but we always planned a few additional upgrades to accompany it. The one remaining project is replacing the sliding glass patio doors in the living room and master bedroom, but that’s on hold until we assess the long-term impact of Mister B’s medical bills.

By the way, MSNBC was on when I took the first photo of the new family room TV, and Trump was on the screen. I posted that photo on Facebook and Instagram without considering what friends might think. They saw, and commented. Which is why I deleted that photo and replaced it with the one you see above. 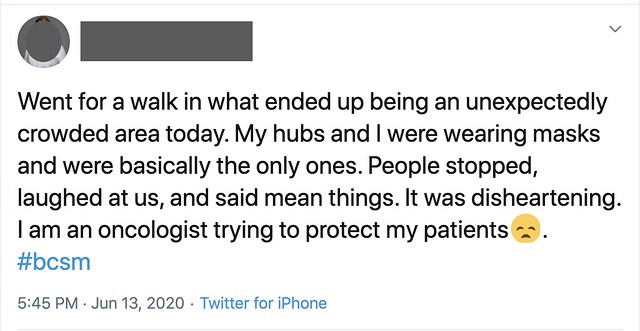 I believe the stories, but haven’t any such encounters myself. I’m a large white man who dresses conservatively and keeps his hair cut short, perhaps a less tempting target for MAGAT assholes.

There are a lot of unmasked people out and about, but as far as I can tell not in significantly greater numbers than in March, April, and May. Keep in mind, though, I’m still sheltering at home, going out only rarely. With the exception of our neighborhood Safeway and Ace Hardware store, the other businesses I visit require masks: Costco, Whole Foods, the exchange and commissary on base, even the Xfinity/Comcast store I visited last week to get a cable box for the bedroom.

Donna gets out way more frequently. She went to a Fry’s grocery store the other day and was the only person in the place wearing a mask. Friends say that’s how it is at Walmart and Sam’s Club, which just goes to show even shopping has become partisan. But no one has given Donna, or anyone we know, grief for wearing a mask. Granted, Tucson’s a college town, a blue enclave in a red state. I wouldn’t be a bit surprised to hear they’re tarring and feathering mask-wearing hippies up in Prescott, but it isn’t happening here.

Social media is also full of first-person accounts of black Americans’ experiences with police and self-appointed white vigilantes (whom I will no longer call “Karens,” settling for the unisex “asshole” instead). With or without cell phone videos as proof, I believe their stories too, am deeply ashamed, and hope I’ll find the courage to intervene if it ever happens to someone in front of me. Beyond that, I can’t say anything useful or insightful because, as noted above, I’m a large white man who dresses conservatively and keeps his hair cut short. Not saying I’m immune to police brutality … none of us are … but it’s not a threat I have to factor in every time I go out (or, like Breonna Taylor, go to bed in my own damn house).

*#bcsm=Breast Cancer Social Media community … I had to track that one down, because BCSM can stand for many other things.