Our friend in isolation Mary Anne came by this morning at seven and we went to nearby Agua Caliente Park for a walk. She was kind enough to take our photo, and even Mister B, no friend of the camera, struck a pose. 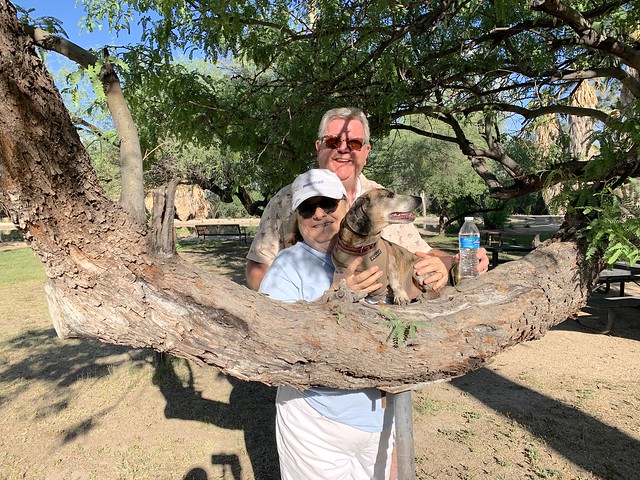 Friends sometimes chide me for not taking the auxiliary dog along on walks, but Maxie, who was an older girl when we got her, had never been leash trained and to this day doesn’t know what to do when we hook her up to one. In any case, she seems to prefer staying home. I occasionally take her, along with Mister B, to the dog run at another nearby park. Please don’t worry about Maxie. She gets lots of love.

My barber, who happens to be one of my motorcycle buddies, closed in mid-March, along with other “non-essential” businesses in Arizona. Our governor says we’re opening back up on Friday next week, so I checked in for an appointment. The shutdown, it turns out, has been devastating for my friend, as I’m certain it has been for hundreds of other small business owners and workers in Tucson. He told me he got some help from a GoFundMe account (which I didn’t know about), but it wasn’t enough and he had to sell his shop to make ends meet. The agreement he has with the new owner, who plans to reopen on the 15th, is that he’ll work for her on Sundays and Mondays; the rest of the week he’ll freelance in his own carport, where he’s set up a barber chair. My appointment is for Monday the 18th, so I’ll see him at the shop. For me, it’ll be as if nothing has changed; for him, everything has.

And isn’t that the story of this whole pandemic? For some survivors, minor inconveniences; for others, major life changes.

I say “survivors,” and realize that’s seriously jumping the gun. It ain’t over till it’s over, and it’s a long way from over. But yeah, if Arizona opens up next week, I’m getting a haircut. If the governor changes his mind and extends the lockdown, it’ll be no biggie for me … but I’ll be putting my haircut money in my friend’s GoFundMe.

Our housecleaner’s on paid furlough (paid by us, anyway … we don’t know about her other clients). Donna’s going to call today to see if she feels safe to start coming back every other week. More gun jumping. But.

But. That’s the operative word for these easing-back-into-normal-life discussions, am I right?

Our next-door neighbor did a most unneighborly thing and hacked up some of the mesquite trees between his house and ours. The tree trunks go into the ground on his side of the property line, so even though the branches he lopped off were on our side, he’s probably in the right, but damn, we wish he’d have discussed it with us first. And the hell of it is, I’m the president of the homeowners’ association board, so if I try to initiate any kind of action it’ll be seen as an abuse of the system … I feel utterly stymied.

Our yard guy was here Monday and told us the trees are so badly butchered it’ll be a miracle if they don’t die. 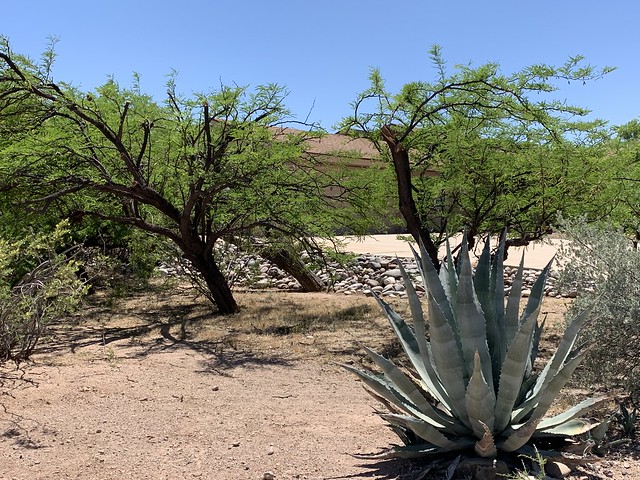 Neighbor guy says he did it to have a better view of the Catalina Mountains, but one of the trees he chainsawed also screened our back yard. His house sits six feet higher than ours; now he and his kids can look down into our back yard and pool area. The tree always gave us some illusion of privacy. Now we have none. I suppose we could become backyard naturists by way of retaliation, but honestly, that’s not us.

Polly Index: all is well with her & Amazon. Her 1,200 TrumpBucks™ came, so we told her it’s time to move out and start living on her own. God, it’ll be nice to have our guest bedroom and bathroom back … and maybe someday, after a deep cleaning (not for the virus but to eliminate all traces of her cats), be able to put up visiting friends again.

I can’t resist bragging about Donna’s chiles rellenos, which she made from scratch for Cinco de Mayo. I helped by roasting the peppers on the grill to make them easier to peel; Donna took it from there and they were magnificent. The only item on the menu she didn’t make by hand was the refried beans. 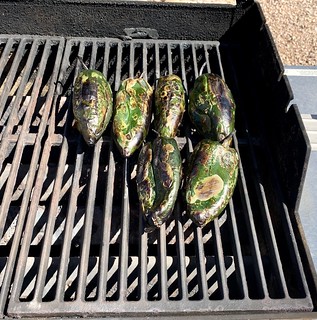 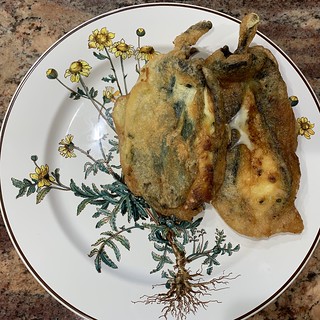 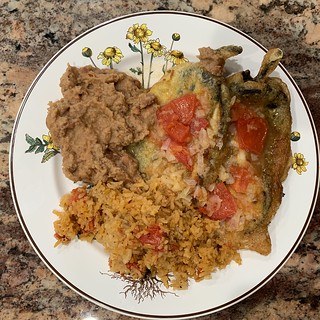