“Not much has been written, and I hope never will be, about agents who devote the best years of their lives to spying for us, take their salaries and bonuses and golden handshakes, and without fuss, without being exposed or defecting, retire to a peaceful life in the country they have loyally betrayed, or some equally benign environment.”
— John le Carré, Agent Running in the Field 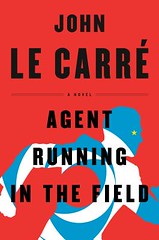 Agent Running in the Field
by John le Carré

From my review of an earlier le Carré novel, “A Delicate Truth”:

You can feel le Carré’s anger with the direction covert intelligence gathering has taken since the days when the Americans, led by Dick Cheney and his puppet George W. Bush, subverted and politicized the process, dragging Britain’s spy services down with them into a Keystone Kop mess of cherry-picking intelligence from favored sources, special rendition, torturing innocent and guilty suspects alike, and achieving nothing but failure after failure. Le Carré’s anger shines with a special intensity when he describes the yes-man atmosphere within Britain’s intelligence services today, and it shines with blinding intensity during the chapter where former foreign office official Kit Probyn tries to alert his former colleagues to a disastrously failed mission he was once part of.

I see echoes of that anger in le Carré’s latest novel. Things have changed since the days of GWB and Cheney, but not overmuch; the yes-men show up in force when they interrogate Nat about his political sympathies, turning blank and unsmiling faces toward him when he describes his opposition to Trump and Brexit.

As in the best of the more recent le Carré novels, his spy protagonist is able to work outside the political constraints of his service to achieve a greater good … at great personal expense, of course.

John le Carré is incredibly good. He has lost none of his power with age. I’m younger than he is, and can still call up and describe my feelings as a middle-aged man at the peak … and just past the peak … of my professional career. Should I survive into my late 80s, will the longer view that comes with age get in the way of my ability to recall those feelings with the same intensity? Age is simply irrelevant with le Carré. When he writes about espionage, he’s back in the life as if he’d never left it. Everything he writes is immediate and believable.

This is a gripping read. Once I reached the mid-point I ignored all further distractions and finished it in one sitting. 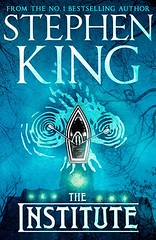 The Institute
by Stephen King

Good Stephen King. Since we all have our own definitions of “good Stephen King,” I’ll spell mine out: engaging characters, suspense, good v. evil, not too long-winded. “The Institute” kept me turning pages, and I finished it before I was ready for it to end.

I’m checking off a lot of categories with “The Institute”: science fiction, thriller/suspense, young adult. I really don’t have much more to say … I enjoyed this novel immensely; it made me remember how it felt to discover Stephen King as a younger reader. 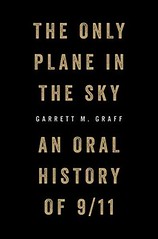 The Only Plane in the Sky: An Oral History of 9/11
by Garrett M. Graff

Exactly what it says it is, a collection of statements and memories from men, women, and children who lived through the terrorist attacks on 9/11/01. Most are actual survivors of the attacks on the World Trade Center and the Pentagon; many more are first responders, direct victims themselves; others … family members, workers and students in nearby facilities, politicians and presidents, responding military members, FAA controllers, were indirectly but nonetheless profoundly affected.

Normally when I review a book I’ve read, I discuss the author’s style, organization, and story-telling ability … his or her writing skills, in other words. I can’t do that here, because Mr. Graff doesn’t write: the words on the pages are those of 9/11 survivors and witnesses. Mr. Graff’s skill shows in the way he organizes and groups the statements and memories, and the overall effect of “The Only Plane in the Sky” is one of tension and high drama. Of course anyone who was alive on 9/11 cannot forget the events of that day, and the book brings those memories back in full force.

“The Only Plane in the Sky” is powerful and moving. 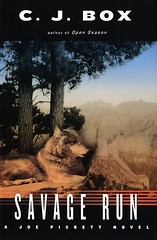 As I’ve learned after reading Patrick O’Brian’s 20 sublime Aubrey/Maturin novels, 24 Jack Reacher novels by Lee Child, and 8 (so far!) Expanse novels by James S.A. Corey, it becomes increasingly difficult to differentiate individual novels featuring the same characters in different settings, and to write fresh, insightful reviews of each one. I’m forced to alter my habit of writing Goodreads reviews for every single thing I read.

I just launched on C.J. Box’s Joe Pickett novels, set in Wyoming and featuring a fish & game warden who finds himself and his family threatened by bad men intent on raping the West. They are great reads, engrossing and impossible to put down, and I know I’m going to devour the series.

So here’s what I’ll do, unless I find I have something urgent to say about individual Joe Pickett novels–I’ll repeat what I said about “Open Season,” the first novel in the series:

As much as I enjoy reading Lee Childs’ Jack Reacher stories, Jack is a superhero, a figure of fantasy. When Jack Reacher gets even, people die … but not before a righteous ass-kicking. While C.J. Box brings on Reacheresque tension and villainy, when it comes to his human and relatable hero Joe Pickett it’s more a matter of luck. Joe prevails, a believable form of getting even. But don’t worry. Asses do get kicked, in satisfying ways. I really like this Pickett guy. He makes mistakes, and plenty of them. He worries about money. He trusts people he shouldn’t. He’s a regular Joe. I really like the depictions of Wyoming, a state I lived in as a teenager and remember fondly. Joe, at least in this first novel, has an almost-too-perfect family, but there are tensions, and I sense troubled teenage years ahead for his daughter Sheridan. Granted that everything in this novel is fiction, it feels real and true. 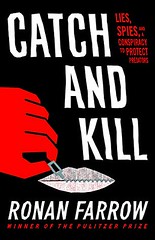 Catch and Kill: Lies, Spies, and a Conspiracy to Protect Predators
by Ronan Farrow

There’s a lot of material here, and a tangle of complex threads: the actual assaults, the threats against the victims, the tabloid industry’s shady practices, two-faced NBC management, the law offices and private investigative agencies employed by wealthy predators, industry insiders spying on victims and Ronan Farrow himself, the conflicts Farrow had reporting this story given his own family background. Farrow does an outstanding job of untangling the threads and arranging the narrative in a way readers can follow and understand … all while exposed to personal and professional risk (which as far as I know continues to be a factor in his life). One has to admire, and it’s a five-star book on that account.

My slightly lower rating is strictly to do with the literary aspects of “Catch and Kill.” The writing in many places could have been clearer. Approaching the climactic event (the publishing of Farrow’s article in The New Yorker), the timeline abruptly changes from a month by month recount to a minute by minute one, but Farrow doesn’t step in to point that out and I didn’t figure it out until the end of the book … a great opportunity for narrative tension missed. Then, there are typos that should have been caught during editing. I may not have noticed those had I listened to the audiobook … and by the way is it right that so many reviewers these days comment on audiobooks they’ve listened to, rather than print books they’ve read? Sorry … two of my inner selves, the Puritan and the English major … are ganging up on me.

Well, whatever. If sleaze is what keeps you turning pages, you won’t be able to put “Catch and Kill” down. My god, people suck.

The book will make you angry, and you won’t trust another mainstream media story you hear or read. What are they not telling us? Who paid them to report this and not that? Never have I so fully appreciated the axiom that freedom of the press belongs to them that own the press. 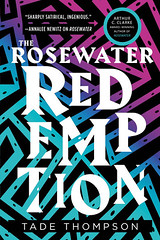 The Rosewater Redemption (The Wormwood Trilogy #3)
by Tade Thompson

I raved over the first book of the Wormwood trilogy (“Rosewater”); the second (“The Rosewater Insurrection”) somewhat less. The final installment of the trilogy successfully wraps things up, though I was a bit underwhelmed with the way humanity finally defeats the Homians, a totally comprehensible attack in line with current cyber technology. I had expected something more fantastical.

Overall, though, I have been delighted with discovering Tade Thompson and Nigerian science fiction. The Rosewater trilogy is fascinating throughout, richly imagined and populated with memorable characters, human and alien.

One thought on “Paul’s Book Reviews”