“A drinking club with a motorcycle problem”: motto of the Boozefighters Motorcycle Club, est. 1946, the original “wild ones” immortalized in the Marlon Brando movie. 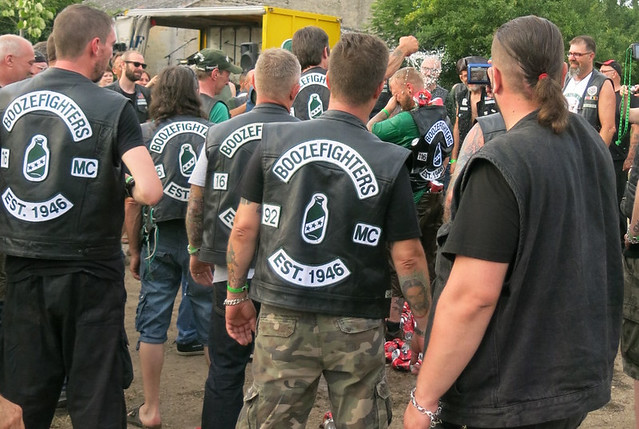 Someone will probably accuse me of saying hashers can’t use the “drinking club with a running problem” motto because someone else came up with the idea first. No, that’s not what I’m saying.

What I’m saying, and have been saying, is that much of what we do as hashers has been imported from outside sources. Nothing wrong with that … it’s inevitable and natural that a social running group like ours will adopt traditions and rituals from other groups.

But there are many new hashers who think hashing has always been the way it is today.  Is that harmful in any way? No, of course not. But sometimes new hashers travel, and in their travels they may come across more traditional kennels. Kennels where they don’t have circles, for example, or sing, or use hash names.

I’m saying that hashers should have a better understanding of their own history. That there are a lot of different traditions under hashing’s tent. That old-school hashing was and is a simple affair: good mates, good trails, and a few beers afterward. That we should keep our modern “traditions” — the circles, the singing, the drinking games, the awards — in perspective.

Enjoy what you’ve got, but know where it came from. That’s all I’m saying.