Origins of “On On”

Where does “On On” come from? Who knows? The only thing I’m fairly certain of is that it didn’t come from hashing.

The earliest documented use I’ve found dates back to 1946. “A Drinking Club with a Motorcycle Problem” appears on the patch of an early outlaw motorcycle club, the Boozefighters MC (the bikers who raised hell in Hollister, California in 1947, inspiring the 1953 Marlon Brando movie The Wild One). If you can find a quote from G or Torch Bennett or Horse Thomson where they used the motto in the late 1930s or early 1940s, I’ll reconsider. But as far as I know we never called ourselves a drinking club with a running problem before the 1970s.

The other day, after I wrote about Hash Haven, the online support group for hashers dealing with depression and suicidal thoughts, members there had a long debate about what many of them see as a hurtful, politically incorrect, and exclusionary motto used by some hash kennels: “No Poofters.” That never originated in the hash; it came from the 1970 Monty Python Bruces sketch. In the heyday of Monty Python, a lot of hashers thought the no poofters refrain was funny, and somehow it morphed into an unofficial motto.

How about “Rule Number One Is There Are No Rules”? It’s possible a hasher first said it, but if you Google it you’ll find it’s a widely used phrase. Thomas Edison allegedly said something similar in 1903: “Hell, there are no rules here. We’re trying to accomplish something.”

Okay, back to “On On.” This morning Chippendale sent me some information on the Royal Air Force’s 272 Squadron, which flew anti-submarine patrols from Scotland in WWI and long range shipping escort missions in the Mediterranean during WWII, and whose motto was … well, you’ll never guess: 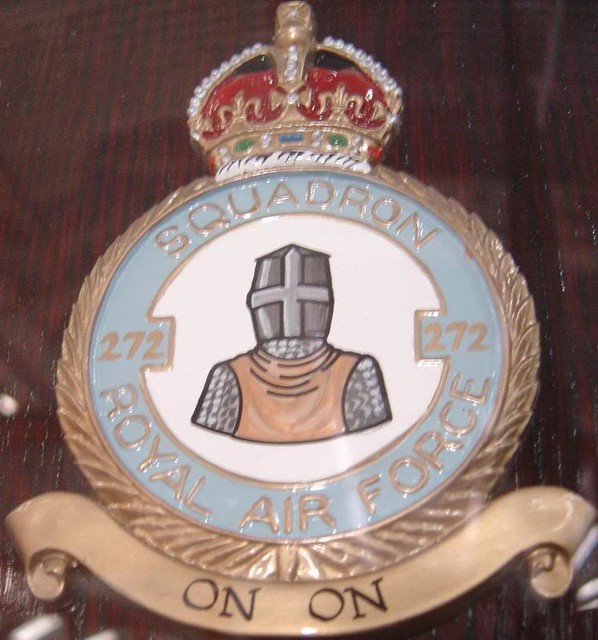 The plaques and patches I looked up all say On On, but the linked history of the squadron says it was actually On, On! (with an exclamation point, which is how many hashers say it as well). Looking at the symbol of the armored knight, I can’t help wondering if the phrase dates back even farther … possibly even to the Crusades?

There’s no point to any of this, other than to say that the hash knows a good thing when it sees it and isn’t ashamed to borrow when necessary. On, On!