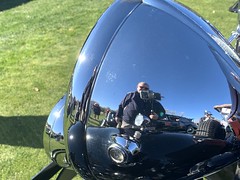 The annual collector car show on the golf course at Tubac was yesterday. So too was the annual Sunnywood Estates homeowners’ association meeting (on the agenda: the election of new board members … and I was a nominee). Guess which event I rode my motorcycle to?

Shoot, the outcome of the homeowners’ vote was pretty much guaranteed anyway. The outgoing board members had served three one-year terms each and were more than ready to hand the job over to new members. Since there were exactly as many nominees as there were positions on the board, I probably would have been voted in whether I showed up or not. In the end, Donna represented us at the meeting and I ogled cars.

Was I elected? You bet I was. And we meet at my house Thursday evening to figure out which of us will fill each position. Also, too, the new board members want to check out our remodeled kitchen!

Well, back to the car show. This has got to be my favorite photo:

I’m of the car show-attending generation. Jane Fonda urinal stickers were everywhere during my twenties and thirties, and I still see them from time to time. Many people my age, Vietnam veterans in particular, will always despise her. How many of us, I wonder, watch Grace and Frankie and fail to make the connection? Hey, if we’re capable of confusing Nancy Sinatra with Jane Fonda, more than a few, I bet.

Some of the same cars show up year after year, and I tried not to photograph them since I already have them in older Flickr car show albums. I concentrated on cars and details that were new to me, and this year’s show was especially colorful … or maybe it was my new camera, with all its pixels. I always look for the guy with the “Willy’s Jeep,” but he wasn’t there this year. Instead, there was a new guy displaying his “Willy Jeep.” One of these days someone’s going to get it right.

On-on to the coloful cars!

I haven’t labeled these photos, but this first four in this set are of two cars I loved, a 1929 Hudson Royal with wicker trim on a custom body, and the interior and exterior of a 1958 Mercedes-Benz 220S, similar to the car I learned to drive as a teenager.

This next set includes a Nash Rambler. I’m always on the lookout for Nashes, the family car of my childhood, but they just aren’t popular with the collectors. Unless they’re Metropolitans, which you see everywhere. There’s also a nice 1940s Cadillac limousine interior, and an in-your-face 1929 Caddy as well.

I’ll wrap up with some miscellaneous shots. Loved the skulls, the bug-eyed Sprite, the back-seat leg room of what once was considered a full-sized economy sedan, and a 1980 Harley-Davidson FXB Sturgis. The motorcycles otherwise were a disappointment. Mostly new Urals on display … hey, just because they look old doesn’t make them so.

I uploaded a total of 106 photos to my Tubac Car Show 2020 Flickr Album, so if you’d like to see the full-size versions of these photos, and many others, please click and visit. Among the photos are many which show display car placards, for those of you who like to identify brands, models, and years. Enjoy!