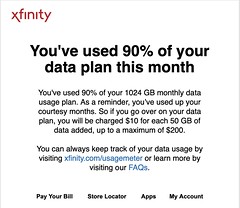 I’ve been getting these notices for some time now, but they usually don’t appear before the 29th or 30th of the month. This one came today and it’s only the 24th. It doesn’t bode well for our August Xfinity bill.

I spent twenty frustrating minutes with Xfinity customer service this morning. I don’t want to be That Person, the one who complains about Southwest Asia call centers, but there were, ah, accent difficulties on both sides. I grasped enough to realize they can’t remotely troubleshoot my system. I had an old phone number from the local Xfinity rep who helped us set up our TV and high speed internet connection a few years ago. I called and got a message, but at least the message indicated he’s still with the company. I left voicemail asking for help. Would sure love to get to the bottom of this.

The neighbor at the end of our cul-de-sac, he of the garage fire, is well on the way to recovery. 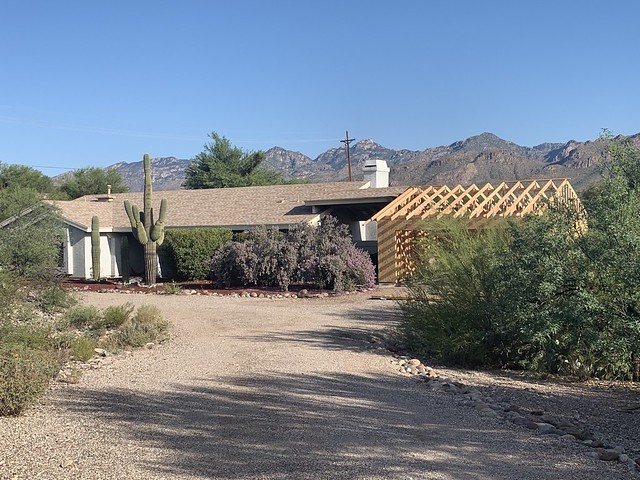 I haven’t spoken to him, but I’m guessing his insurance is covering most or all of rebuilding the garage. Hope so, anyway. Last month, the contractor who tore down the old garage brought in a tracked excavator. For some reason they didn’t trailer it to his driveway and unload it there, instead parking the flatbed carrier on the highway and driving the excavator into the subdivision, damaging our freshly resealed streets. The paving contractor came back in earlier this month and repaired the damage … no word yet on how much of an assessment we’ll get for that. Home ownership! It’s fun!

Mister B’s been playing a game with me, acting eager to go on his morning walk and then changing his mind once he’s out in front of the house, digging in and refusing to go a step further. We’ve aborted five or six morning walks in a row. Yesterday I loaded both dogs in the truck and drove them to McDonald Park. Different place, different rules, and we had a nice walk there (not such a great visit to the park’s dog runs, but more on that below). This morning, it was back to normal with Mister B. We walked up to the end of our cul-de-sac to check the progress on the neighbor’s garage, then walked back home, with good poopage along the way. I think Mister B feels he’s made his point and the game is over.

So … those dog runs. As I walked Maxie and Mister B through McDonald Park to the dog runs yesterday, I could see people with big dogs in the small dog area. I was kind of pissed about it … there are always one or two “oh my big dog is gentle and gets to use the little dog area” types there, but this was a bunch. I didn’t notice until we got there that the big dog area was empty. Turns out it’s closed for grass reseeding, and the small dog run is now the temporary big dog run. The county put up fencing to enclose the narrow corridor between the big and small dog areas, and it’s now the temporary small dog run. It’s about twelve feet wide by fifty feet deep … also muddy, lacking in trees, totally an afterthought.

As a displaced small dog owner, I felt like a second-class citizen. Of course I could have taken Maxie and Mister B into the enclosure with the big dogs, but I’m not comfortable doing that. If something were to happen, it would happen fast and I wouldn’t be able to break it up before one of my little guys got hurt.

Well, I did get a couple of nice photos while we were there. As you can see, the dogs were happy to be out and about, untroubled by the crappy little temporary enclosure. We didn’t stay long … I took them back into the people section of the park and we walked around for a while before heading home.

When we got home my phone chirped and there was a message from a member of Mister B’s original family, who wanted to know how he’s doing. Mister B’s first companion (“owner” and “master” are words we shun) was an elderly woman who lived alone, but who had family nearby. When she died the family took Mister B to the dachshund rescue where we found him. He was in holding, though … we couldn’t adopt him until the family decided whether they could take him in. Since they already had several dogs, they eventually elected to let Mister B live with us. They checked in on him right after we adopted him, and then yesterday checked again. It’s nice to know he was well-loved … and still is, as you can probably guess that by all the space he takes up on this blog.

So David Koch is dead, is he? In his honor I’m putting a dead car battery and four quarts of dirty crankcase oil in our residential garbage bin. That’s the kind of personal and corporate freedom he dedicated his life to, and it seems the least I can do.