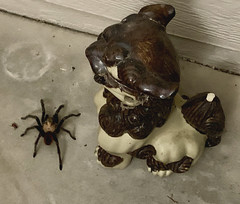 Polly came home late last night and found a small tarantula at our front door. I took its photo because in spite of living in the Sonora Desert we don’t see them all that often. So if it’s all the same to you I’m taking this sighting as a good omen.

When we first moved here and lived in a rented house on the west side, our son Gregory came to visit. We were sitting on the patio one day, keeping Greg company while he swam. And in one of those perfect moments he looked up at us from the far side of the pool and said “I thought this place would be crawling with tarantulas.” “Look behind you,” Donna said. A full-grown specimen, somewhere between a big mouse and a small rat in size, had picked that moment to amble across the pool deck behind Greg, and when he turned around it was at eye level, not a foot from his face. Looking back on that day, we’re lucky we didn’t have to drain and pressure-wash the pool.

So this critter on our doorstep last night? Probably a young adult; not very large as tarantulas go. There were plenty of bugs out front, attracted by the porch light, and no doubt he was enjoying a good nosh when Polly and I started making a fuss. When I traveled for a living I usually ate out alone and hated it when strangers decided I needed company and came over to talk to me. I bet this guy felt the same way.

The object by the tarantula is one of our shi shi dogs from Okinawa. Technically they’re shisa; not dogs but lions (though everyone calls them dogs). Okinawans place them in pairs on the roof or by the front door to guard their homes. The one with the toothy open mouth goes to the right; it keeps evil spirits out. The one with its mouth closed goes to the left; its job is to keep good spirits inside. Ours are still on the job, 28 years later and half a world away from the Ryukyus. 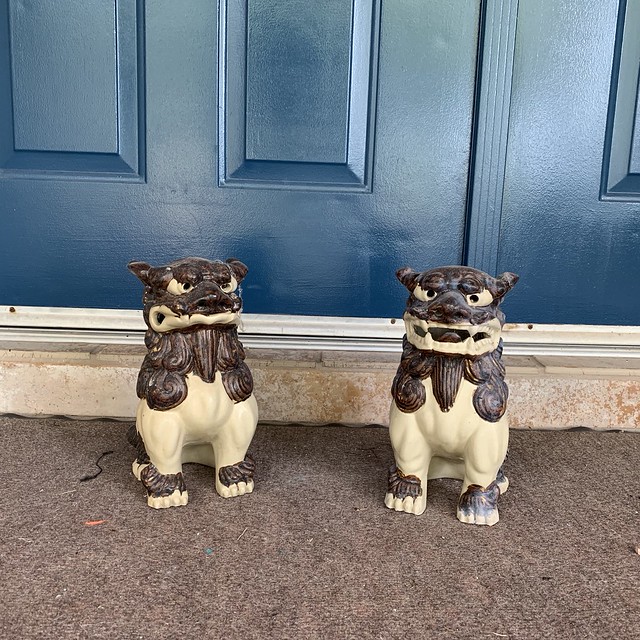 While Donna was in California last week, she made a side trip to my old school, Sacramento State College. Today it’s California State University, Sacramento, but everyone still calls it Sac State. She picked up a nice T-shirt and coffee mug at the bookstore and here I am with my alma mater swag: 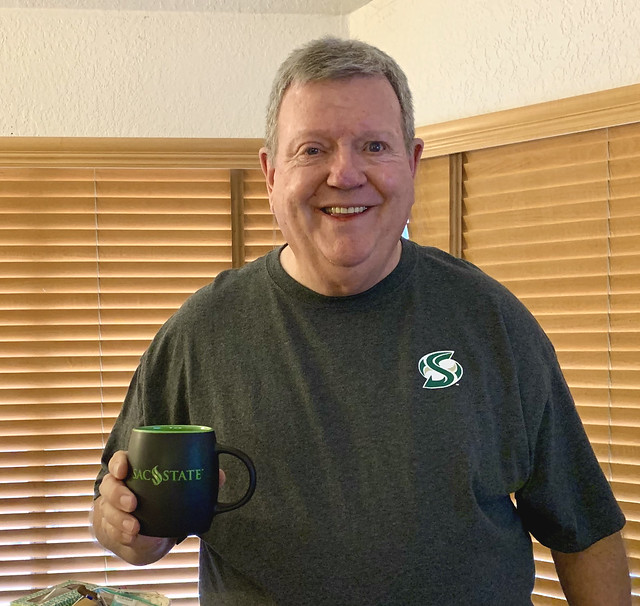 That’s the T-shirt I was wearing when I went all paparazzi on the tarantula. I wonder if he noticed?

Speaking of T-shirts, over on Twitter people are posting photos of Walmart shoppers wearing challenge shirts. These are Ts with generally belligerent sentiments on the back; one I’ve seen says “I’m a DRY WALLER. I love FREEDOM. I drink beer. I like BOOBS. I own guns. I PROTECT MY FAMILY. If you don’t like it, MOVE.”

Naturally people are turning the idea into occupational memes. As in “I’m an OPHTHALMOLOGIST. I love 3 DAY WEEKENDS. I eat CATERED LUNCHES. I don’t know how to change the OIL in my CAR. If you don’t like it. MOVE.”

Mine would say “I’m a retired MILITARY OFFICER. I get a PENSION. I’m SET FOR LIFE and you can SUCK IT. I judge you on your SPELLING and GRAMMAR. If you don’t like it, GET AN EDUCATION.” Except I wouldn’t be caught dead in a Walmart.

Another meme making the rounds: this political cartoon. 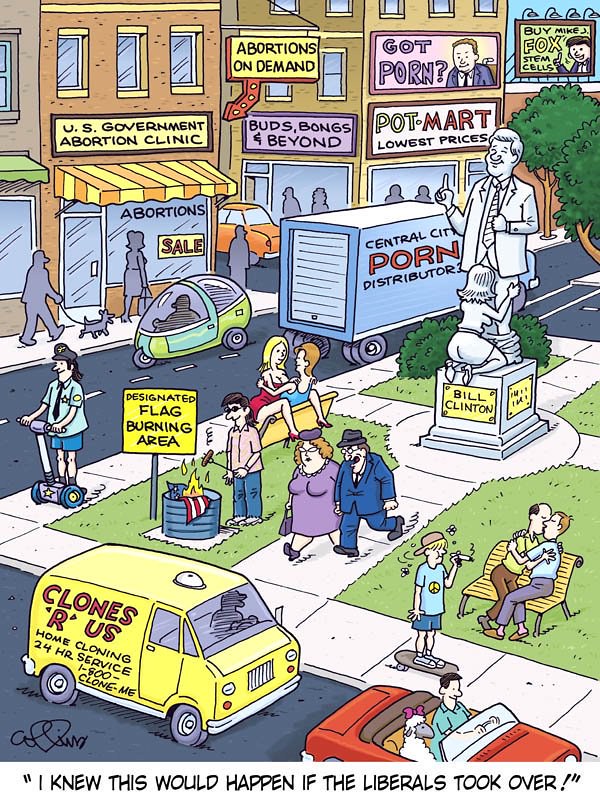 The other day I mentioned Pima Air and Space Museum’s Martin Marauder. As with most of my flying-related entries I cross-posted it to an aviation group on Daily Kos (you can see it here). Judging by the comments there, what folks remember about the Martin Marauder is its reputation as an aircrew killer. One a day in Tampa Bay. The Widowmaker. The Flying Prostitute (no visible means of support, haw haw). And so on.

The B-26, introduced in 1941, had a higher wing loading than other medium bombers of the day and consequently a higher stalling speed. That meant you had to fly faster on final approach to landing: 120 to 135 mph depending on aircraft weight. The B-25 Mitchell, a contemporary medium bomber, flew final at 100 mph. That’s what set the Martin Marauder apart and gave it its deadly reputation. In fact they did crash a lot of them in training at MacDill Army Air Field in Tampa (one a day in Tampa Bay), but once aircrews learned to fly the airplane properly, the B-26 proved to be a great medium bomber, and I’m still scratching my head trying to figure out why virtually all of them were scrapped and melted down at the end of the war, while lesser medium bombers like the B-25 Mitchells and A-26 Invaders continued to serve into the Korean War and beyond.

Speed is relative. People ask me what it’s like to fly at more than twice the speed of sound. I tell them that while you can sense resistance as you pass through the transonic shock wave, a feeling of pushing against an invisible soft pillow in the air, once above the Mach everything feels normal again. And since you’re usually way up there when supersonic, far above the earth and clouds, there’s nothing whizzing by to give you a sense of speed. It’s numbers on gauges. By contrast, when you’re on final approach to landing you’re close to the ground and more aware of your speed than you are at altitude.

Was it really that big a deal for a WWII pilot to transition from an airplane that took off and landed at 100 mph to one that did it 20 to 35 mph faster?

Once, when I was flying F-15s in the Netherlands, I hitched a backseat ride in the two-seat trainer version of a Canadian CF-104. The 104’s nickname was “the Zipper,” because with its tiny thin wings you had to fly fast or not at all. It too was called the Widowmaker, and not without reason.

My F-15 flew final at around 175 mph and touched down at around 140 (I use miles per hour instead of knots because that’s the speed measurement used by the WWII bombers mentioned above and I want readers to be able to compare). F-15 landing speeds were similar to those of the F-4 Phantom and most other jet fighters.

The Zipper, though … damn. You flew final at 195 mph (adding speed for higher fuel weights) and touched down around 175. If you had to fly a no-flap approach you added another 25-30 mph. The 104 was insanely fast compared to anything else I’d flown … but I didn’t notice the relative difference in speed all that much when the Canadian pilot up front let me fly an approach from the back. When the Zipper was on speed it just felt right, but of course I kept one eye on the airspeed indicator as well.

In pilot training in the 1970s our primary trainer was the Cessna T-37, a fat-wing little jet that flew final at 115 mph and touched down around 90. Halfway through the one-year program we transitioned to the Northrop T-38 Talon, a supersonic trainer with thin, stubby wings, intentionally designed to fly like the F-104. The Talon flew final at 155 (again, adding speed for heavier fuel weights) and touched down at around 140 mph. The speed differential between the T-37 and T-38 was even greater than that experienced by WWII aircrews coming to the B-26 Marauder from similar but slower bombers, and yet I don’t remember it being any kind of deal. We never, for example, called the T-38 a widowmaker. Speed is relative, and anyway, that’s what training is for.

I think the thing with the Martin Marauder was psychological. Whenever I took non-flyers up on incentive flights in two-seater F-15s, without exception the main thing they worried about was throwing up. Their friends would set them up to be airsick by talking and joking about it nonstop in the hours and days leading up to the incentive flight, and in nine cases out of ten they would indeed fill a couple of barf bags. I think something similar happened with aircrews learning to fly the B-26 Marauder at MacDill in WWII. They knew they were going to tangle with the Widowmaker, a notoriously treacherous airplane, and those planted fears became a factor. The Marauder had a rep and new aircrews allowed it to live up to it. Naming calls, to use an archaic phrase.

Well, thanks for hanging with me. I have to get back to hating freedom, beer, and boobs.

Update (8/19/19): replaced the political cartoon with a complete version and credited the cartoonist.