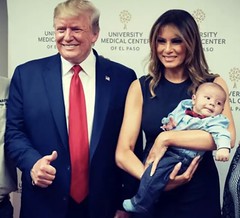 I don’t want to do a lot of digging, but I could swear I read in a news report that the baby in this photo sustained broken bones when its mother and father threw themselves on top of it to shield it from the El Paso Walmart murderer’s bullets, sacrificing their own lives in the process. So when I saw this photo of the Trumps flashing movie star grins with an apparently uninjured infant, I questioned other news reports that the child’s aunt and uncle had brought it back to the hospital for a staged photo op. Must be a different child, I thought.

I said so on Twitter, and no less a person than journalist Nancy Nall Derringer, whom I esteem, responded, saying the reports she read didn’t mention broken bones but instead said a bullet had grazed the baby’s hand, and if I looked at the photo more closely I’d see his fingers are wrapped. So I looked closer and indeed they are, so apparently the Trumps really did the shit-and-grin thing with the youngest survivor, tragically orphaned, of one this gun-worshipping country’s latest mass murders.

My god. But my point is, you can’t believe a damn thing you read or hear or see in the news, because they’re firing professional reporters and editors and hiring minimum wage temps in their places, and those temps’ll write any damn thing they please because no one’s checking their work.

So far today I’ve seen at least a dozen tweets from reputed journalists claiming Jeffrey Epstein was on suicide watch in the Manhattan Correctional Center, but not one word from MCC officials confirming it. Was he really on suicide watch? Because if he was, how did he manage to kill himself? And I just read a tweet from Carol Leonnig, a Washington Post reporter and MSNBC contributor, claiming “Epstein told authorities someone tried to kill him in a previous incident weeks earlier.” He did? Really? Was that in the news? If it was, I don’t remember hearing about it. So can I believe what Ms Leonnig says?

Okay, things are settling down a little bit. No less a source than The New York Times now reports that Epstein was not on suicide watch … he’d been taken off a few days ago. But if you read the linked article, even that is anecdotal … there’s still been no official word from MCC officials. So can I believe that?

Best not to believe anything. But I’m human, and I need to believe something. Which opens the door to conspiracy theories, and now I’m no different from some poor deluded QAnon loon. But the core of the Epstein story—decades of Epstein recruiting, sexually abusing, and sharing underaged girls with his famous and monied “friends”—is itself a conspiracy, and a real one. A conspiracy that, in fact, doesn’t sound a whole hell of a lot different from the Pizzagate sex slavery stories dear to the hearts of QAnon loons!

They’re saying Epstein’s suicide won’t end the revelations about sexual abuse and pedophilia at the hands of rich and powerful people because the records seized when Epstein was arrested have now been unsealed, but I have a sinking feeling the story’s going to fizzle away now, at least as far as the media is concerned, and Trump & friends will continue to skate. I hope I’m wrong. But I fear I’m right.