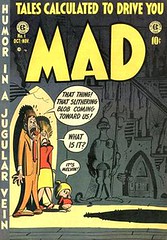 The first issue of Mad came out in 1952. I would have been six and wouldn’t have known what to make of it had I seen it. I bought my first issue in a drug store in 1958. I was twelve, and instantly hooked. Although everyone calls it “Mad Magazine” today, as far as I know it was still just “Mad” when I started reading it. Hell, as far as I know it’s still just “Mad,” as it prepares to print its last regular issue.

When I started reading Mad, it had a habit of recycling material from early issues. I may be confused on that: it’s equally possible friends had copies of older issues and let me read them. Either way, I particularly remember the cartoons of Harvey Kurtzman and Wally Wood, and I definitely preferred the older stuff. Some of the new stuff was good, though: Don Martin was drawing for Mad in 1958, with his floppy-footed characters and wet-your-pants hilarious farty sound effects like “FLEEN!” and “FOOSH!” Mad made me feel grown up and wise to the world in my early teens. I fell away from it when I was 14 or 15, but I’ll always remember it fondly.

Speaking of falling away from things, I see some folks feel they can no longer celebrate Independence Day, what with the evils that have been revealed about the nation’s past and new evils being uncovered every day. I get that, but the evil springs from human nature and crosses all national and cultural boundaries, and I’m hard pressed to think of any other nation or population that isn’t dealing with the same issues, past or present.

I wonder if the woman who wrote the linked letter didn’t learn about our nation’s past in school. She writes as if it’s new to her, which I suppose would make it quite a shock. They certainly didn’t teach the squirmy stuff, let alone the really bad stuff, back when I went to school. I think that’s a mistake. We should be taught our nation’s past, bad and good. We’d be better adults for it, and less tolerant of those who want to do evil in our name today.

When it comes to my own relationship with Independence Day, it’s kinda like Christmas. I quit believing in Santa Claus a long time ago, and then Jesus, and when I look at the holiday now I see an orgy of consumerism. In spite of that I still feel the Christmas spirit and appreciate the idea of a holiday where we think more of giving than receiving. Similar feelings spill over to Independence Day. Much of my country’s past is horrific, and some of what’s being done in our name today is just as horrific, but we did once stand up to powerful colonial masters and rebel, and what we fought for then, liberty and justice for all, remains a worthy goal and an idea to celebrate.

Sure, when our forefathers said “liberty and justice for all,” they were thinking only of white men, and property owners at that, but today we extend the idea to all men and women, and when we practice what we preach the USA really is a beacon to the world. Independence Day, to me, is as much about celebrating that aspiration as it is about celebrating our freedom. 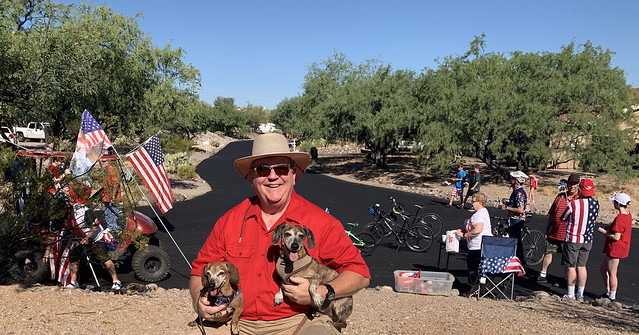 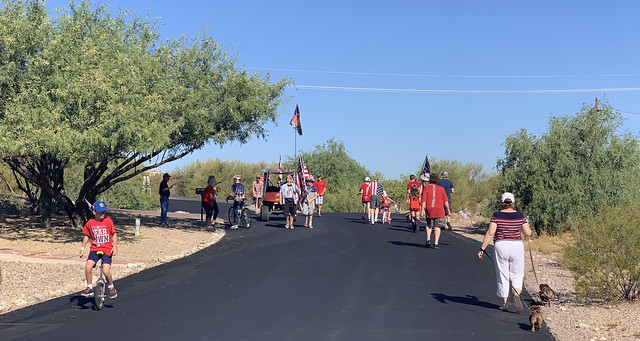 So, as we do every year, we celebrated. Our neighborhood parade was small but spirited. And look at those freshly-paved roads, would you? Really highlights the red, white, and blue everyone was wearing! This year we moved the parade up from 9 to 8 AM, and I’m sure Maxie and Mister B appreciated that … if we’d waited an extra hour the pavement would have been too hot for their paws. The parade was followed by a potluck brunch at a neighbor’s home.

Polly’s battery died, so after brunch I wheeled out the charger and later helped her get a new battery from the car parts store on the corner, happily open on the holiday. I grilled dry-rubbed ribs, which we had for dinner with corn on the cob and cole slaw, followed up by Stranger Things on Netflix (man, I must have read a dozen articles and posts this week about how the Stranger Things kids have grown, but that turned out to be hype—of course they’ve grown, but they’re still young teenagers, and look very much the same as they did in the first two seasons).

One thing we did not watch was Trump’s thing in front of the Lincoln Memorial, with the tanks and planes. My impression, from reading news coverage this morning, is that attendance could have been better and that the display of military might, while not exactly a fizzle, was hardly Red Square-worthy. I predict Trump will be unable to resist complaining and that his supporters will blame the military for not putting on more of a spectacle.

I wonder who or what they’ll blame for the part of the Dotard’s speech where he said “Our army manned the air, it rammed the ramparts, it took over the airports, it did everything it had to do, and at Fort McHenry, under the rockets’ red glare, it had nothing but victory.” The fake news media? A teleprompter shorting out in the rain? Demoncrats? Anything but senility, that’s for sure.

Let’s get back to being a beacon to the world, okay?

One thought on “What, Me Worry?”