Danger at the Door

Up early on a beautiful Sunday morning. Fed the dogs, started a few loads of laundry, wrote a book review, walked Mister B, and made myself breakfast. Now for some bloggage. 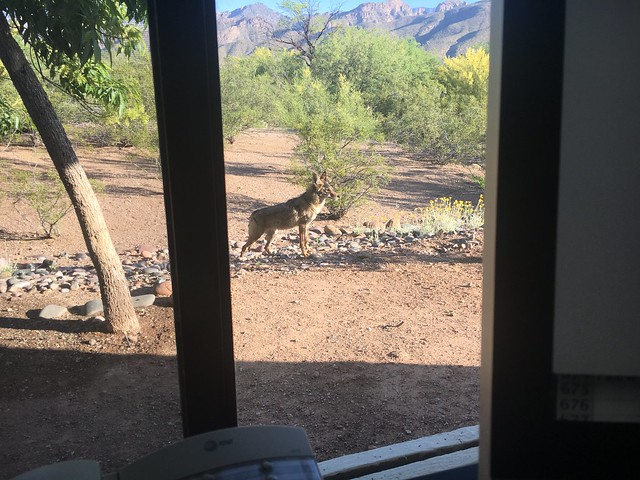 While I was working on the book review, this critter sauntered up to the house. Polly’s cats often sun themselves outside her bedroom window, so I hollered down the hall at her to call them in. I needn’t have worried … yes, the cats were out, but they had an eye on the coyote the whole time and were in no danger. Not so the hairless Rex cat we had several years ago, who liked to wander but one day wandered too far and never came home, a fate shared by many a neighbor’s pet. In addition to a pack of resident coyotes, our subdivision is home to a squadron (look it up, sheeple) of javelinas, two bobcats, and several large hawks and owls. The small pets who survive are the wary ones, like Mister B, who constantly checks six on our morning walks. I never see what he sees, but I take it on faith this or another coyote is lurking nearby, and Mister B knows it.

My friend Ed and I changed the Goldwing’s rear disk brake pads a few days ago, and the new pads are so thick they rub against the rotor … not a lot, just a little. For these first few miles, this means there’s a tiny bit of resistance on the rear wheel when I’m at a stoplight, enough to keep the bike from rolling forward or backward, something I normally have to control with my legs. I’m going to miss this when the new pads wear in and I have to start using my muscles again.

Finally saw my first Kentucky Derby … actually my first horse race of any kind. Now here’s a televised sport I can endure while pretending to be as into it as everyone else in the room. I can do anything if I only have to do it for two minutes! Actually it was quite fun. One of my book club friends, Mary, hosts a Kentucky Derby party every year, and since I was invited and she’s a friend, I went. Some of the guests dressed up, just like the rich white people at the actual event, and there were mint juleps on hand (and regular old lemonade for teetotalers like me). It’s good to have friends, especially when you’re home alone with not much to do. I’m just sorry I left right after the race. There was probably a riot at Mary’s when race officials took the win away from Maximum Overdrive and gave it to Country Home. That would have been fun, too.

This is cute: a low-flying F-15 Eagle in afterburner sets off a parked Tesla’s “sentry mode” alarm (if you listen carefully, you can hear another car’s alarm go off as well).


Actually this happens all the time. We get the occasional loud jet at Davis-Monthan AFB here in Tucson, and when one takes off parked cars start honking all over the city. Locally based A-10s and C-130s aren’t loud enough to trigger alarms, but a visiting B-1 or a formation of F-35s? Hoo boy. Back in the day piston-engined B-36 bombers were even louder, but on the other hand cars then didn’t start honking at the slightest provocation.

I started watching the Hulu TV adaptation of Stephen King’s “11.22.63.” I loved the book, especially King’s notion that the past might actively resist attempts to change it, and that if you did manage to go back and kill Hitler (or, in this case, prevent the assassination of John F. Kennedy), the future might be altered in horribly unpredictable ways. Several of King’s novels are unnecessarily drawn out, but not this one. After watching only one episode of the TV series, though, I can see the producers have decided to draw it out and then some, like they did with another recent Stephen King TV adaption, “Under the Dome.” They inserted the past-resisting-change thing in episode one, something that doesn’t happen in the book until one of the final chapters, and I’m wondering what they’re going to do to hold viewer interest later in the series, having shot their wad right at the beginning. Maybe nudity? Even that wouldn’t have saved the awful “Under the Dome,” and it probably won’t help this one either. Oh and one more gripe while I’m at it: those beautiful 1950s and 60s cars driving by in virtually every scene? They weren’t shiny and perfect in real life, guys. They had bald tires, dents, rusted out mufflers, and were generally dirty (kudos to the producers of an unrelated Netflix series, “The Umbrella Academy,” for getting old cars right). The only time the past ever looks like a picture postcard is when it’s depicted on picture postcards.

I recently posted an Air-Minded aviation article centered on the experiences of a friend, one of the Air Force’s first female fighter pilots, a woman who flew the A-10 Warthog in combat. As with most of my Air-Minded posts, I cross-posted it to my diary page on the Daily Kos website. Daily Kos is the hub of a thriving online progressive community with thousands and thousands of members. When I post here on Paul’s Thing, few of my 200-some readers ever comment (I know you read this blog, dear friends, and I thank you for coming back to it again and again, but c’mon, admit it, you rarely engage with what I write). It’s different on Daily Kos, where my posts often generate lively discussions, with some comment threads running into the 100s.

But not this post, and I’m mystified. Stumped. It’s about women flying fighters, a hot-button topic from the 1990s right up to today. It’s progressively feminist. My friend Xena even talks about peeing, something I thought would be a sure draw. What gives, people?

One last thing: I wish prominent people like Nancy Pelosi would stop speculating about Donald Trump trying to hold onto power if he loses the election in 2020. I’m a big believer in the old superstition “naming calls”; the idea that putting fears into words will call those fears to life, a cruder way of warning against making self-fulfilling prophesies. The media loves nothing more than doom & gloom predictions on the part of prominent people and celebrities (unless it’s sex scandals and naked selfies of prominent people and celebrities, that is), and they’re already framing these fears as the end of American democracy, just a little more than a year from now.

I want to go back to something I posted here a few days after the Electoral College took the presidency from Hillary Clinton and handed it to the runner-up, Donald Trump (perhaps inspiring the race officials at Churchill Downs yesterday). I summarized a cautionary article by Masha Gessen, a journalist who lived in autocracies most of her life and spent much of her career writing about Vladimir Putin’s Russia. Her article came out the day after the election, and was titled “Autocracy: Rules for Survival.”

Believe the autocrat. Trump’s not going to seek common ground with those who opposed him. He’s not going to change. All the horrible suggestions he made during the campaign? He meant everything he said and intends to follow through. We have to resist, and resist hard.

Don’t be taken in by small signs of normality. The media is all-in for downplaying Trump’s racism and anti-Semitism, but don’t fall for it. There’s nothing normal about any of what he represents.

Institutions will not save you. We can’t count on the Democratic minority in Congress to resist Trump, as I suggested above. If history’s a guide, they’ll cave. The FBI, as we have seen, is partisan. We the people have to resist, and the massive protests we’re seeing in American cities today is a good sign we will. Join the ACLU if you haven’t already.

Be outraged. Going along with resisting the “normalization” of white nationalism and anti-American values, we have to keep our outrage alive. Once again, there’s nothing normal or acceptable about what’s happening today.

Remember the future. This presidency is going to be a disaster, and we’d better be prepared to take the reins again. Keep the faith and plan ahead.

Everything she said then holds true today, even more so. I’m really starting to worry … especially now it’s become obvious the Democratic majority in Congress isn’t going to lift a finger to stop Trump … that simply electing a Democratic president next year isn’t going to be enough to fix the damage that’s been done to our government and institutions.

Thank goodness there’s a new episode of Game of Thrones on tonight to help us take our mind off things.

2 thoughts on “Danger at the Door”