Trouble in Halfmindistan & Other Updates 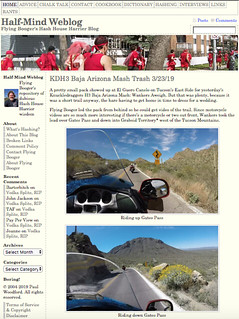 I have three blogs, all hosted on the same server: Paul’s Thing, which you’re reading now; Crouton’s Kitchen, an on-line cookbook; and the Half-Mind Weblog (left), a Hash House Harrier blog. I don’t know how or why, but one or two lines of WordPress coding on the Half-Mind Weblog got scrambled and it’s been semi-crippled ever since. It wasn’t a show-stopper; just that unlike the other two blogs I could no longer update the WordPress code when new updates came out, and some non-essential formatting features weren’t functioning. But I could add new posts and images when I wanted, and I know how to manually format my posts, so I put off trying to fix it.

Two nights ago I wrote a Half-Mind Weblog entry and discovered I couldn’t post it. The “publish” function has vanished, and there doesn’t appear to be a workaround. Now that’s a show-stopper. I’m going to have to start over with a new WordPress installation, then transfer the data (years’ worth of posts, rants, interviews, Ask Doctor Down-Down columns, etc) from the old Half-Mind Weblog to the new one. It’s going to be a mess for a while, but only on that one blog, not this one or the cookbook. If you’re a Half-Mind Weblog reader, please be patient. I barely know what I’m doing, and it’s been years since I’ve messed with WordPress installations.

Sorry to burden you with administrivia. I could let the Half-Mind Weblog die a natural death … my interests have moved away from hashing, and I no longer have anything of importance to contribute to the hashing community. For some reason, though, I feel I should preserve what’s there for current and future hashers.

Donna’s sister Georgie came to visit us in Tucson. Her sister Robin, who like Georgie lives in Michigan, flew to Las Vegas. Donna and Georgie drove to Las Vegas Monday, spent the night with Robin at our son Gregory’s house, and hit the road to California on Tuesday. They’re visiting family there, in the Bay Area and north of Sacramento, including two aunts and an uncle who are in their 90s and not expected to live much longer. Later next week, Donna and Georgie will drop Robin off in Palm Springs, where one of Robin’s daughters lives, then drive back to Tucson. Here they are three days ago, leaving Las Vegas.

I’ve been on my own since Monday and will remain so until next Friday. Well, Polly’s here, but I don’t see much of her. It’s mostly me and the dogs. Happily, I have things to do. Like working on the motorcycle.

I spent yesterday morning and early afternoon with my friend Ed, replacing tires and installing new rear brake pads on the Goldwing. With all the other recent maintenance we’ve done on this old bike (19 years old now!), it’s literally like new again, possibly better. As always, I’m indebted to Ed for his friendship and the use of his garage, tools, expertise, and labor.

I have a hot date with our friend Mary Anne tonight. We’re going to Jerry Bob’s for the Friday night fish fry, where I plan to share my latest lab results (Mary Anne’s an RN and in addition to being our friend is our medical advisor). I’ll probably scout a hash trail over the weekend. Next week I’m pulling down two volunteer days at the air museum. Donna’ll be back before I start feeling too sorry for myself. I hope.