This is my lunch bag, which I’ve decided to nickname Brett.

Brett tells me he’s been the victim of a calculated and orchestrated political hit fueled with apparent pent-up anger about President Trump and the 2016 election, fear that has been unfairly stoked about his sandwich molestation record, revenge on behalf of the Clintons, and millions of dollars in money from outside left-wing opposition groups.

Judging by the expression on Brett’s face, I’d say he’s pretty worked up about it, and I wonder if he’s emotionally suited to the job of keeping my lunch cold.

You probably remember me bitching about how uncomfortable it was to drive one of Pima Air & Space Museum‘s two new electric trams. Well, I take back everything I said. 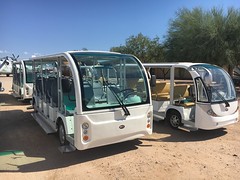 As I suspected, the accelerator and brake pedals on the large tram were adjustable after all (they told me at first they weren’t). Now that maintenance has repositioned the pedals closer to the floor and relocated the driver’s seat a few inches aft, the large tram is as nice to drive as the small one, and all is well with the world.

That’s not all: the museum sprang for two wireless mics. They’re pretty slick: you plug a dongle-type receiver into the tram’s microphone jack, then clip a small battery pack and mic to your shirt. Before, we had to hold a wired mic in one hand while steering with the other. Now we can narrate tours with both hands on the wheel, or even talk to passengers while walking up and down outside the tram at the start of the tour, our words amplified through the tram speakers.

Of course the battery packs contain (wait for it) batteries, which happened to be almost dead when we tried the new mics out for the first time yesterday, and thank goodness we’d brought along the old wired mics as a precaution. Oh, well … next time we’ll do it right.

My Goldwing is still at Ed’s garage, still in a disassembled state. Ed and Matthew have the new steering head bearing ready to install, but we’re waiting for the throttle cables I ordered. Ed says the new cables will be easy to install with the forks and triple clamp off, so there’s no hurry to put the bike back together before then. With luck the cables will come today or tomorrow and I’ll take them right over to Ed’s. If they don’t come before Thursday, when Donna and I leave for Missouri, Polly will have to deliver them.

Ed says my steering head bearing, which has about 105,000 miles on it, is well worn, so it’s good we’re replacing it. The bearing is more complex than I’d thought: here’s my triple clamp and steering head, with the old bearing disassembled and laid out for inspection on Ed’s workbench: 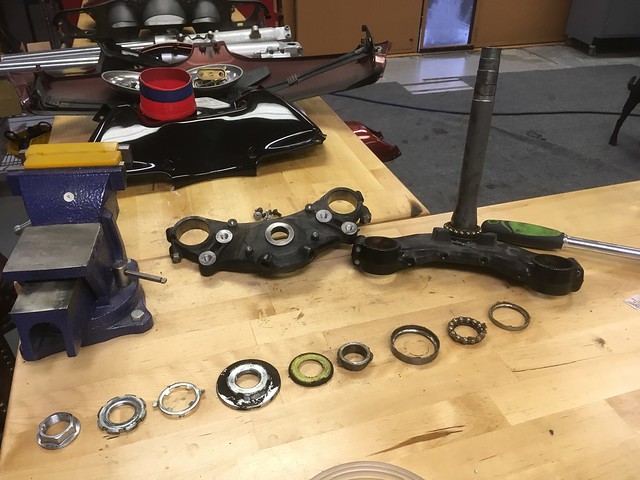 We’re hoping our contractor, Michael, will finish painting the house today or tomorrow so we can pay him before we leave and not have to leave that task to Polly, who’s working full-time now and might not be here when Mike finishes up.

The bulk of the job has been prep work: replacing damaged siding and corner pieces, caulking and sealing cracks and applying primer, but now that’s done and Mike is spraying on the actual paint. Here’s a photo I took yesterday after getting home from the museum. You can see Mike in the shadow under the patio, painting the underside of the patio cover, and Mr. B out in the yard keeping an eye on him. The house itself will be a light tan, with white door and window trim, and dark blue for the doors. 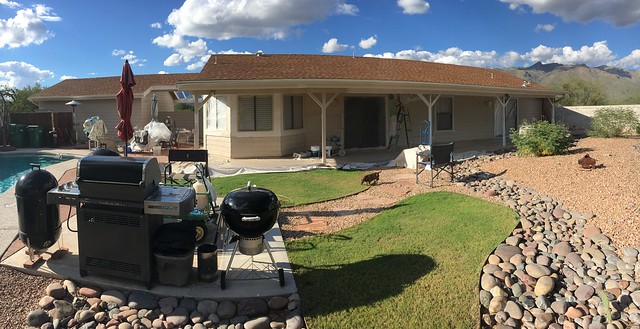 I probably won’t have time to share photos of the finished job on Paul’s Thing before our trip, but I’ll post updates on Facebook until I can get back to the blog, probably in a couple of weeks.