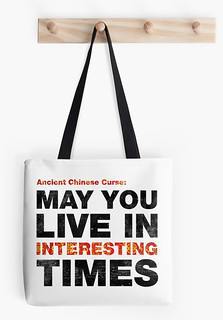 Today someone tried to add a spam comment to a blog post I wrote ten years ago. I reviewed the post after trashing the comment: the text is still there but the photos are gone.

In my beginning blogger days I uploaded photos to the host server, but they took up a lot of room and kept pushing me over the disk usage limit. Eventually I took them off the server and started over, this time using Flickr as a photo host. That, of course, left holes in older posts where photos used to be.

Does anyone ever look up old posts on this or any other blog? I doubt it, but some of my old blog posts are important enough to me that when I have time I’ll dig up the original photos, upload them to Flickr, and put them back where they belong.

The post that attracted comment spam today is not in that category, so I’m leaving it alone. Gotta admit, though, it ain’t easy … I’m a perfectionist (enough of one, Donna will tell you, to put me on the autism spectrum), and I wasted half an hour in the photo archives before getting a grip.

Recovery from knee surgery continues apace. This Saturday we got the Trail Trash together again for a neighborhood ride to Agua Caliente Park and back. The girls got lost (almost as if they hadn’t ridden the same route dozens of times over the past few years) and turned back early. Darrell and I were almost to the park when I got Donna’s message, so we turned back too. Still, it was a decent ride, at least for two of us, into a strong wind outbound and a nice push from behind on the way back home. Next week we’re meeting at Udall Park for an even longer ride down the Pantano Wash bikeway.

In a previous post I lamented the driver-unfriendly cockpit of one of Pima Air & Space Museum‘s two new electric trams. After talking with Amy, our volunteer coordinator, I’m feeling optimistic the museum is working to fix the problems. That optimism carried me through two tram tours yesterday, and though the larger of the two trams is still torture to operate, it seems a little less so and I wasn’t dragging my leg like a Walking Dead extra afterward, as I did the previous Monday.

Here are two short videos I shot yesterday, showing Amy checking out my co-volunteer Dick on the new trams. They’re driving the small tram in the first video; in the second I’m sitting behind them in the large tram, and you can see some of the museum’s aircraft as we drive past.

All in all, I love our new electric trams, especially the absence of noise and exhaust fumes. Once the museum makes changes to the driver’s position in the large tram they’ll both be a pleasure to operate. Now that we’ve capped the number of tram riders, museum visitors will have a little more shoulder and hip room, and it’ll be a pleasant experience for everyone.

Here’s a photo of the museum’s newly-acquired Cathay Pacific Boeing 777 on the restoration pad. This thing is huge: 47 feet longer than the museum’s B-36 Peacemaker, 23 feet longer than our Boeing 787 Dreamliner. Honestly, I wonder how they’re going to shoehorn it in among the other outdoor exhibits once it’s ready to go on display. 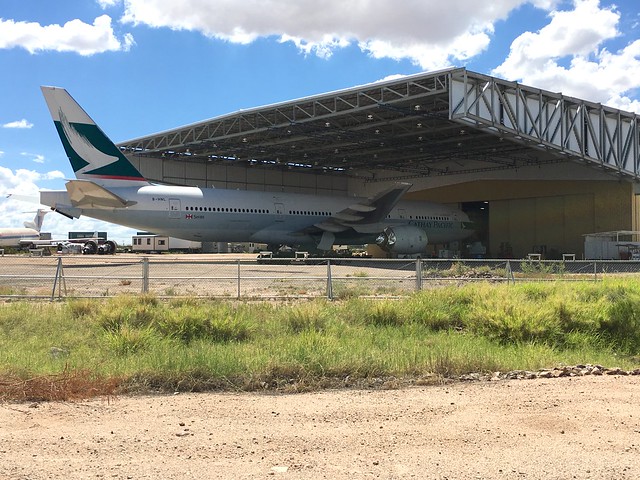 You haven’t heard much from me lately on Kavanaugh, or Trump, or really anything political. Like you, I’m crushed under the tonnage of scandal and noisy distraction passing for news these days. I think Kavanaugh’s nomination is toast in light of revelations about his past, but even without the drinking and sex stuff, shouldn’t the fact he was suddenly able to pay off some $200,000 in gambling debts on a federal judge’s salary have been enough to disqualify him in the first place? Not to mention the gambling?

Of course I may be wrong. The GOP is so tribal now they may just confirm Kavanaugh out of spite. Spite seems to be behind almost everything they do these days, and I’m sorry to see it becoming a motivator for progressives and Democrats as well. Yes, we owe them one for Merrick Garland, and I’m as eager to kick ’em in the balls as anyone else, but can we not find a more worthy champion than that Michael Avenatti guy? He’s such an obvious bad actor it staggers me not everyone can see it (or that they can see it, and are willing to hold their noses while he does his self-aggrandizing thing).

At book club the other night, a woman I respect shared her conspiracy theory with me: Trump will hang on for two years and one day, then resign. Under the Twenty-Second Amendment, this’ll give Pence a full ten years to implement the religious right’s agenda, plenty of time to transform the United States of America into the Republic of Gilead. Now I’m not one for conspiracy theories, but this one sends chills up and down my spine. It also helps explain why the GOP is so hell-bent on suppressing Democratic Party voters, and makes me think they’ll welcome more Russian electronic voting machine manipulation in future elections.

Friends, we have to turn out and vote. We simply have to. And it probably wouldn’t hurt to check that you’re still registered to vote in your state, especially if it’s a red one.