We Gonna Rock Down to Electric Avenue

… and then we’ll take it higher.

For months now, contractors have been building a new volunteer center at Pima Air & Space Museum. When I went in yesterday it was open, and I became one of the first volunteers to use it. The really big surprise, though, was finding two new electric trams parked where the old gasoline trams used to sit. After a quick checkout I was the first docent to drive them … and yesterday’s museum visitors were the first to ride them.

I broke one of them straight away, although “broke” is a little harsh. There was a feedback problem with the built-in microphone on the first electric tram I drove, but after troubleshooting I was able to find a workaround.

The trams are articulated, with two sections each. The larger one can carry up to 48 passengers; the smaller one only 16, but it has a wheelchair section with a folding ramp. The smaller one has well-positioned controls and is easy to operate but the big one’s a bitch, at least for anyone with long legs and stiff knees: I had to put a pad on the seat to sit higher, plus a block on the floor to bring my foot up to the high-mounted brake and accelerator pedals. Overall, though, I love ’em. Quiet, exhaust free, plenty of torque and power, enough battery reserve to run four tours a day in 100+ degree heat. Oh, and they’re sharp looking.

On my drive home I passed a Tesla Model X, the first one I’ve seen on the road. Having just spent the day at the controls of new electric trams, I felt a bond of kinship and almost waved. [insert ironic emoji here]

So why no photos of the new volunteer center? The battery on my iPhone was at 100% when I drove to work. After taking selfies with the new trams it was down to 57%. After uploading two of the photos to Facebook it was down to 28%, so I shut the phone down. On power-up, half an hour later, the battery was at 10%. Obviously something’s wrong. I used to be able to take and upload dozens of photos a day and still have battery power in reserve.

Which means I’ll get around to documenting our new volunteer digs next week. Meanwhile, I guess it’s time to shop for a new cell phone battery. My friends tell me that’s the most likely problem, although I suspect some of the apps (Facebook, Google, etc) are still running even when I think they’re off, sending personal data to advertisers and Vladimir Putin. Then again I’m a cynic, so I would think that. Wouldn’t I?

Sunday was a motorcycle day. I rode the Goldwing to the top of Mount Lemmon and back, 58 miles door to door, breaking in a new wide-angle lens attachment at the Geology Point lookout. Long as I’m doing triple thumbnails, here’s the evidence from Sunday:

This is the day bloggers tell you what they were doing on the morning of September 11, 2001. I checked that square several anniversaries ago and feel no urge to relive it, just as, I’m sure, you feel no urge to read another remembrance. No disrespect toward the victims of 9/11 intended, but I say if you stack American deaths from overseas terrorism up against American deaths from domestic gunfire, it’s firearms and their mostly white male users, not Muslims, we should be banning until we figure out what the hell is going on.

Now for a story which, unlike my mundane activities 17 years ago this morning, I don’t believe I’ve shared before.

Shortly after we moved into our house in northeast Tucson, almost 20 years ago, Donna told me she’d seen an ostrich in front of someone’s house on the main road near our new neighborhood. For years, every time I drove down that road, I’d look for the ostrich. I had the location narrowed down to a couple of adjoining horse properties near where she’d said. It had to be one or the other: each place was a mini-ranch with barns, sheds, and paddocks, ideal for horses and therefore ostriches … yet no matter how many times I drove by, which was almost daily, I never once saw the mysterious ostrich. 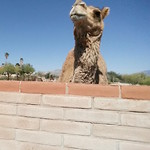 A couple of years ago Donna and I were driving down the main road and I said, “Say, I’ve been meaning to ask, exactly where is that ostrich you told me about?” And she says “What ostrich?”

After a brief conversation it transpired that the animal she’d seen all those years ago wasn’t an ostrich but a camel, and it didn’t live on the main road but on a small side street. We turned back to find the side street and lo, there it was.

Today, when we have visitors trapped in our car, we take them to see the neighborhood camel.

I have to say, though, that even though the mystery of the invisible ostrich has been solved, I still find myself looking for it when I drive down the main road.