Banned Books Week is September 23-29. In honor of those who fight to protect our right to read and write, I offer my annual rant.

Every year conservative pundits line up to tell us Banned Books Week is a hoax, claiming books aren’t banned in the USA. In the years I’ve been writing these YCRT! posts, more than one reader has called me a liar for saying books are banned. Here’s my response:

I find I have to explain my use of the word “banned” every now and again. My position is this: any time people try to keep people from reading a book, they’re attempting to ban it.

Regardless of whether the same books are available on-line or in local bookstores, the intent of parents and school administrators who take these actions is to keep others from reading the books in question. This is the very definition of banning.

The government no longer bans books at the national level, but it used to. Henry Miller’s novel Tropic of Cancer, for example, was banned in the USA from its publication in 1934 until the Supreme Court overruled the ban in 1964. Even during the days when books were literally banned in the USA, though, conservatives advanced the argument that such books weren’t really banned, because you could always board an ocean liner, sail to Paris, and buy copies there. Conservatives today recycle the same argument: you can buy “Captain Underpants” and “Heather Has Two Mommies” from Amazon, so what’s the problem with removing them from the children’s section of the library?

Book banners want to control what other people read. They may no longer be able to ban books nationwide, but they’ll do whatever they can to get books they disapprove of banned from libraries, bookstores, and school reading lists. Sometimes they succeed, and banned books are the result. These are the correct words, and that is why I use them here.

… to prohibit especially by legal means (ban discrimination); also: to prohibit the use, performance, or distribution of (ban a book) (ban a pesticide)

Under examples, they include this:

Yes, Virginia, books are banned in the USA, and they’re banned all the time. When people quit trying to prevent me or my children from reading books they don’t like, I’ll quit using the word, but not until then.

“… surveys indicate that 82-97 percent of book challenges—documented requests to remove materials from schools or libraries—remain unreported and receive no media [attention].” An interesting overview of Banned Books Week (celebrating its 36th anniversary this year), with particular attention to California and the burning of Steinbeck’s “The Grapes of Wrath.” 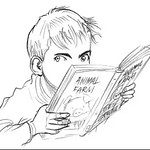 Illustration from “Why Our Future Depends on Libraries, Reading and Daydreaming,” a graphic essay by Neil Gaiman and Chris Riddell.

Challenges to and attempts to ban classic and prize-winning books in Texas schools and libraries, reported in several previous YCRT! columns, continue apace. This article includes a synopsis of the top ten most challenged books of 2017, compiled by the American Library Association.

Waiter, there seems to be a threat in my word salad: “Google search results for ‘Trump News’ shows only the viewing/reporting of Fake New Media. In other words, they have it RIGGED, for me & others, so that almost all stories & news is BAD. Fake CNN is prominent. Republican/Conservative & Fair Media is shut out. Illegal? 96% of results on ‘Trump News’ are from National Left-Wing Media, very dangerous. Google & others are suppressing voices of Conservatives and hiding information and news that is good. They are controlling what we can & cannot see. This is a very serious situation—will be addressed!” —Donald J. Trump on 28 August 2018, in a now-deleted but widely documented tweet.

Facebook, as I expected based on past performance, is once again caving to the right-wing noise machine. Wonkette has the best headline so far: Facebook Is Letting Rightwing Shitrags “Fact-Check” Liberal Sites. You Won’t Believe What Happened Next!

Well, Hallowe’en is right around the corner … here’s how you can prepare your kids for the latest Satan-inspired books!