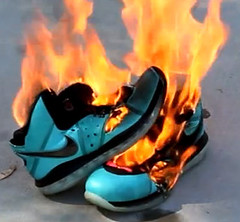 Well, Nike’s done it now. Endorsing Colin Kaepernick was a fatal mistake, and the shoe giant is destined join other once-famous brands on the dustheap of history. Not even the biggest corporations can stand up to the wrath of good old American racism.

Amazon, Apple, Google, Disney, Microsoft, Target, Intel, Johnson & Johnson, Costco, CVS: at one time these major corporations were household names. But then they embraced progressive causes and patriotic Americans turned against them. Where are they now? Gone. Vanished.

Indeed, the MAGA Nike boycott has begun. My favorite so far: the dude who set his Nikes on fire while wearing them, then later posted emergency room photos of his burned feet. Oh wait … that one turned out to be a hoax.

I posted a bit of snark on Facebook this morning: “I’m in the market for a new pair of athletic shoes. Can anyone recommend a good brand?” The responses so far indicate a general lack of awareness about what’s going on with the own-the-libs-by-burning-our-Nikes movement. I’m not an emoji person, but I went back and edited the post to add a winky one, meant to indicate the ironic nature of my comment. 😉

Athletic shoes offer a smooth transition to athletic feats, and here’s one I’m proud of: this is me two days ago, breaking in my new knee on a mountain bike:

This was after I got back from a 25-minute ride around the neighborhood. I coaxed Donna out of the sewing room to come take an iPhone video of me riding up and down our cul-de-sac. If you’ve been following my knee replacement saga, you know getting back on my bicycle was one of my goals. I’ve been working out on a stationary exercise bike, but riding a real one presents its own challenges. When I first got on the bike Sunday morning I didn’t even make it to the end of the driveway, the pain at the top of each pedal rotation was so sharp. I got off the bike and did some knee-bending exercises, and that made all the difference.

It’s been 55 days since the knee replacement. Things are going very well. I’m back on the motorcycle as well, but I marked that milestone in an earlier blog post and won’t belabor it here. I will add this: the Goldwing’s battery died over the summer and I had to recharge it. My friend and motorcycle maintenance guru Ed said I should come over so he could put his meter on the battery and make sure it was okay, so I rode over last Friday. I parked in the driveway between Ed’s garages and turned the key off. Ed came out with his tester and checked the battery out. Twelve volts and change. Then he asked me to start the engine so we could make sure it was getting a charge from the alternator. I turned the key and … nothing. All the right lights came on, but there wasn’t even a click from the starter.

How can it be, I wondered, that everything could be working normally until that exact moment? Ed had some spare microswitches, so we tried swapping out my old ones. There’s a switch on the kickstand, for example, that prevents the starter motor from working if the stand is down. We replaced it but it still wouldn’t start. So we went inside, fired up Ed’s computer, and visited a couple of Goldwing owners’ forums. Lots of Wing owners had experienced similar problems, and the most likely culprit was a switch on the right handlebar, a switch that performs a different function but is wired into the starting circuit. We went back out with a spray can of electrical contact cleaner and spritzed the hell out of that switch, and by golly that was it.

I started the engine and we verified the alternator was putting a good charge on the battery. Then I mentioned a stuck switch on the left handlebar … last time my son visited we swapped motorcycles and he tried to start my bike with the radio mute switch, which has been stuck in mute ever since, four or five months now … so we sprayed the hell out of that too and now I have a radio again.

There were some additional minor (and mysterious) electrical glitches, but when I got home I sandpapered the battery posts and leads and they all went away. That’s a lesson I learned a few months ago with our pickup truck: when strange electrical things start to happen, check the battery connections.

Progress on all fronts: that’s what I like to see.

Now to go shopping for a new pair of Nikes.