Progress report: my knee still aches (with occasional sharp nerve twinges) and I still walk like Festus, but the home exercise routine is going well, the outpatient physical therapy at the orthopedic institute even better, and the swelling has almost disappeared. Tomorrow I see the surgeon who replaced my knee and who will, I hope, remove the 30 metal staples from the 8 1/2-inch wound on my leg. You scoff? Count ’em. I’ll wait. 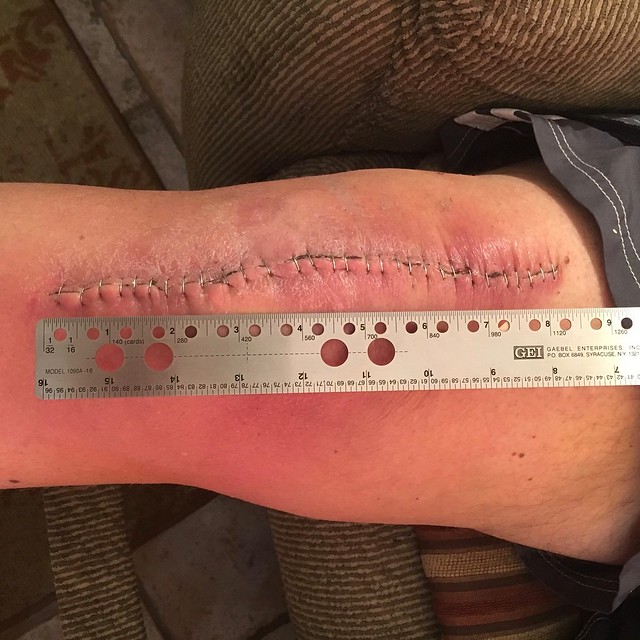 Sorry about the cheesecake. I don’t normally expose myself that way.

I’m increasingly restive, what with nothing to do at home but sit or nap or do knee bending and stretching exercises. It’s hard to sit at the office desk and write blog posts or letters … unless I get on a tear over something or other and distract myself enough to forget about my knee for a while. Donna continues to be a saint, which means I’ll have to be a saint to her if she ever needs one, and I hope I have it in me.

We bought airline tickets for our trip to Missouri in October, along with a rental car for the drive from St Louis to Cape Girardeau and a few days in Ohio (Dayton and Elyria, then a long drive back to St Louis and the flight home). Now to book motel rooms, and we’ll be set.

I committed myself to working at the air museum for half a day next Monday: one tram tour. I plan to be back on my regular all-day schedule (which, this time of year, amounts to two tram tours) by the following Monday, the 6th of August. In my absence (actually only two Mondays so far) one of our two new electric trams has arrived and they should have started checking out tram drivers on the new equipment. One new aircraft has gone on display, a T-34 trainer, and by Monday the P-40 Warhawk should be out of restoration and on display in one of the WWII hangars. So expect another air museum photoblog soon!

Speaking of which, when people call blog posts blogs, it’s fingernails on a blackboard to me. Paul’s Thing is a blog, and the entries I put up here are blog posts. But then we come to photoblog. I suppose if you have a blog that is all photos, it would be a photoblog, and individual photo posts would still be posts, but for some reason I’m okay with calling a photo post a photoblog. Probably because everyone else does it. Back in the day blogs were called diaries, and individual posts were diary entries, and if everyone had stuck with that formula none of this would be an issue.

The naked emperor seems panicky and desperate lately, his act more of a clown show than ever. I just can’t take anything he says seriously, though I know I must. The man has a lot of power, and he’ll use it if he feels threatened. I would never ask for a coup, but I sincerely hope our military leadership is prepared to resist an impulsive order from what Putin now calls the “supreme commander in chief.”

Trump’s desire to replace the Kennedy paint scheme on the new Air Force Ones is worth watching. Nothing stays the same forever, but I deeply distrust this man and plan to follow the story closely. I don’t think he’s making all these changes out of any desire for change or improvement. He’s merely destructive, spitefully undoing what previous administrations have accomplished, especially previous Democratic administrations. He can’t stand it that he isn’t admired the same way previous presidents are. I don’t think he’s quite figured out that most of us don’t think of him as president, what with him and his masters stealing the election from the president we voted for and all.

The last two days have been super hot and I’m thankful the electricity hasn’t gone out. Two or three years ago, it likely would have, and at the hottest time of day. We must count our blessings.