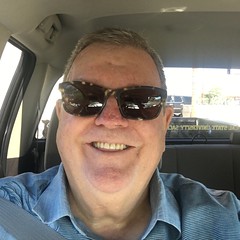 I steeled myself for a stern lecture and a return to white pads and tape, but the dermatologist’s nurse practitioner (the nice one!) took one look at my skin graft Tuesday and said “Let your nose shine out upon the world for all to see.”

So here it is, in its bumpy, slightly discolored, W.C. Fieldsian glory. Children may clutch their mothers’ skirts and ask “What’s wrong with that man’s nose?” but at least they won’t run away shrieking. And I can live with that.

Two hospital gym PT sessions down now, both leaving me feeling better than before. For hours, in the case of the second workout. Eight to go, spaced out twice a week into mid-August. I’m getting into the home exercise routine for the days in between and feel I should soon be able to drive myself around again. I keep the walker at my bedside for when I get up in the night and first thing in the morning, the times when the painful shock of putting weight on the new knee can still make me wobble; otherwise I get around with a cane. So. Progress. And as I remember from my first knee replacement in 2013, once progress becomes apparent, getting back to normal follows quickly.

My motorcycle guru and buddy Ed called while Donna was driving me home from PT yesterday. He had just caught up with my blog and wanted to check in on me. And I him, since he had some pretty serious eye surgery a while back. It was wonderful to talk with a friend, and on top of that I had just exchanged letters with another friend back East, and written to yet another old friend in California. Inspired by all this friend activity … the real kind, not the Facebook kind … Donna and I sat down with the October calendar and mapped out a day-to-day itinerary for our upcoming trip to Missouri and Ohio: Woodfords Tour Trump Country 2018 (Good Thing We’re White). More on the big trip as we close in on it.

Pima Air & Space Museum, where I volunteer as a tram tour guide, is prepping two military helicopters for display. Before each tram tour I ask visitors if they want to see or know more about any particular aircraft, and as often as not they ask about helos we don’t have: these two in particular, the Sikorsky Blackhawk (or one of its many variants) and the Sea Knight.

During the past year we’ve added two British military helos, Royal Army and Royal Navy versions of the Westland Lynx, but we haven’t had any newer American helicopters to show since I’ve been volunteering, eight years now. Visitors want to see helicopters they or a loved one flew, crewed on, or maintained when they were in the service; most of our helicopters flew in the Vietnam and Korean Wars but the bulk of our visitors served (or know someone who served) during Desert Storm and the post-9/11 wars in Afghanistan and Iraq. I’m glad we’ll soon have helos of their era to show them.

As you can probably guess, I’m itching to get back to doing tram tours at the museum, but it’s going to be a few weeks before I can handle all the walking that’s involved.

Donna and I are as wrapped up in the news as anyone else, and as frustrated. Didn’t we know all this stuff about the Russians and hacking into DNC databases and interference with voting machines back in 2016? Maybe not the names of individual Russian agents, but most of the details of how they were doing it? Wasn’t it obvious from the start that Putin dictated changes to the Republican platform in the lead-up to the GOP convention that nominated Trump? Wasn’t it also clear to everyone at the time that Putin forced Trump to change his choice for secretary of state from Romney to the unknown Tillerson? Yes, we did know all that stuff. Rachel Maddow among others has been reporting it from day one. Hillary Clinton outlined the Trump campaign’s involvement with Russia in detail. All this stuff was covered, then forgotten, then remembered again, but reported on as if new. We knew. And we know. The election was stolen, and Trump is quite literally Not Our President. Nor was he ever.

And what are we going to do about it?

Vote in November, I hope, but I sure worry about that. What are Democrats doing to inspire voters? Not much.

Damn, I hate to end on a gloomy note, but I have a book review to write and knee bending and stretching exercises to do, and have to move on. More soon!