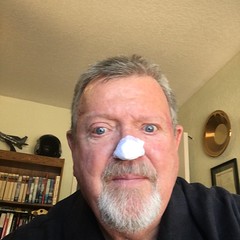 Progress report (or lack thereof): the skin graft isn’t taking. I feared that might be the case, and now the dermatologist has confirmed it. He cut off the top layer, which was scabbed over, yesterday morning. He said we might have to try another. After he left the room I asked the nurse practitioner what would happen if we didn’t. She said I’ll eventually grow new skin and it’ll heal. I said that’s good enough for me. I don’t want to endure another skin graft, because if the first one failed there’s no reason to think a second attempt will work out any differently.

So this is the face I’ll show the world, likely for the rest of the summer. My morning routine will include removing yesterday’s dressing, soaking and cleaning the wound on my nose as best I can, swabbing it with vaseline, and putting on a new dressing. I’ll have to see the nurse practitioner weekly (as I have for the past month).

A good part of July will be down time anyway, because I’m having my second knee replaced on the 10th. The museum knows I won’t be in for three or four weeks afterward. My nose might as well heal while my knee does. My goal is to be recovered, nose and knee, by the end of August. I’m laying in a stock of books on the Kindle. And who knows, I might get some writing done. 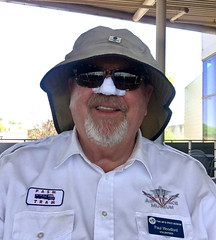 Not that I’m going into hiding, just planning on taking it easy while I care for my nose and do physical therapy with the new knee. I went in Monday for my volunteer shift at the air museum. With a white nose poking out beneath dark sunglasses and a big floppy sun hat, I must have looked like the Invisible Man … but everyone was cool with it, or at least they didn’t point and laugh.

Three more museum Mondays remain before knee surgery, and I plan to do them all. Tomorrow there’s a book club meeting, and in the evening company’s coming over. I won’t be out and about for a couple of weeks after the knee surgery, but the nose? Pffft. People are just going to have to get used to seeing me like this. I’m not going to feel sorry for myself. It is what it is.

Mr. B gets ticks constantly. Maxie never does. A mystery? Not really. Mr. B pees on bushes, brushing up against them in the process. Maxie squats over the ground. I’m pretty sure that explains it. The nurse practitioner at the dermatologist’s office, who used to be a vet tech, told me to try a topical ointment called Frontline. You rub it between your dog’s shoulder blades once a month. The local feed store wanted $52 for three month’s worth so I ordered it from Amazon, which sells it for $35. Chewy.com, where we get our dog food, sells it for $60, but it’s a six-month supply, so really only $30. Hoping it helps … but we’ll continue to check Mr. B over daily, as we have been doing. And Maxie too, just in case.

I mentioned friends coming over tomorrow night. It’s our cooking club, coming out of a long coma. We’re going to prepare and devour entrées from Reuben’s Restaurant, a famous (no longer in business) California institution: shrimp scampi and sautéed artichoke hearts. Apparently these were enormously popular menu items back in the day, with websites and forums devoted to reconstructing the recipes. We’re also making a watermelon salad, rice pilaf, and having strawberry shortcake for desert.

Mr. B is by my desk in his office bed (as opposed to his bedroom or family room bed), chasing something in his dreams. Muffled little barks, twitching paws. Donna’s out shopping for tomorrow’s dinner. Polly’s at work. A quiet day. Enjoy your quiet days … you never know how many you have left.

One thought on “Whinge-Bag Friday”