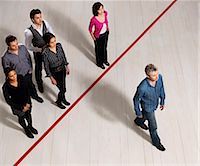 Donna visited a friend last night. Despite a mutual agreement to avoid politics, conversation turned to the administration policy of taking children from would-be immigrant parents crossing the southern border of the US. Her friend … not for the first time … came down hard on the racist MAGA side: it serves them right; the kids are being used as props to garner sympathy; ask any Border Patrol agent and they’ll tell you the “parents” abandon them in the desert as soon as they cross over; it’s all part of an orchestrated plot to make Trump look bad, and so on. Donna came home angry and sad, and … not for the first time … said her friend was no longer the person she thought she knew and that she didn’t know if she could see her any more.

We faced a similar dilemma last December, when a couple we’ve known for 20 years invited us over for dinner. These friends have always been staunchly conservative, but more on the “country club Republican” end of the scale. Or so we thought. We were horrified when they turned out to be Trump supporters; going out on a limb for him on Facebook before the election, then voting for him, then continuing to vocally support him through all the horrors of his first year in office. Here’s what I wrote then:

I went on to recount a personal experience that still sickens me, thirty-plus years later:

Lumping Trump supporters in with pedophiles may have struck some of my readers as over the top, but the comparison comes back to me in light of what’s going on today with Trump, Justice, Homeland Security, the Border Patrol, and Immigration & Customs Enforcement. I was shocked to learn a person I thought of as a friend was a pedophile; I’m just as shocked to hear friends and acquaintances defend the violent snatching of children and infants from parents trying to escape poverty and violence, and the incarceration of those children and infants in cages and concentration camps.

Last December, dinner was postponed and we were able to put off deciding whether to continue socializing with our Trump-loving friends. Now, though, a line has been crossed. Friends and acquaintances who still defend and support Trump are now former friends and acquaintances, and forgiveness is not in the offing.

Up to, say, inauguration day, Trump voters could reasonably claim they liked his policies but rejected his racism and nationalism. If they still support Trump today they can no longer claim exceptions. They’re all in. They crossed the red line. They done rubbed up against shit and the stink ain’t ever coming off.

This isn’t “politics.” This isn’t progressivism versus conservatism. It’s Morality 101. Sadly, though, the political process is our only hope of changing things. God damn it, friends, I know Democrats are spineless and uninspiring, but we have to vote the Republicans out this November.