You Can’t Read That! Banned Book Review: The Hate U Give 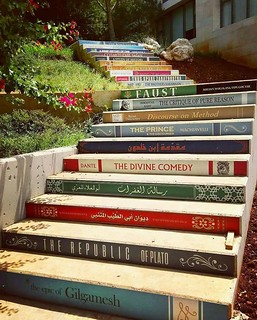 Another in a long line of dead white male writers whose work would make today’s college students squirm (if anyone still read him): “And where science has not reached, men stared and feared, telling one another of the wars and pestilences that are foreshadowed by these fiery signs in the Heavens. Sturdy Boers, dusky Hottentots, Gold Coast Negroes, Frenchmen, Spaniards, Portuguese, stood in the warmth of the sunrise watching the setting of this strange new star.” —H.G. Wells, “The Star” (1897)

Is anyone worried Facebook will cave to right-wing media pressure, as they did two years ago when they quit curating their news feed and allowed the MAGAs to fill it with propaganda? I am. Of particular concern: conservative members of Congress are beginning to pile on.

Federal prisons have abruptly canceled a policy that made it harder and costlier for inmates to get books.

A bill working its way through the California legislature would ban the advertising of anti-gay therapy. The religious right claims it’s an attempt to ban the Bible.

I don’t suppose it’ll come as a surprise that student newspapers at Christian colleges are heavily censored. Some student journalists are beginning to fight back.

A senior editor, along with two colleagues, resigned after his employer, the Denver Post, spiked his editorial about censorship at that newspaper.

I think this long and convoluted American Library Association position paper against librarians “purposefully omitting certain books and content from library collections due to personal bias opposed to professional judgment” is mostly about pulling books by authors at the center of #MeToo sexual harassment and abuse complaints. Is this actually a thing? Apparently it is.

“I feel like someone is pushing an agenda on these little kids … I love Battle of the Books; I’m a huge advocate. That’s why when ‘George’ came on the list I was like, ‘Why? Why did they do this?’” In Oregon, school districts are pulling out of a statewide school reading challenge because one of the books on the list is about a transgender child.

From a NYT essay titled Why “Fahrenheit 451” Is the Book for Our Social Media Age: “As the virtual world becomes more dominant, owning books becomes an act of rebellion. When a printed book is in your possession, no one can track, alter or hack it. The characters in my film have never seen a book. When they first encounter a library, the books are like water in a vast digital desert. Seeing, touching and smelling a book is as alien to the firemen as milking a cow by hand would be for most of us. The firemen are transfixed by the books — but they still have to burn them.”

Lori, a fan of YCRT! on Daily Kos, writes to ask a favor: would I mention her dKos Readers & Book Lovers group book club, and its upcoming read “The Name of the Rose” by Umberto Eco? I would.

A young adult book titled “The Hate U Give” has been the target of recent challenges and bans, and has featured in several recent YCRT! columns. I decided I’d better read and review it: 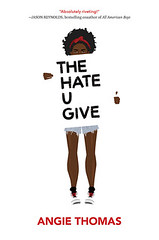 The Hate U Give
by Angie Thomas

First of all, what’s “The Hate U Give” about? Here’s the blurb from Goodreads:

Sixteen-year-old Starr Carter moves between two worlds: the poor neighborhood where she lives and the fancy suburban prep school she attends. The uneasy balance between these worlds is shattered when Starr witnesses the fatal shooting of her childhood best friend Khalil at the hands of a police officer. Khalil was unarmed. Soon afterward, his death is a national headline. Some are calling him a thug, maybe even a drug dealer and a gangbanger. Protesters are taking to the streets in Khalil’s name. Some cops and the local drug lord try to intimidate Starr and her family. What everyone wants to know is: what really went down that night? And the only person alive who can answer that is Starr. But what Starr does—or does not—say could upend her community. It could also endanger her life.

Now for my review.

I’m not going to try to say anything profound about the racism that permeates our society. Angie Thomas does a fine job laying it out. Nor will I say much about the plot, since it’s well covered by the blurb.

“The Hate U Give” brings it home in a relatable way, because teenaged students are the primary characters of the novel, and they’re the ones who tell it, through the voice of 16-year-old Starr Carter.

Why am I, an admitted elder, reading YA? Because this YA novel has been challenged and banned, and I think we’re only seeing the beginning of organized attempts to keep young people from reading it. The first ban went down in early 2017 at a high school in Katy, Texas, where an administrator pulled the book after parental complaints (it was later put back on the shelves, but students now need their parents’ permission to check it out). The book was pulled again at a middle school in Springfield, Missouri, early this year, and as far as I know has not been returned to the shelves.

In keeping with the long-established pattern of attempts to keep social issue YA literature out of classrooms and school libraries, opponents of “The Hate U Give” cite sex, bad language, and use of racial epithets. As with other banned YA books I’ve studied, though, the real reason is uncomfortable subject matter, always. YA books with LGBT themes or characters, for example, are almost universally challenged and often banned. So are YA books that challenge authority, especially if those books have a racial theme.

You don’t have to look any farther than reader questions and reviews on Amazon or Goodreads to see the proof of that. Here are actual questions Goodreads users have asked about “The Hate U Give”:

Their questions make it clear they have no intention of reading the book. Most people who have read it love it, but not all. Here are some selections from negative reviews on Goodreads:

It’s not bad language. It’s not sex. Complaints about the use of racial epithets come closer to the truth: discomfort with talking about race; opposition to change; anger over negative portrayals of white people; the authoritarian mindset that police are never wrong and the oppressed should mind their place and learn to get along.

These are the same reasons books like “Huckleberry Finn,” “To Kill a Mockingbird,” and “The Absolutely True Diary of a Part-Time Indian” are challenged and banned.

The young are our only hope for change. That’s why the young need to read this book.

Finally, a few words about my rating. One feels obliged to give any social issue YA novel as high a rating as possible, but I can’t honestly put Angie Thomas’ “The Hate U Give” on the same level of excellence as YA fiction like Paolo Bacigalupi’s “Ship Breaker” or M.T. Anderson’s “The Astonishing Life of Octavian Nothing, Traitor to the Nation” series. From me, 3.5 stars is a very good rating. This, too: I’m an adult (actually a senior) reading a book targeted at middle and high school teens. If I were the target, I’d give it all the stars.