I took a fall in San Diego last week. Nine days it’s been, and I’m still recovering. They say men over 60 should stay off ladders. Well, someone on Twitter said it at any rate, and I agree. And men over 70 shouldn’t walk while looking through a camera viewfinder. I said that, and have the bruises, scrapes, and aches to prove it.

The road rash on my right knee and elbow is at the most gruesome stage of scabbing over—my dermatologist nearly fainted while looking me over for skin cancer this morning. When he got his breath back he asked if I would have fallen 20 years ago. No, I said, I’d have still tripped, but I’d have recovered and stayed upright. Well, he said, you need to get some of that youth back. Work out, improve your flexibility, lose weight. Right, I said to myself.

And while he was shaming me, he found three new basal cell skin cancers: left temple, right temple, tip of the nose. 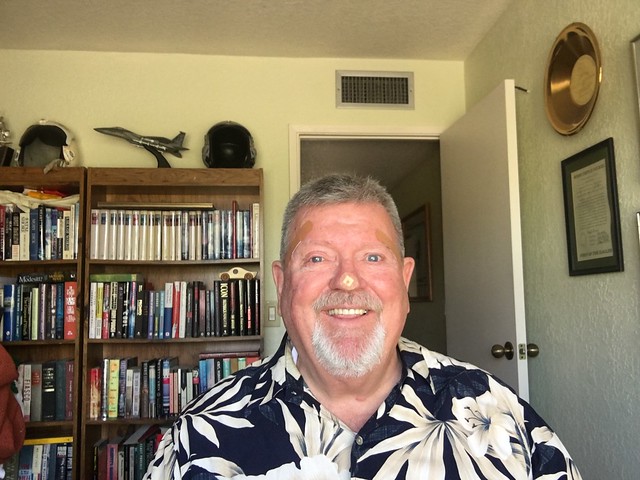 The bandaids cover the snips where he took tissue samples to have biopsied. It’ll be Kotex-sized pads after surgery, probably two weeks from now. Not sure what to think about the triangular symmetry of these spots … is that even natural? But hey, we didn’t bleed on the shirt, so there’s that.

Some of you participated in a Facebook boycott yesterday. I hate to kick a billionaire when he’s down, so my boycott wasn’t about Cambridge Analytica … it was an exercise in self-control. Could I make it 24 hours without clicking on the big blue F? Yes, I could, and did. Now that I’m back on, I see I didn’t miss a goddamn thing.

I checked into Twitter a few times to see how my Facebook-hating brothers and sisters were getting along. Wow, you’d think there’d never been a movie about the early days of Facebook, showing how Zucky’s empire grew out of an online application called Facegrab, where male Harvard students could rate female Harvard students’ faces as hot or not. Because social justice warriors on Twitter are pretending they’ve never heard of anything so shocking before.

Well, enough of that. Another trip to the Goldwater Range near Gila Bend is in the offing, organized by a friend at the air museum. This time Donna gets to come along. Hoping for some good high-speed photos of A-10s going BRRRRRRT. And you know if I get ’em I’ll share ’em!

You may notice a few changes from your last visit to Paul’s thing. I’m playing around with typefaces and cleaning up the sidebar. More changes to come. It’s spring, and I feel the need for speed change.