Whatever Happened to “It”? 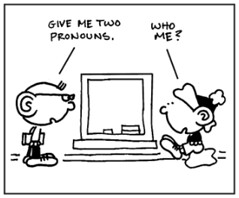 The other night Jimmy Kimmel described Meryl Streep as an actor, and everyone carried on as if it was some kind of big whoop moment. But why should it have been? Every year I ask myself why we still call woman actors actresses, when feminine labels have vanished from other professions. When’s the last time anyone talked about aviatrixes or girl reporters? (Don’t ask me about waitresses, because I don’t have a snappy comeback for that.)

I posted a sarcastic question on Facebook: “If we quit making a distinction between actors and actresses, won’t there be fewer awards? Asking for a friend who thinks this might be a good thing.” This prompted some of my friends to start a discussion on personal pronouns, like the ones in this table put together by the Lesbian, Gay, Bisexual, Transgender, Queer, Intersex, Asexual Resource Center: 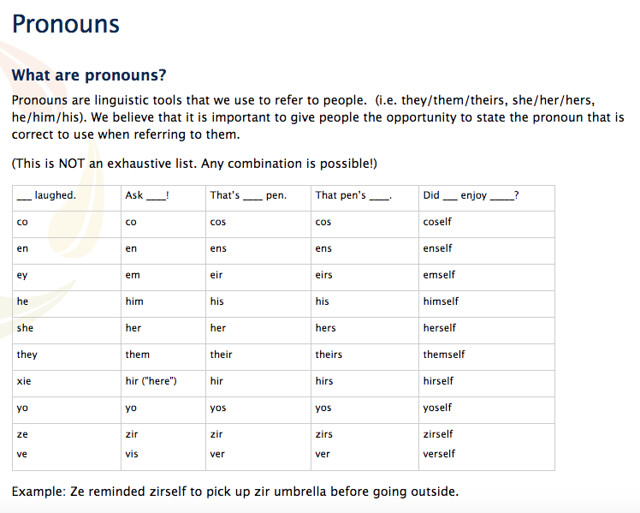 I get a headache looking at that. I think I know why: the translation key, the three lines starting with the pronouns we all use daily, he/she/they, is in the middle when it should be at the top. No doubt the good youmyns at LGBTQIARC thought if they put the real pronouns first it would imply rank. Thus, “co” is equal to “he” or “she.” Or “ze.” Dear god.

My default mode is to snark on stuff like this (“Thanks, Obama!” or “This is the world liberals want”), but I’m not a total caveman. I no longer use “he” or “mankind” to refer to men and women collectively. I use “they” and “humanity” (and I’m increasingly suspicious of the “man” in “humanity”). But when it comes to made-up pronouns like “ze” and “ey,” I call BS.

A lot of the BS is driven by the transgender community, which keeps moving the goalposts around. If a man or boy decides to live as a woman or girl, I have no problem calling her that. Or vice-versa. But subsets in the community demand increasingly specialized pronouns to reflect their self-proclaimed status as transsexual, non-binary, gender fluid, and genderqueer. I’m too old to keep up with it, I guess, and in any case, just how many “zes” and “zirs” are we talking about here? According to this study, 1,397,150 people, or 0.58% of the U.S. population.

I suppose if I knew anyone who was transgender, or had a family member in transition, I’d give more of a shit about their feelings. Perhaps if I worked on a college campus with a small but vocal genderqueer community, I’d try harder to respect their wishes. But I don’t. Most of us don’t. We’re doing better than we used to in terms of regarding women as equal to men, and it’s reflected in our evolving language. Still, gender remains the first thing we see in others, absolutely fundamental in human relations and our perception of one another. It’s going to be a damn long while before regular people give up on he/she/they.

One thought on “Whatever Happened to “It”?”