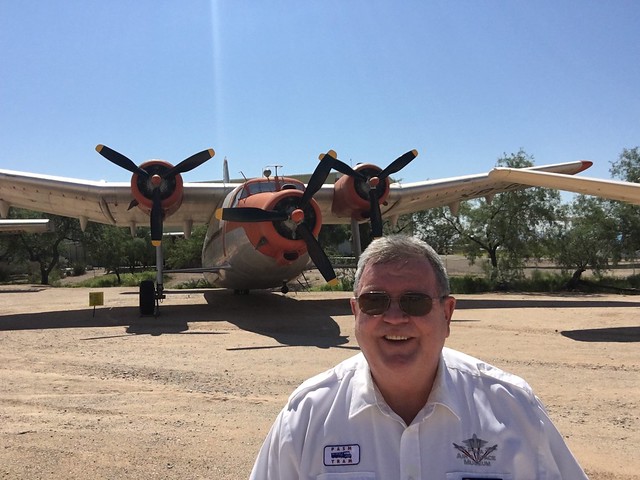 We have an old tri-motor freighter at Pima Air & Space Museum. It’s a YC-125 Raider, one of 23 built by Northrop for the US Air Force, which flew the type from 1950 to 1955. After they were declared surplus, most were purchased by bush operators in South America, Central America, and Mexico. Ours flew for a Mexican air freight company, Triplay y Maderas de Durango, S.A., from 1955 to the late 1960s, and still wears its Mexican registration letters, XB-GEY. It’s one of only two survivors, both on display at US air museums today.

I’m a volunteer tram driver at Pima Air & Space and the Raider is on my route. People don’t get to see prop tri-motors every day, so I always say a few words about the Raider, including its Mexican history. To me, the fact that a US-built cargo plane spent most of its career hauling freight in Mexico is a neutral fact. We do get Mexican visitors, though, and I can see them perk up in the rear view mirror when I mention it.

To other museum visitors, however … generally middle-aged white American men … “Mexico” is a dirty word. When I describe our Raider’s Mexican heritage, I’ll see three or four of these guys behind me grimacing or curling their lips, almost as if they expect a hoard of illegals to spill out the cargo hatch, take their jobs, and start speaking Spanish in the express line at Safeway.

I never react, of course, but it makes me furious I can’t even mention the name of the huge country 60 miles south of here without provoking this sort of reaction from white American racists. I wrote a short Facebook post about this yesterday, sarcastically saying at the end, “Thank you Rush Limbaugh and Fox News for poisoning your fans’ minds.” A friend commented: “So you blame Limbaugh and Fox news for the fact that some of your visitors are racist assholes?” I guess I deserved that humorless response for neglecting to add an I-meant-that-ironically emoji to my original post.

Why yes, people were racist before Rush & Fox News came along, and they’ll be racist long after they’re gone. Duh. What I blame right-wing racist media for is relentlessly slagging Mexico and Mexicans to the point where to much of their audience “Mexico” is now a trigger word. What I see every week at the air museum, this inability on the part of people to hear the mere name of a country without having a visible involuntary reaction, was created by right-wing racist media. These grimaces and curled lips are the equivalent of salivation in Pavlov’s dogs … and far more unattractive.

Well, fuck these racist fucks and the racist media that enables and encourages them. There’s an F-5 Freedom Fighter on my tram route too, an airplane flown by air forces around the world … including that of Mexico, and you can bet I’m going to add that to my list of things to tell museum visitors.

2 thoughts on “Down Mexico Way”