Friday morning Donna said she needed a magnetized bowl to keep sewing machine screws and needles in. You get those at Harbor Freight, and since I love tools I went along. I came home with a breaker bar and 19mm socket to carry in one of the Goldwing’s saddlebags, in case I ever have to change a rear tire on the road (in which case I’m really in trouble, unless there’s a friend nearby who can bring me a fresh tire already mounted on a replacement wheel).

I bought a few additional tools to replace lost and loaned items (essentially one & the same), and that gave me an excuse to clean up the storage area and workbench in the garage. 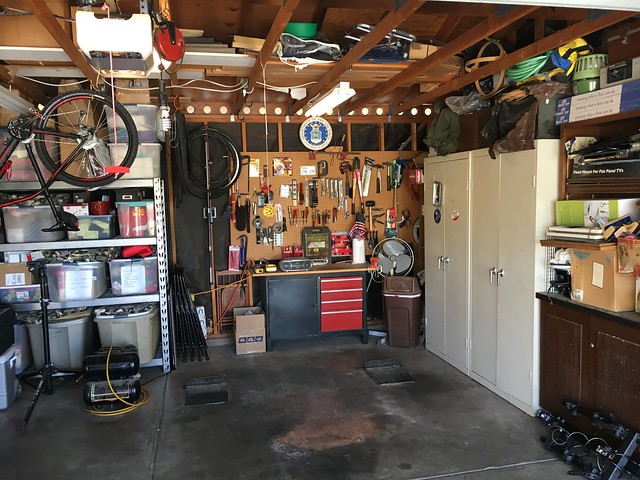 I didn’t do a first-class job, but at least now I can see the surface of the workbench, and if only I can remember where everything is I’m in business. Before you start picturing me as any kind of handyman, though, check this out: 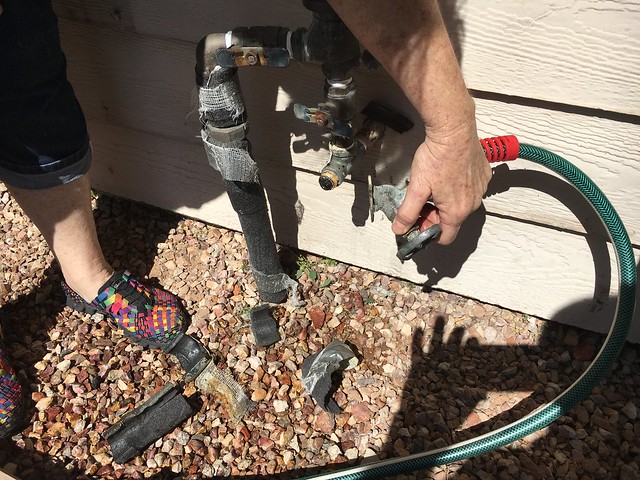 That’s Donna holding a broken faucet. The shadow is me taking a photo for the plumber. After working in the garage I decided to unwrap the outdoor pipes and reattach the garden hoses. When I started to tighten this hose, the faucet snapped off the pipe. There was no shutoff valve so I had to turn off water to the entire house. Luckily for us the third plumber we called said he could come that day, and we had running water just in time for dinner. It’s always nice to have running water when you’re cooking.

Tool-related, sort of: I read an article about fancy wristwatches in The New Yorker. One of my prizes is the Breitling Chronomat I bought in Hong Kong in the early 1990s, my fighter pilot watch. I wore it every day for years, but now take it out only on special occasions. A couple of years ago Donna bought me a self-winding Seiko for daily wear, though I confess my real daily watch is a cheap Casio digital (digitals are so easy: they never need winding and they keep nearly perfect time, unlike even the most expensive mechanical watches). 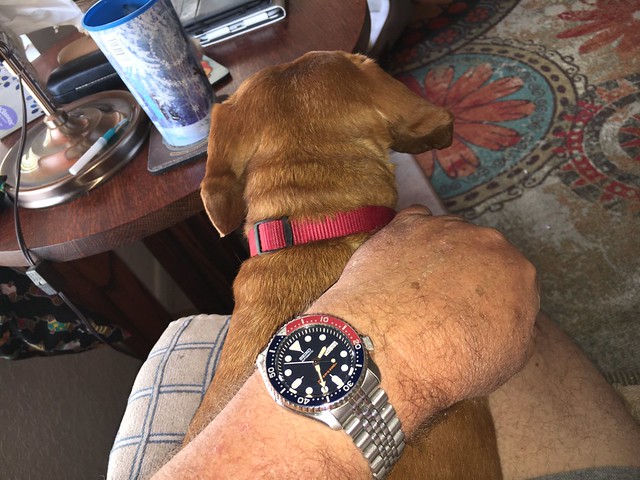 From the article I learned Seiko makes a high-end mechanical called the Grand Seiko. In price, it’s right up there with Breitling and Junghans, though not quite in Rolex territory. My Seiko is not one of those, but it’s a handsome piece, and I decided to take it out and wear it daily for a while. There’s something about a mechanical watch that just appeals to me. Schatzi too.

Speaking of tools, I’ve been thinking about our “leaders” and the corporate interests they serve. Many of us are celebrating this past week’s healthcare news, but I can’t work up much enthusiasm. Trump said he was done with healthcare for now, but he’s already backtracking, and you’re crazy if you think Republicans in Congress are going to quit going after Obama’s Affordable Care Act. If they thought they could get away with it they’d repeal Obamacare with no replacement, and Trump would probably go along.

At least we know public pressure works. That’s one thing we can celebrate. Speaking out to our representatives—in letters and phone calls and town hall meetings—has been effective in terms of scaring them away from the idea of repeal alone. They know they have to come up with something to replace Obamacare. Factional fighting in the Republican Party makes that impossible for now, so the status quo prevails.

Not that the status quo is all that great. Obamacare is at best a half-step toward affordable health care, at worst a giveaway to the American Medical Association, drug manufacturers, and the insurance industry. Worse still, at some point soon we’ll need to increase taxes to pay for it. I can’t see a Republican-majority Congress ever being willing to do that. Can you? Trump and his minions say Obamacare will “explode.” I think “starve to death” is what they actually have in mind for it.

A friend sent me a link to this New York Times “Granny was a Nazi” story. Two lines seem especially relevant to our current reality:

Yeah, I know … but Godwin’s Law was written before we had Steve Bannon, an actual anti-Semite and white nationalist, in the White House, serving as the president’s senior adviser.

I’ll close with a hot take from G.K. Chesterson: “It is terrible to contemplate how few politicians are hanged.”