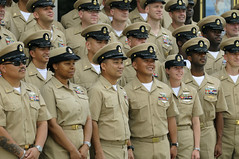 President Truman ordered the integration of the military in 1948. It didn’t happen overnight, but by 1953 and the end of the Korean War it was reality. My dad was Air Force and I grew up going to integrated DoD schools in Germany. My one exposure to official segregation came when we rotated back Stateside and I spent a year in a whites-only school in the Washington DC suburbs. That was in 1958-59. Schools across America were integrating by then (Virginia was a little slow to catch on), and by the early 1960s I was in high school in California and civil institutions were finally integrated, on par with the military.

I’ve always been proud of being part of the first American institution to desegregate and offer equal opportunity to all members. I’m not naive. I know military leaders and many in the ranks bitterly resisted Truman’s executive order. I know there were horrible relapses during the Vietnam War. I know racist beliefs and attitudes linger in the hearts and minds of military members even today. But if you’re military you can’t discriminate or display overt racism, on or off the job. Whether you’re enlisted or commissioned, if you put up a Facebook page with photos of you wearing KKK robes, you’ll be out the door toot sweet.

Maybe you can’t regulate hearts and minds, but you can regulate behavior. That’s the military’s approach to integration, and overall it works pretty well. Over time, being part of a racially diverse team in a workplace where discrimination and displays of racism are outlawed, some hearts and minds will change. The important part, though, is that behavior changes, and in the military it has.

This nude photo scandal, first uncovered on a closed Facebook group for current and former Marines but now expanding to similar on-line groups associated with the Army, Navy, Air Force, and for all I know the Coast Guard, is probably just the tip of an enormous iceberg. It seems the more we try to integrate women into the military, the more such crude, predatory behavior emerges. If I was a woman in the military today, I’d have to assume one or more cleverly-hidden cameras are trained on me at all times, especially in the locker room.

This seems a little different than racism, no? Because this sexual shit is predatory and done on the sly, and the photographs and crude comments are shared behind servicewomen’s backs. When racism pops up in the military, as it still does from time to time, it’s not really predatory. They don’t want to rape you, they just don’t like you. If you’re a victim of racism in the military, you know it right away. It’s in your face and you can report the perpetrators. In most cases (I wish I didn’t have to make that caveat) they’ll be dealt with promptly and decisively.

This is different. Disturbingly so. If you’re a woman, how do you know the guys working next to you or higher up your chain of command aren’t members of one of these secret groups, sharing hidden camera photos of you dressing out for PT and making cracks about your tits? How can you put your trust in anyone?

You can’t argue that it’s okay because the bad behavior happens off the job in secret on-line groups. The photos were taken on the job. Not only that, in the military your off-duty behavior is not your own private business, not if you’re preying on or discriminating against fellow military members. And the servicewomen who have been secretly photographed and made the subject of lewd discussion are affected on the job.

Here’s where I go all simple-minded. Behavior is behavior, and if one kind of behavior can be outlawed, so can another. I’ve been saying this for years, when it comes to predatory sexual abuse of servicewomen: military leaders have had opportunity after opportunity to stomp it out, and they have consistently passed the buck, quashed investigations in order to protect favored subordinates, and even punished the victims. Military leaders IMHO have forfeited all moral authority when it comes to sexual abuse and it is time for civilian leadership to step in, as President Truman did in 1948.

Ha, I wish … does anyone seriously think the current president has the moral authority to pull it off, even if he wanted to?