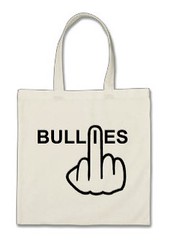 Here you have a schoolyard bully backing a smaller kid into a corner, demanding he hand over his lunch money. Here you have an American president threatening the president of another country with sanctions or penalties if he doesn’t hand over money for a wall he doesn’t want.

The only difference I can see is that the schoolyard bully doesn’t have half the other schoolkids cheering him on.

I knew this was coming: a headline in the Washington Post: What is the ‘Emoluments Clause’? Does it apply to President Trump?*

For months we’ve heard lawyers and political experts tell us about the Emoluments Clause and how it specifically applies to the president of the United States. For months it’s been obvious Trump’s going to ignore it. So I guess it’s inevitable a respected national newspaper would run a headline calling the whole issue into question.

Look, I don’t care if the article emphatically says yes, the Emoluments Clause does apply to President Trump—the goddamned headline normalizes, even confers legitimacy upon, Trump’s flouting of the Constitution.

Fuck the media. And fuck the Democrats in Congress for confirming Trump’s cabinet. Oh, don’t get me started with the fucks. I have way too many to hand out.

I posted this to Twitter Wednesday, three days after weekend tornados wreaked havoc in Mississippi and Georgia: 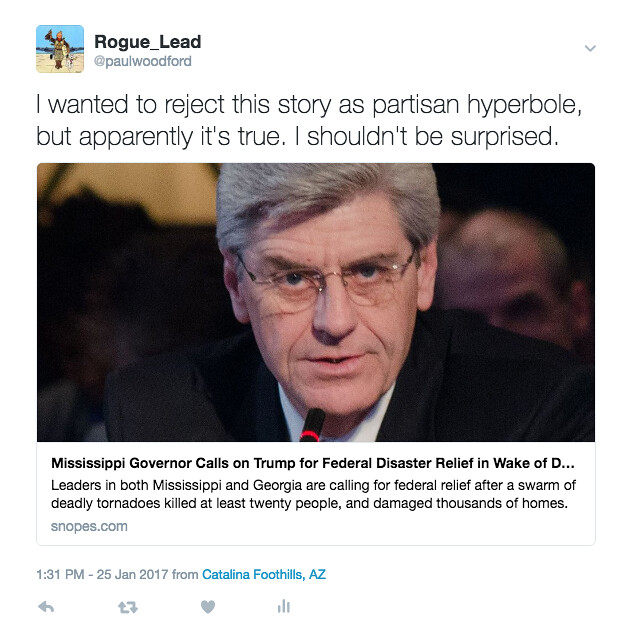 As I said in my tweet, I didn’t want to believe the federal government was ignoring the disasters in those two states, but apparently up to that point it had been. Has it responded since then? According to FEMA, the president declared disasters in both states and released money for relief. That happened sometime Wednesday, presumably after the Snopes story was published. Whew.

But then there’s this, an article published less than a day ago by a Georgia paper, describing private and volunteer relief efforts. It doesn’t mention the president. It doesn’t mention FEMA. So I don’t know what’s up. I did notice Snopes updated its story to mention Trump’s disaster declaration, so let’s hope the federal government is still functioning normally in the face of emergencies. It’s a hell of a thing that basic stuff like this should even be in question, though.

And then Mary Tyler Moore ups and dies on us. Who didn’t love her? A squadron mate once told me he went to college with her son. I don’t know why I remembered that (yes, I do … I’m thinking about her because unlike most actors and public figures she has a place in my heart). The story’s probably bullshit, though.

Another car show tomorrow, this one on a golf course in the resort town of Tubac, just north of The Wall (the one we already paid for). In the evening, a party. Sunday, bicycling with friends. I’m looking forward to a bully-free weekend.

I’m always tinkering with the blog. Last week I added a new feature to the sidebar. Can you find it?

*And what is with those single quotation marks, Washington Post? Are we British now?